Currently, the Chinese Xi’an Aircraft Industrial Corporation is developing a promising strategic bomber-missile carrier H-20. With its help, in the future, a radical modernization of long-distance aviation PLA Air Force. Chinese aircraft manufacturers are in no hurry to reveal their secrets, but foreign experts are still trying to determine the appearance and capabilities of the future aircraft, using the limited available data.

The need to create a new long-range bomber for the PLA Air Force has long been no secret. The first data on real work in this direction appeared in 2015-16. Then, at the level of rumors, mentions of the launch of a promising project appeared in the foreign press, the details of which were not yet available.

Later it became known that the XAIC corporation was developing the bomber, and the project was indexed H-20. The appearance of the car and technical characteristics have not yet been disclosed. However, a few years ago, Chinese aircraft manufacturers published advertising materials in which some unknown planes of a futuristic appearance appeared. It is possible that these images were related to the real H-20 – although this version has not been confirmed or denied officially.

Official structures of foreign countries are showing great interest in the Chinese project. Xian H-20 is regularly mentioned in documents of intelligence and analytical organizations. For example, in October this year, the Chinese project was considered in a regular report by the British Royal Joint Defense Research Institute (RUSI). This publication attracted the attention of the press and became the reason for the appearance of a lot of interesting articles.

There is still very little official information about the H-20 project and it does not answer the main questions. At the same time, a fairly detailed picture has already developed in foreign publications. Moreover, based on limited information, assumptions and forecasts, far-reaching conclusions are drawn. It is obvious that such analytics in the future may crash against real data – or be confirmed.

According to the most popular and plausible version, the XAIC corporation is developing an inconspicuous subsonic long-range bomber of the “flying wing” scheme. It will have to take on board a large number of missiles and / or bombs with a record total weight and deliver them over a long range. In all key characteristics, the future H-20 should surpass the existing H-6 bomber of all modifications. 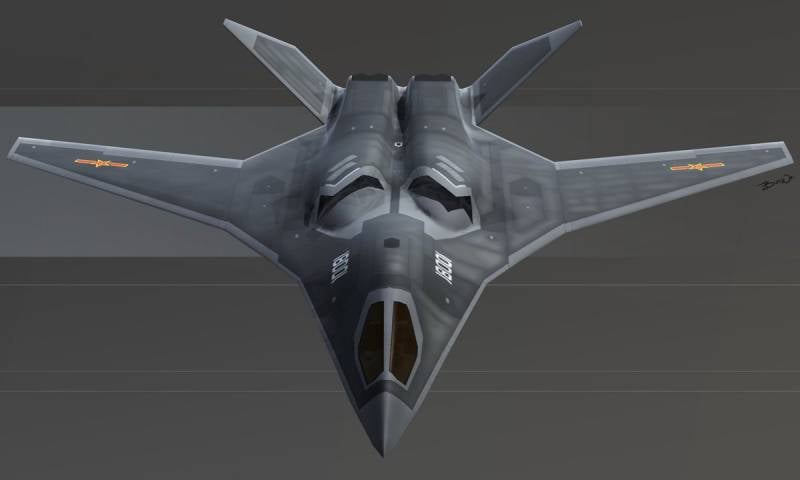 One of the first guesses regarding the appearance of the H-20. Graphics Vpk.name

In terms of its dimensions, the new H-20 will not be inferior to the existing H-6. At the same time, the “flying wing” scheme gives a gain in flight performance, increases the available volumes for fuel and weapons, and also simplifies measures to reduce visibility. In this respect, the newest Chinese bomber is similar to the American B-2A and B-21 aircraft.

The H-20 is expected to be able to fly at high subsonic speeds. The flight range without refueling, according to Chinese and foreign sources, will reach 12 thousand km. This parameter can be increased by using tanker aircraft. Thus, the PLA Air Force will for the first time have an intercontinental range bomber. In this case, the range of its missiles should be added to the combat radius of the aircraft itself.

According to various estimates, the combat load of the H-20 will reach 45 tons. The maximum flight range will be achieved with a load of up to 20 tons. The range of weapons will include ammunition of various types already in service with long-range aviation. In addition, the development of completely new samples with improved characteristics cannot be ruled out. In particular, hypersonic technologies can be used in this area. Obviously, the plane will be able to use conventional and nuclear weapons.

However, more modest assessments are also expressed. So, in September this year, the Pentagon published a report on China’s military capabilities. Its authors believe that the flight range of the H-20 will be limited to 8-9 thousand km, and the combat load will be only 10 tons. It is not known how these estimates correspond to the real project.

The benefits of rearmament

The strategic aviation of the PLA Air Force currently has eight regiments of H-6 long-range bombers of several later modifications. They have at their disposal approx. 160 aircraft capable of carrying one or another nuclear and conventional weapon… Despite all measures to modernize and upgrade, the H-6 bombers are obsolete and seriously limit the development of the potential of the strategic nuclear forces in general. 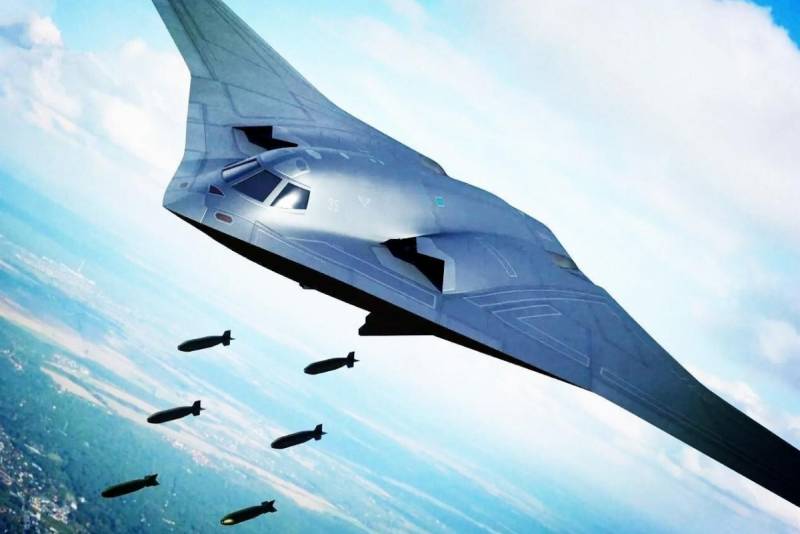 To restore the potential of long-range aviation, massive construction and the introduction of modern technology in the form of H-20 bombers are required. Even estimated and unconfirmed data show that in terms of its tactical and technical characteristics, such a machine will surpass the existing aircraft. In this case, we are talking not only about the advantages in speed and range, but also about other important factors, such as the range of ammunition, stealth, etc.

H-6 bombers, even with in-flight refueling, are able to work effectively only within the so-called. The first chain of islands. The combat radius of promising H-20s is much larger and allows you to control more distant regions, incl. Hawaiian Islands and about. Guam, where the key military facilities of a potential enemy are located. Moreover, an aircraft with a range of up to 12 thousand km will be able to attack targets on the West Coast of the continental United States. Also, foreign experts are expressing concern about the H-20’s ability to operate through the Arctic and “keep at gunpoint” all of North America.

The question of the timing of the appearance of a promising aircraft and the beginning of its service remains open. In 2016-17, when the first reports about the H-20 project appeared, the possibility of performing the first flight within the next 3-5 years was mentioned. How realistic these forecasts were is unknown. If flight tests of the prototype began, then China did not report them, and reliable information did not appear in foreign sources.

Earlier in the foreign media, a version was expressed about a possible public display of the bomber in 2019.The next 2020 is already coming to an end, but the H-20 has not been shown. Next, the forecast for the transfer of the first aircraft to the Air Force in the early twenties will be checked. As before, the accuracy of such estimates remains questionable, and China is in no hurry to confirm or deny them.

However, given the timing of the start of work and the time required, it can be assumed that the rearmament of the long-range aviation of the PLA Air Force really starts no later than the mid-twenties. It is quite possible that by 2025 the first squadrons will be in service, ready to serve and perform combat missions. Later, other divisions will switch to new equipment. 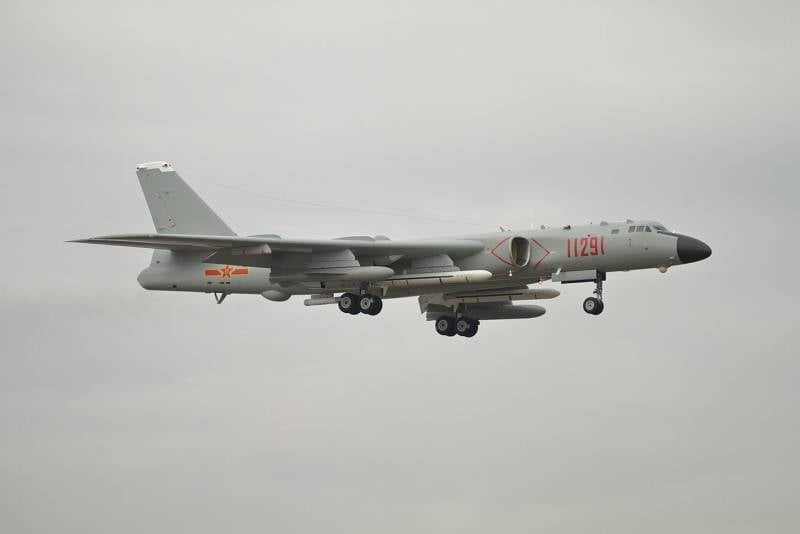 At the same time, the question about the future of old technology remains unanswered. It is clear that the new H-20s will gradually replace the outdated H-6s. However, it is not known whether they will be completely replaced. It is possible that some old model bombers will continue to serve. They will be left with an auxiliary function and, possibly, some tasks not available for the new H-20.

In general, a curious situation is developing around the Xian H-20 project. Work on this bomber continues, and their expected result is of great interest to the PLA Air Force. In the current situation, any modern bomber is capable of dramatically increasing the potential of Chinese long-range aviation. And the emergence of the unobtrusive H-20 with a high range and carrying capacity will be a real breakthrough.

Being extremely useful for China, the future H-20 causes obvious fears of third countries, the territory and areas of interests of which fall into its zone of responsibility. Although the exact characteristics and capabilities of this aircraft remain unknown, all these countries are trying to assess, draw conclusions and take action. How correct these assessments were, and whether third countries will be able to prepare for the appearance of the H-20 will become clear only after its “premiere”.