Russia’s latest super-advanced “Sarmat” intercontinental ballistic missile will receive a hypersonic warhead, weighing 200 tons, and becoming the most terrifying weapon in the hearts of Americans.

The RS-28 (Sarmat) is a Russian liquid-fueled, heavy intercontinental ballistic missile capable of carrying a large-yield nuclear warhead. Since the 2000s, it has been developed by experts from the Markiev State Missile Center (Mias) in the Chelyabinsk region. It is named after the nomadic tribes who lived in modern Russia, Ukraine and Kazakhstan in the 6th and 4th centuries BC.

The missile itself is a “giant heavy bomb” with a weight of 200 tons, with high speed around Mach 20.7, making it difficult to intercept by missile defense means. With a range of nearly 18,000 kilometers, it can reach the United States via Arctic and Antarctic routes. The US interception system is generally deployed in the Arctic and Alaska. Once attacked from the Antarctic, it is difficult for the US to guard against it. But the biggest surprise is its warhead, which can be loaded with hypersonic warheads.

The combat unit Yu-71 has a speed of up to Mach 7. At the same time, the warhead flies along a very complicated trajectory. Details about the progress of hypersonic weapons are kept secret.

Originally, the Russian intercontinental ballistic missile “Sarmat” was already on combat duty three years ago. The “Sarmat” missile system test was postponed for reasons, including the abandonment of Ukrainian components, which takes time to develop and manufacture its own “parts”, and the use of new technologies to solve engine and chassis production, all of which require additional time. According to Russian Defense Minister Sergei Shoigu, it now appears that the test will end this year at the earliest, and from 2022, “Sarmat” will be on service officially.

Sarmat can reportedly load up to 10 large warheads (each weighing 1 ton), 16 smaller ones, a combination of warheads and countermeasures, or hypersonic boost-glide vehicles. The combination of the “Sarmat” and the hypersonic warhead will be unparalleled, and these missiles will become the basis of Russia’s nuclear shield within 30-40 years. 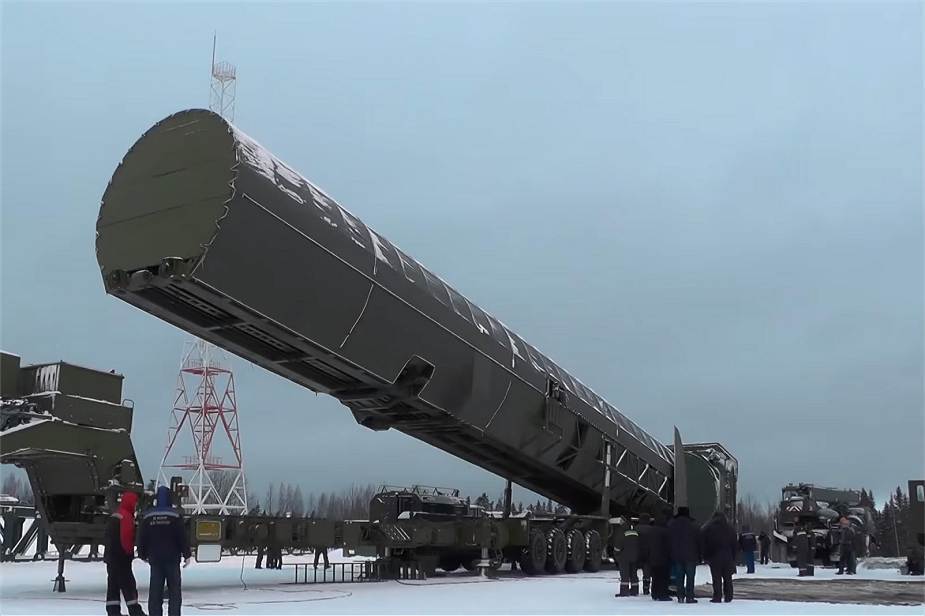 Designed to replace Russia’s aging SS-18 Satan ICBM, the RS-28 Sarmat began development some time in the 2000s.1 After awarding production contracts to Makeyev Design Bureau and NPOMash in early 2011, Russia concluded research and development of the Sarmat ICBM on July 21, 2011. Russia completed its first prototype of the missile in late 2015.  In December 2017, Russia conducted its first silo ejection test of the Sarmat, which reportedly revealed technical deficiencies with the launch system. Two subsequent silo ejection tests—on March and May 2018—were apparently successful. The RS-28 was initially scheduled to enter service in 2018 with 50 missiles on order.

Intercontinental ballistic missile production cannot be done in a single factory. Many medium-sized state-owned enterprises are involved in the production of missiles. For example, the engine of the “Sarmat” comes from Moscow’s leading Russian rocket engine manufacturer-the Power Machinery Research and Production Consortium (NPO Energomash), which also produces the Proton-5 rocket engine. The parent company that produces the “Sarmat” intercontinental ballistic missile is the Krasnoyarsk Machinery Plant, which is part of the Makiyev National Missile Center Holding Company.

It is still unknown where the test firing of the new missiles came from. It can only be assumed that their “landing” location is at the Kula test site in Kamchatka, which is traditionally the range that heavy missiles must reach. However, according to the Russian Ministry of Defense, future flight tests of the Makiev National Missile Center will be carried out using the new test site in the North Yeniseisky region of the Krasnoyarsk region. Monitoring and measurement activities will be carried out there, and the launch itself will be carried out from the Plesetsk launch site and the current Vovoda intercontinental ballistic missile base.

From public sources, we can obtain information that the “Sarmat”, which is going to serve in 2022, will replace the combat duty of the 62nd Uzbek missile division of Vovoda, which includes Krasnoyarsk Territory and Dom. The area of ​​the Brovsky Front, which includes the 13th Missile Division (near Orenburg). Sergei Shoygu said during a recent visit to the Krasnoyarsk Machinery Plant: “The flight test will begin this year and is expected to be completed in 2022. In 2022, Russia will have the first “Sarmat” regiment is in service.

0 Comments on “World’s most powerful and heaviest intercontinental missile”