The world’s first dual-band early warning aircraft aerial equipment weighs about 20 tonnes, and strategic bombers can be found over 900 kilometres away!

For the first time, the Russian military’s a-100 awacs aircraft went to the skies. According to a well-informed source, the news was reported by a Russian news agency.

The project has been in the works for quite some time. The prototype was put through preliminary tests in February 2019. The a-100ll flying laboratory had already taken off for flight tests on multiple occasions.

This time, Russia performed a fantastic job! Such a revolutionary aircraft was built from the ground up during such a tough time! The a-100 will provide dependable defence for Russia’s skies!

The AWACS was absent for the last two years without any trace, but recently they spot testing radar. Just as Russian President Vladimir Putin and Russian Foreign Minister Sergei Lavrov were speaking with colleagues in Europe’s main nations. The fact that Russia has announced this is significant. It was no coincidence, according to military analyst Alexander Artamonov, this is perfect time and important demonstration of russia’s power over the west.

According to experts, following Russia’s demonstration of hypersonic weapons, the tone of conversations among western lawmakers has been more moderate as well. If the a-100 awacs test flight will be a success then it will be a clear message that Russia is very strong and the US military and NATO should keep away

Earlier, chief designer Vladimir Verba said flight tests of the a-100 awacs are scheduled to be completed now, in 2022. The A-100 will replace the A-50 and A-50a AWACS aircraft. Their first prototype took off in 1978 three years after a similar American aircraft took off.

The russian military reported that theA-100 AWACS could detect and track up to 300 targets at a range of 650 kilometers and control combat and reconnaissance drones. The A-100 is also an air command post. Crucially, it detects not only all types of drones, but also fourth- and fifth-generation fighters. The information on the computer of this flying “Super brain” comes not only from its radar and ground, but also from low orbit earth satellites.

The A-100 AWACS aircraft has a large onboard equipment, with radar and electronic equipment approaching 20 tons. On the su-57 fighter, the weight of avionics does not exceed 500 kg. It can be seen how advanced this a-100 early warning aircraft is.

The A-50 Beriev corresponding to the American Boeing E-3 Sentry took off in 1975. It has not been in official production since 1992, but is still in service. Comparing some parameters of certain operating modes of the two aircraft, the a-100 AWACS aircraft is significantly more advanced. 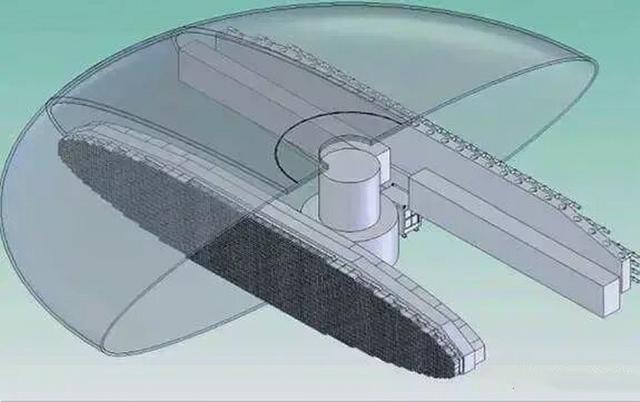 The A-100 AWACS is the world’s first dual-band two-sided array design, which can effectively detect stealth aircraft and low-altitude raid targets. In general, the russianA-100 early warning aircraft not only has good detection capabilities but also takes into account the anti-stealth capability, which is an advanced position among similar early warning aircraft in the world.

Overall, the Russian A-50’s performance is many times lower than that of the US E-3, which is particularly affected when scanning in medium to high altitude mode. But the E-3 has another trump card: bigger and farther.

How much stronger is an AWACS than a ground-based radar?

An ordinary ground-based radar station can only see a low-altitude target at an altitude of nearly 30 meters at a distance of 21 kilometers. But AWACS can detect it earlier.

The AWACS was baptized in combat in 1981, when the Israeli air force bombed the osilak nuclear reactor in Iraq with the support of an AWACS aircraft. The Israeli air force AWACS aircrafts were commanded over a range of more than 800 kilometers, and the fighters traveled through Jordan, Syria and Iraq, and Iraq’s air defense systems were in combat due to the war with Iran at the time. Finally, the Lebanese war of 1982 finally established the concept of the use of AWACS by states.