Will the Korean aircraft carrier dream come true? Look at his development

The development of aircraft carriers of the South Korean Navy

As we all know, South Korea is very like and people to fight the country, but because of its national strength, so often always have more than enough power. And with the aircraft carriers of its neighbors in recent years, one after another has been put into service and built, it has also made it eager to try. However, South Korea to build a large aircraft carrier is impossible, after all, many technical difficulties can not be broken, the most important thing is that the Navy’s funding is not so much, so can only make a choice, design a type of technical difficulty is not high light aircraft carrier to solve the problem, is the best choice.

In fact, the design of a light aircraft carrier is not very difficult, but its ship-borne aircraft has been unable to cross the threshold, but also South Korea is an ally of the United States, the U.S. Navy amphibious assault ship using the F-35B vertical / short-range take-off and landing stealth fighter has been put into production for many years, and in its “Wasp” class amphibious attack ship for many years of use, and very successful. As a result, a type of “American”-class amphibious assault ship has been developed, which has eliminated the docking module and is specifically equipped with F-35B vertical/short-range take-off and landing stealth fighter aircraft, providing a certain amount of air control for its amphibious landing operations. 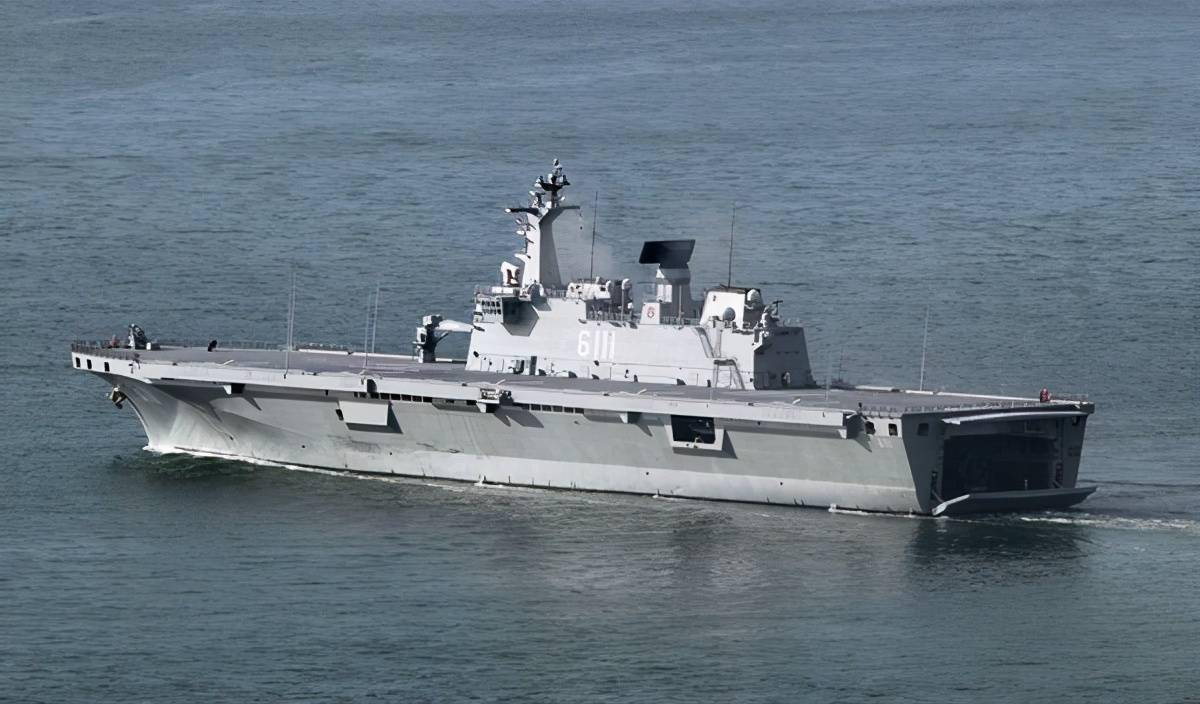 The South Korean navy’s aircraft carrier dream was driven by the Dokdo-class amphibious assault ship, the south Korean navy’s first carrier. But its shortcomings are also obvious, mainly the length is short, its largest ship is 199 meters, such a length is less than the Chinese navy’s 071 integrated landing ship 210 meters, so its full displacement is only 19,000 tons, still less than the Chinese navy’s 071 integrated landing ship 25,000 tons. But the biggest weakness is that its cockpit and docking station are at the same height, so its docking cabin occupies the length of the cockpit, making its fleet capacity greatly reduced, so want to carry a larger F-35B vertical/short-range take-off and landing fighter, I am afraid the carrying capacity is not much, so led to the “Dokdo” class amphibious attack ship built one.

The Maro Island-class amphibious assault ship is an improved version of the Dokdo class, mainly to upgrade the ship’s electronic system, using four-sided Israeli-made EL/M-2248 MF-STAR phased array radar, used for air-to-air alert and ship-to-air missile guidance, and the position of the weapon system has been adjusted to optimize the shooting range. However, its main scale is still the same as the Dokdo-class amphibious assault ship is 199 meters, the width is only increased by 1 meter. The design weaknesses exposed by the Dokdo level are still inherited. The same dock segment and the cockpit segment are at the same height, so the capacity of its cockpit has not been improved, so the shortcomings and “Dokdo” class is exactly the same, it can be said that “Maro Island” class amphibious assault ship is “Dokdo” class block II.

It can be said that the South Korean Navy’s aircraft carrier dream starting point is a little weak, which is in line with its national strength. Now South Korea has proposed the construction of a light aircraft carrier, which has been modified from the start on top of its Dokdo class, with a ski-jumped deck to shorten the flight distance of the aircraft. But with the advent of the Italian navy’s “Riester”-class amphibious assault ship, the South Korean navy has suddenly opened its first light aircraft carrier (LPX-II) to draw on the Italian navy’s amphibious assault ship.