A popular Russian state TV anchor has warned that Moscow could wipe Britain off the map with a nuclear tsunami in retaliation for supporting Ukraine.

In his Sunday evening primetime show on Channel One, one of the most-watched in Russia, Dmitry Kiselyov claimed on May 1 that a strike by the country’s Poseidon nuclear underwater drone could drown the UK under a 500-metre tidal wave of radioactive seawater.

Russia’s “doomsday torpedo” Poseidon  is an autonomous, nuclear-powered, and nuclear-armed unmanned underwater vehicle. It is a strategic weapon with a completely new way of attack and makes the enemy unable to take measures and deal effectively.

Russia can turn an enemy nation into a ‘radiochemical wasteland’ with this terrifying new generation of weapons,” British analyst Jacob Paul wrote in the Daily Express.

In the last few years, Russia has been developing the Poseidon unmanned submarine, which poses a serious threat to Western countries.

Jacob Paul drew attention to the fact that Russian television recently talked about the consequences of using an underwater drone and that the conclusions presented there do not bode well for Great Britain. This is reported by the Daily Express.

“Drone Poseidon is capable of creating a giant 500-meter wave of radioactivity that could hit Britain,” said Jacob Paul.

A few days ago, TV presenter Dmitry Kiselev spoke on Russian television about the consequences of using Poseidon.

He noted that if the device is used near the British coast, then the United Kingdom could be covered by a huge radioactive wave, which will then turn the country into devastation.

The author of the Daily Express stated that, although the exact characteristics of the new Russian weapon are not yet known, it seems that it will really be able to carry a powerful nuclear warhead.

Poseidon is an underwater drone that, thanks to its nuclear power plant, will be able to reach speeds of more than 100 km per hour under water and thus cover long distances.

Although its speed is less than the speed of ballistic intercontinental missiles, it will in any case be enough to escape from any of the torpedoes that exist today.

The drone’s warhead should consist of a nuclear warhead, the action of which could cause a tsunami that sends giant waves to the enemy’s shore.

Poseidon is also equipped with a nuclear reactor, which gives the weapon almost unlimited range.

One of the carriers of the new weapons of the Russian Federation will be the strictly secret submarine of the Russian Navy “Belgorod”. A huge submarine will be able to load up to six of these unmanned vehicles.

The Poseidon underwater drone – also known as Status-6 and in the United States as “Kanyon” – is basically a very large, nuclear-powered autonomous torpedo armed with a nuclear warhead.

What we know of it mostly stems from a 2015 leak on Russian TV of a government project for an underwater nuclear drone.

According to its mission statement, the project was focused on “damaging the important components of the adversary’s economy in a coastal area and inflicting unacceptable damage to a country’s territory by creating areas of wide radioactive contamination that would be unsuitable for military, economic, or other activity for long periods of time”. 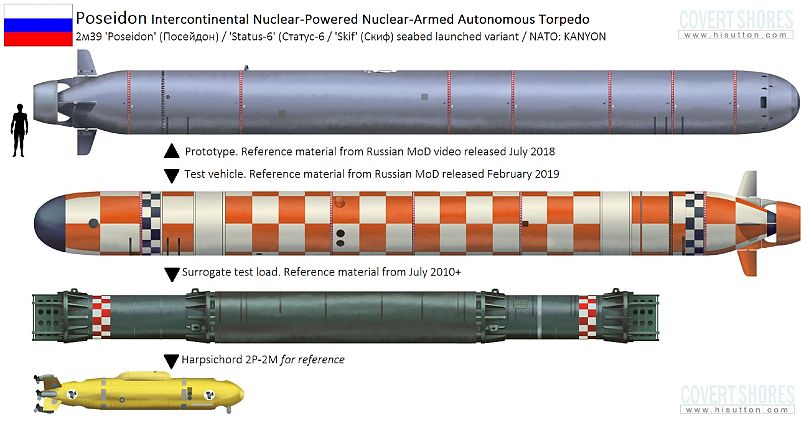 The torpedo, which Russia named Poseidon, is about 20 m long, can go 1,000 m deep and has a range of at least 10,000 km. It uses liquid metal reactor with at least 15 MW propulsion, it can travel at the speed of 185 km/h which would make it twice as fast as a conventional submarine, and that much harder to detect. For guidance, Poseidon uses artificial intelligence and satellite control.

Much of its actual capabilities remain shrouded in mystery, but its key strengths are thought to be its ability to operate very deep and very fast underwater, making it hard to intercept.

“It’s a torpedo which has an extremely long-range, can travel at high speed, and then packs that nuclear punch,” said David Hambling.

Poseidon is 1.6-2 m in diameter, 24 metres long, and weighs tens of tons, so it can easily carry a very big warhead.

“Despite Russian State TV threats of destroying UK (and Ireland?) with a Poseidon nuclear torpedo, the only Poseidon submarine is actually in dry dock. Image from a few days ago but confident Belgorod is still unavailable. The submarine hasn’t been commissioned yet” said by HI Sutton.

Norway sent its entire stockpile of Mistral 2 MANPADS to Ukraine