The tenders page of any organisation is rarely the place from where you expect breaking news. So it is no surprise that a request for information (RFI) of the Indian Navy issued on October 28 did not make headlines.

But this was no ordinary RFI: The Indian Navy was seeking a system that could potentially revolutionise the performance of its conventional (non-nuclear) submarines. The Indian Navy’s RFI document envisages the development of a ‘high-capacity’ lithium-ion battery system. The Indian Navy wants the system to be capable of being refitted to in-service submarines that use lead-acid batteries.

The Indian Navy has specified a 20-month deadline for the lithium-ion battery project from the date a contract is awarded.

Why this is a big deal

But the lead-acid batteries typically provide power for short periods (of up to 2 days) and the submarine is required to surface periodically to use air to run its diesel engines. This makes the submarine vulnerable to detection and attack.

From the time of the Second World War, engineers have looked at ways to supplement the submarine’s diesel-electric propulsion and reduce its reliance on atmospheric air. Hence, numerous nations have developed forms of ‘air-independent propulsion’ (AIP) to boost underwater endurance of submarines. Types of air-independent propulsion include technologies such as closed-cycle diesel engines that use liquid oxygen and fuel cells, which would function alongside the diesel engines and batteries.

The DRDO is working to develop a fuel cell system for the Indian Navy that uses phosphoric acid as an electrolyte that reacts with hydrogen (generated from sodium borohydride) and liquid oxygen to generate electricity. The DRDO fuel cell aims to give endurance of up to 14 days to a conventional submarine.

While an AIP system improves a submarine’s underwater endurance to 10 days or more, it adds to the complexity of submarine’s construction and increases its weight. 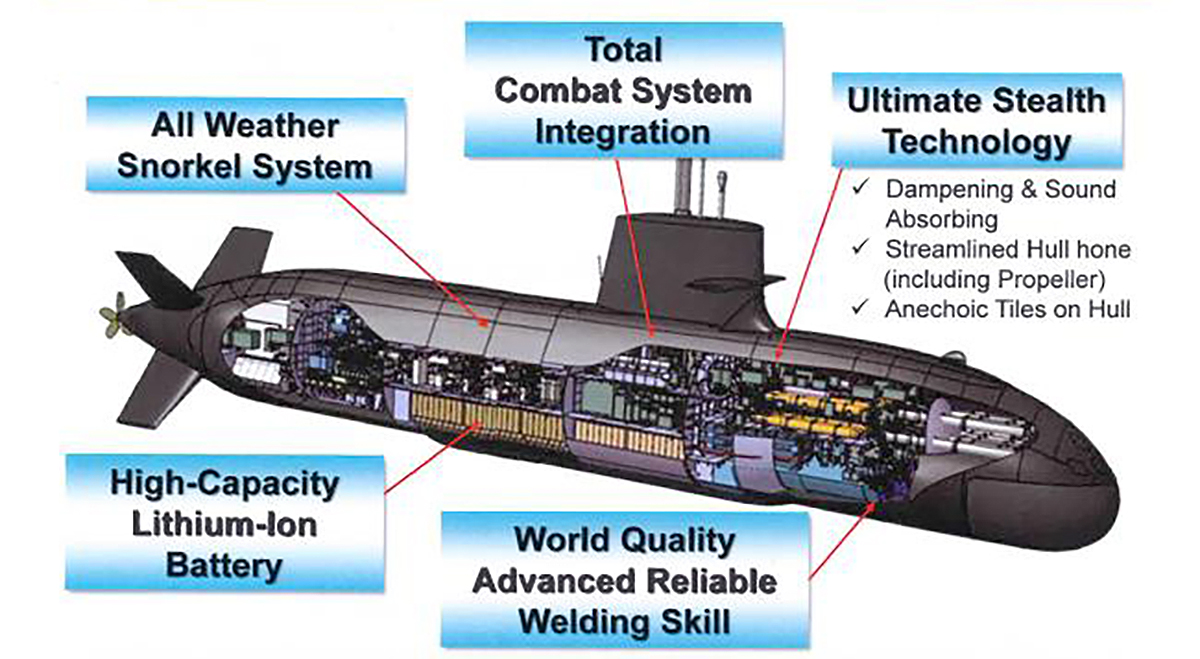 US defence website The Drive explained the advantages of lithium-ion batteries in an article in 2017. Lithium-ion batteries “keep up their output even when their charge runs low, they are lighter than lead-acid batteries, they can be charged exceptionally fast… and they can store much more energy. Compared to the AIP system they aim to replace, endurance should be similar, while the overall boat’s propulsion system design will be less complex and bulky. Not just that, but lithium-ion batteries can provide large output on demand, allowing the boat to dash mush faster while dived…” The Drive reported.

In short, a submarine with lithium-ion batteries has greater underwater endurance and can run faster than a comparable ship that has lead-acid batteries.

Is anyone using lithium-ion batteries on submarines?

Chinese companies have also been working to develop lithium-ion batteries for submarines, though the extent of Beijing’s progress in the field remains unclear.

Lithium-ion batteries pose the risk of releasing toxic gases and excessive heat in the event of an explosion, implying a greater risk of damage in the event of a fire. Moreover, cost of lithium-ion batteries remains high: Japan’s Ouryu submarine had an acquisition cost of $608 million, while its predecessor—which was equipped with lead-acid batteries—had a cost of $488 million, according to Defense News.