With its unique design and very good load capacity, the CH-47 helicopter has become a “symbol of retreat”, having participated in many US Embassy evacuations in history.

Before the Taliban’s stormy advance into the capital of Kabul, the international media once again hailed the CH-47 Chinook helicopter , and called it the savior of every embassy evacuation, in history of modern America. 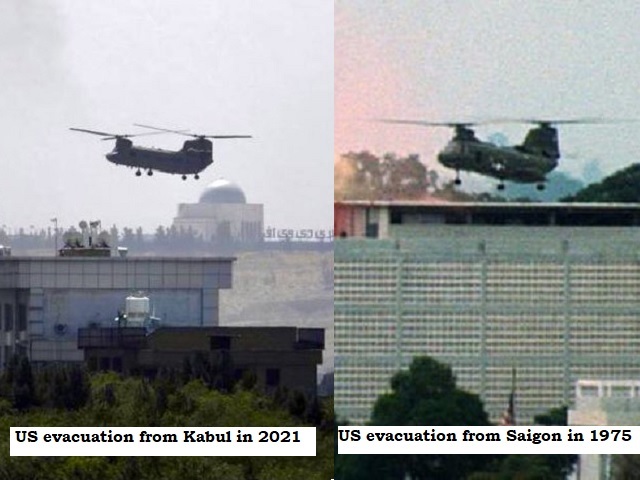 With its excellent maneuverability, the CH-47 helicopter can weave into many extremely complex areas, carry out loading people from the roof or from the top of a hill or mountain, helping the evacuation process to be carried out. act faster.

Having a unique design, this is the most famous transport helicopter in the world, and even other great powers such as Russia and China, cannot build and put into use the same helicopter with bulk.

Born since the Vietnam War, the CH-47 helicopter was then one of the “characters” playing a key role, in the helicopter strategy of this force.

In theory, the CH-47 heavy-lift transport helicopter only needs a crew of two, including a pilot and a co-pilot. In the transport mission, this helicopter needs an additional engineer specializing in cargo handling.

However, depending on the actual situation, the CH-47 helicopter can fly well with only one pilot. In addition, in real combat missions in hostile areas, this helicopter can have three other positions on the sides and rear of the aircraft, both as a pilot and as a machine gunner.

Using the design of two parallel propeller shafts, the Chinook CH-47 helicopter has excellent maneuverability, especially in the “loading” phase to drop troops or unload cargo from the tail door of the helicopter.

This capability allows the CH-47 helicopter to perform transport missions in a variety of areas with complex terrain, both in nature and in urban environments. In addition, a ceiling of up to 6100 meters also helps CH-47 operate in many high mountain areas, where conventional helicopters cannot reach.

The capacity of the CH-47 helicopter is also very respectable, with a maximum of 55 soldiers and full weapons. In case of emergency evacuation, this helicopter can “stuff” up to 70 people.

It is the advantages of good maneuverability, the ability to carry people superior to all other American helicopters, and above all, the large cruise reserve and high ceiling, that have made the CH-47 a “preliminary ambassador”. dispersal” of all the evacuations that the United States has to conduct around the world.

0 Comments on “Why did the CH-47 helicopter become a “symbol of withdrawal”?”