The trouble at Depsang Plains, a 972-sq-km stretch strategically and geographically important for India, predates the current LAC crisis.

Amid the ongoing tensions at the Line of Actual Control (LAC), a 972 square kilometre area at over 16,400 feet — the Depsang Plains — continues to be a source of major friction, with India ramping up its defence and the Chinese increasing their presence in the area.
The Depsang Plains come under India’s Sub Sector North (SSN) and as elsewhere, the LAC here is disputed. The SSN is sandwiched between the Siachen Glacier on one side and Chinese-controlled Aksai Chin on the other.
The disputed area, a feast for tanks because of its plain terrain, has seen two major standoffs between Indian and Chinese forces in 2013 and 2015. This is aside from the dozens of annual clashes that both sides engage in when soldiers come face-to-face while patrolling.
The importance of the Depsang Plains lies in its geographical location. The strategic and military threat to the plains is the greatest along the eastern Ladakh, which is also part of the SSN. But more than being a strategic offensive area, the Depsang Plains are actually more of a defensive feature in nature. 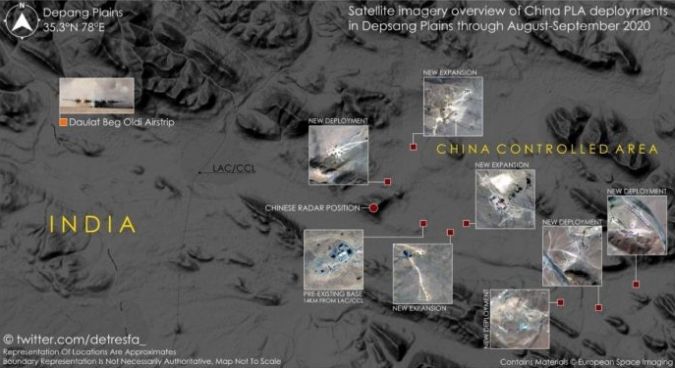 On 8 August that the tensions at Depsang Plains precede the current stand-off by at least several months.
The Chinese have been blocking Indian patrols, which go by foot beyond the feature called the Bottleneck area or Y Junction.
“The Depsang issue is different from the current standoff that is taking place between India and China,” a source said. “The Chinese have been blocking India’s patrol from bottleneck areas to PP11, PP12, PP12 A and PP 13. This has been happening from before the current tensions at LAC.”
The Chinese claim line here is about 1.5 km from an Indian military camp in an area known as Burtse. Indian forces also block the Chinese patrols from coming beyond the bottleneck area.
In 2015, however, the Chinese had intruded right until their claim line but eventually retreated.
While the Indian Army can still push ahead with force to reach its traditional patrolling points, it has avoided it so as not to create any new front.
The Indians can reach the Bottleneck by road but further travel is only possible by foot through two different routes. The north route, following the Raki Nala, goes towards PP10 and the southeast route goes towards PP13 along what is known as Jiwan Nala.
Even though Army officials maintain that “no ground has been lost in Depsang Plains this year”, it continues to be a matter of serious concern.

To the north of Depsang is the over 18,000 feet Karakoram Pass. To its right is the Chinese-annexed Aksai Chin, across which runs the G219 highway that connects Tibet and Xinjiang provinces. The Lingzi Thang mountain range divides the Depsang Plains from Aksai Chin.
China has, since 1962, a hold on the mountain spurs on the eastern edge of Depsang.
The western edge of Depsang abuts the southeast part of the Rimo glacier, which is an extension of the Siachen glacier. The official history of the 1962 war recognises the Chip Chap river valley, which opens into the Depsang Plains, as one offensive route from Aksai Chin into Ladakh.
Sources said Murgo, located on the southern edge of Depsang, now has a route to Sasoma in eastern Ladakh but is a combination of a jeep track and a foot trail. This path goes across the Saser La pass at about 17,000 ft. From Sasoma, there is a road into Gilgit Baltistan through Turtuk and Tyakashi (both on the Indian side).
“If this (Saser La) pass is captured by the enemy, then they can threaten the route to Siachen,” a source said.
He added that any threat to Depsang can mean the Darbuk-Shyok-Daulat Beg Oldie (DS-DBO) road can be threatened. The 255-km long road connects Leh to the Karakoram Pass. While the DBO, which has the world’s highest air strip, comes within the Depsang Plains, the military considers it separate.
“If the enemy cuts off the DBO, it makes India’s control over Karakoram pass untenable,” he said.
According to former Northern Army commander Lt Gen D.S. Hooda (Retd), India has built up good defence in the area.
“The SSN, including the Depsang area, is strategically important. The DS-DBO road runs through this area that is near the Karakoram pass. India has built up good defences in this area,” Hooda said.
Military historian Air Vice Marshal Arjun Subramaniam (Retd) noted that the control of the Siachen glacier for India is critical considering that to the east of the glacier lies the SSN.
“This is the area that saw much action in the 1962 India-China War and includes the Indian Advanced Landing Ground (ALG) of Daulat Beg Oldie, and contested areas of the Depsang Plains that have seen numerous face-offs in the recent past between Indian and Chinese border patrols,” Subramaniam wrote in April this year.
“Strategically, should Pakistan have taken control of the Siachen Glacier, SSN would have been sandwiched between Pakistani and Chinese forces, a fact that was well appreciated by the Indian Army leadership,” he added.
The official history of the 1962 War also identifies Depsang Plains and the DBO as possible launchpads against the Aksai Chin highway.

Sometime in 2015-16, India carried out a full-fledged war game taking into account possible multiple Chinese thrust into the SSN, with a focus on the Depsang Plains.
India has created a separate brigade to look after SSN following 2013 tensions.
Sources said this brigade is the most diverse of the Indian Army with multiple war elements being a part of it. To bolster its defences, India has been deploying armoured columns into the SSN region, with a key focus on the Depsang Plains.
The first of the deployments came 20 years ago when India began inducting BMPs or armoured personnel carriers (APCs) into the SSN. Around 2015, it started inducting T 72 tanks into the region — for the first time since the 1962 war.
During the war, six AMX-13 tanks were airlifted to Chushul in south-eastern Ladakh.
Even in the ongoing standoff with China, some tanks were airlifted using C 17 aircraft.
The big advantage now is that India has the DS-DBO road, which has also helped in the induction of more tanks, including the T-90, over the past few years. Giving an idea of how the tanks made it that far into eastern Ladakh, Lt Gen Hooda said the tanks came on trailers via the Zoji La pass through the Srinagar-Leh Highway.
From Leh, the DS-DBO road provides the connectivity for further deployment of the tanks into SSN.
“The road always existed. It is just that the alignment was not great but the tanks could move,” Hooda said. “The problem was during the summers when the Shyok used to get flooded. There was no problem during winters because the river would freeze.”
India initially began with three regiments of 46 tanks each positioned at vantage points at the SSN. This number has been bolstered to a “very comfortable level” to counter any kind of aggression by the Chinese, a source in the defence establishment said.

The DS-DBO Road That Irks The Chinese

The Chinese aggression at the Galwan Valley and the Depsang Plains is an attempt to put pressure on the DS-DBO road and stop further infrastructure build-up. Sources said the now all-weather DS-DBO road with 37 prefabricated military truss bridges is a game changer for the Indian military.
The construction of the DS-DBO began in 2000 and was to be completed by 2012 at a cost of Rs 320 crore. However, the project monitored by the Prime Minister’s Office passes through the difficult Shyok river bed, a portion of which used to wash off every year due to flooding.
A realignment process was hence initiated. According to available information, the UPA government formally signed off on the border infrastructure boost in 2006 with its ‘China Study Group’. It had set up a target to complete 61 India-China Border Roads (ICBRs) across the various Indian states facing the LAC by 2012.
The Border Roads Organisation (BRO), however, failed to deliver.
A CAG report tabled in Parliament in 2017 observed that only 15 of the planned 61 roads had been completed.
“Out of 61 Indo China Border Roads (ICBRs) planned to be completed by 2012, only 22 roads had been completed up to March 2016, despite incurring an expenditure of Rs 4536 crore (98 percent) against the estimated cost of Rs 4644 crore,” the report had noted.
The construction activity was ramped up after then defence minister Manohar Parrikar decided to step in and revamp the BRO. Subsequently, the BRO was brought under the ambit of the defence ministry in January 2015, from the Ministry of Road Transport and Highways.
After a complete overhaul, budget allocation was increased for the induction of modern equipment needed to cut through the massive rocky terrain. In the last five years, there has been a steep rise in construction setting off alarm bells in the Chinese establishment.
An article by Yun Sun, senior fellow and co-director of the East Asia Program at the Stimson Centre, said the Chinese saw Indian infrastructure activity “as a consistent and repeated effort by Delhi that needs to be corrected every few years”.
For the Chinese, she added, the infrastructure arms race in the border region has led to repeated Indian incursions and changes to the status quo.
“Otherwise, all the things China fought for in the 1962 war would have been in vain,” she said, citing the example of the 2013 action by the Chinese in the Depsang Plains.
R N Ravi, former special director of the Intelligence Bureau, had in 2013 said following China’s move to capture Aksai Chin in 1962, it took other strategic action. Four months later, it also got a crucial chunk of Jammu and Kashmir, west of the Karakoram Pass adjoining Xinjiang, under Pakistani occupation through an “illegal treaty” with Pakistan on 2 March, 1963. Ravi had called it a far-sighted strategic move on part of China to secure its unstable and tenuously held far-flung provinces.
Ravi, now Nagaland Governor, added that taking advantage of its ‘superior military capabilities along the border’, China has been making increasingly aggressive military pushes along Karakoram-Daulat Beg Oldie-Track Junction-Burtse axis in the Depsang Plains. It has been inching closer to Shyok river, seeking to substantially alter the “differing perceptions” of the LAC in its favour, forcing the Indian troops to yield and incrementally retreat.
“Loss of territory in this sub-sector grossly undermines India’s strategic future vis-a-vis China in this sector and increases vulnerabilities of its supply axis to the Siachen sector vis-a-vis Pakistan,” Ravi said.
In 2005, he added, while there were 150 transgressions at the LAC in this sector, the number had increased to about 240 by 2010.
The Chinese built a 20-km motorable road along Jiwan Nala in 2010 and 15-km motorable road along Raki Nala from JAK II to GR 626516 in 2011, “both on the Indian side in the Depsang Plain without a scintilla of resistance”, Ravi said.