The North Korean artillery unit conduct a live firing exercise to increase combat capability, as the US and South Korea held a large-scale drill.

The North Korean Central News Agency (KCNA) said that the exercise, which took place on November 6, 2021, aimed to test “This year’s drills were designed to inspect the mechanized units’ progress in their mobile combat capabilities and to further intensify competitive training throughout the North’s military”.

The exercise took place under the direction of General Pak Jong-chon, a member of the Standing Committee of the Politburo of the Workers’ Party of Korea. North Korean leader Kim Jong-un was absent from the drill.

“The artillery batteries fired continuously and destroyed the target with high accuracy right after the command to fire. The unit that won the first prize in the sports festival was awarded a certificate of merit ‘good gunner’ and a medal. General Pak Jong-chon was very satisfied with the results of the sports festival,” KCNA said.

South Korean media reported that North Korea used to not report on artillery drills if leader Kim Jong-un was not present.

The artillery festival was organized by North Korea after the US and South Korean militaries on November 1 began a five-day drill with the participation of 200 air force weapons. 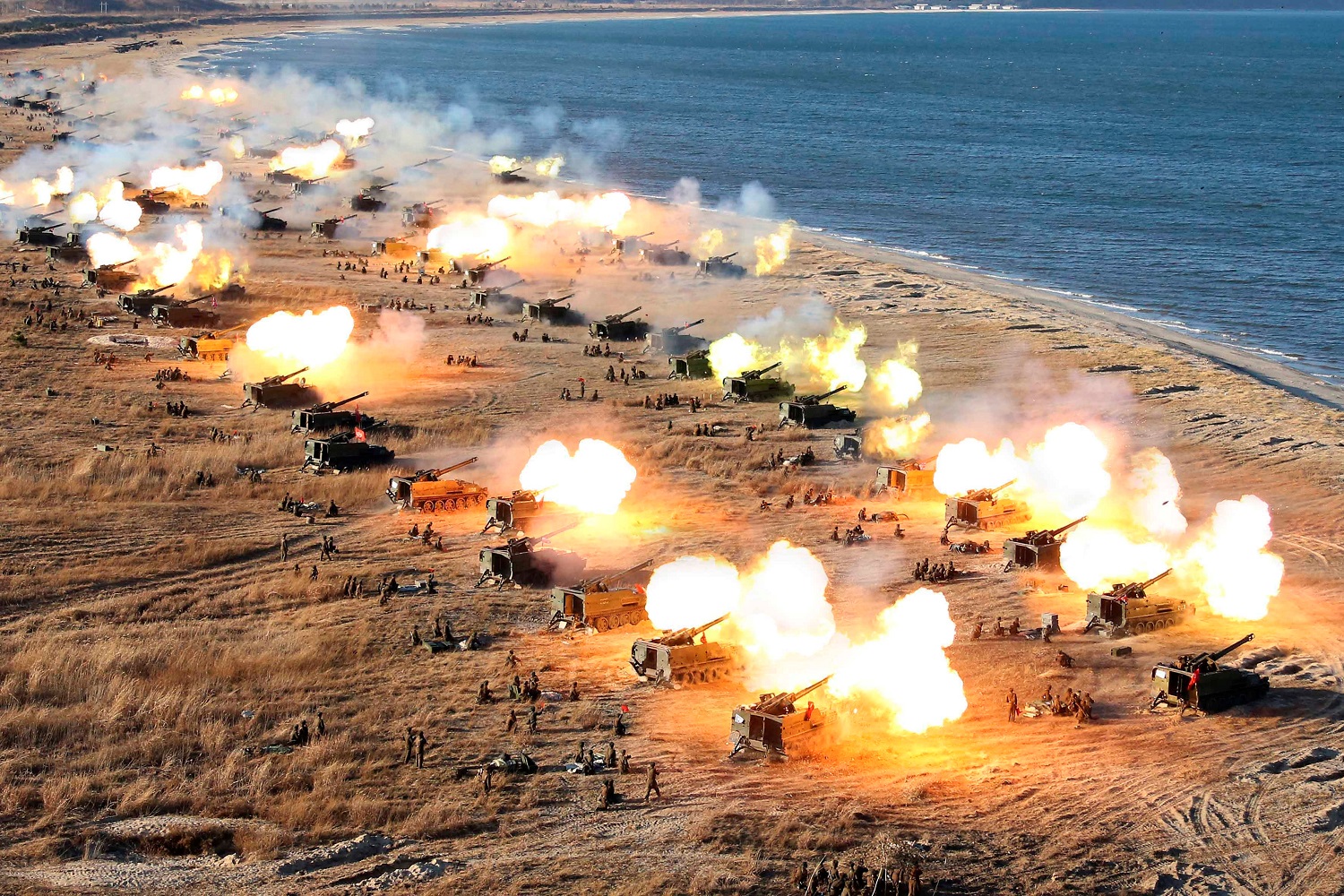 This exercise was not announced or named, although the US and South Korea used to call it Exercise Vigilant Ace.

North Korea has criticized the United States and South Korea for applying double standards when describing Pyongyang’s military training activities as provocative but maintaining the drills under the pretext of deterrence.

North Korea’s Tongil Sinbo newspaper last week condemned the US-South Korea military drills, saying it was a “preparation for war” and went against efforts to build peace in the region.

Not nuclear weapons or ballistic missiles but artillery are Pyongyang’s main weapon in the military balance on the Korean peninsula.

Due to special circumstances, North Korea still prioritized the development of artillery. It can be said that North Korea possesses the strongest artillery force in the world.

More frightening, they are focusing on developing long-range and super-long-range artillery, capable of reaching every corner of the Korean capital.

Only about 40 km from the demilitarized zone (DMZ), even the South Korean capital Seoul is an ideal target for shelling from North Korea.

Military experts Victor Cha and David Kang say that, with this powerful artillery, North Korea can fire 500,000 rounds into Seoul in just one hour.

In the context of limited economic potential, the development of tactical missiles together with ballistic missiles will create great pressure on the economy of this country.

The use of artillery that fires a large number of shells will save costs while ensuring more effectiveness than using tactical missiles that are both expensive and easy to intercept.

Recently, North Korea has repeatedly tested long-range artillery as an affirmation of its military might.

According to analysts, North Korea has placed about 8,000 artillery pieces and rocket artillery systems in the area bordering the south Korea.

North Korea possesses at least five artillery systems that can reach Seoul, South Korea’s capital, including the 170 mm Koksan cannon and the 240 mm and 300 mm multiple launch rocket launchers capable of hitting the northern suburbs and some parts of the country.

The Nautilus Institute for Security and Sustainability calculates that, if North Korea launched an artillery attack focused on South Korean military targets, 3,000 people would die within the first hours. If the attack was on any target, 30,000 people would be killed.

With such a high casualty rate, South Korea and the United States, despite many disagreements with Pyongyang, did not dare to go to the brink of war.

Although the defense system of Korea is very strong and modern, but with a rain of shells, all countermeasures are almost ineffective.

A special feature that makes it difficult to counter artillery as well as destroy the Korean artillery positions is that the cannons are hidden in the treacherous mountains. This is one of the factors that makes North Korea always have a strong position at the negotiating table with the US and South Korea.