Recently, videos posted on social media showed that another Ka-52 “Alligator” gunship was shot down again. After the outbreak of the Russian-Ukrainian war, four helicopters have been shot down one after another, but thanks to its good anti-fall design, the two helicopters were basically forced to land after being hit, and the crew had plenty of time to escape.

#Ukraine: Another Russian Attack Helicopter was destroyed by Ukrainian Air Defenses; this time a Ka-52 with tail number of RF-13411. pic.twitter.com/xeRhgB3mrv

But This time, this one was different. The whole scene was like being bombed. The fuselage was completely blown into parts. The raging fire burned the entire front fuselage. It wass impossible for the pilot to survive such an explosion. Moreover, its rotor was still connected to the fuselage, indicating that the pilot did not activate the ejection seat, because the ejection process of the Ka-52 is to blow up the rotor first, and then eject the pilot. These all show that the two pilots are likely to have died at the moment of the explosion. 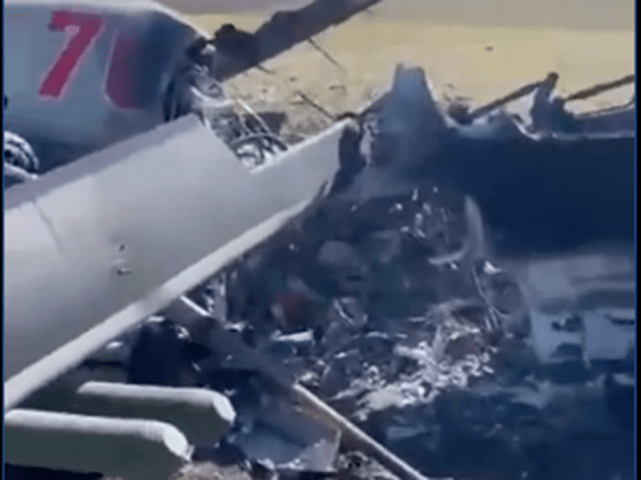 Ka-52 is the world’s first two-seat coaxial rotor gunship. It has powerful firepower and protection, and has good flight performance. However, in this Russian-Ukrainian war, it falling one after another, indicating that the design of the aircraft has certain defect characteristics.

The Ka-52 helicopter adopts a coaxial rotor design, that is, there are two sets of counter-rotating rotors on the top of the fuselage, and there is no tail rotor at the tail, which can effectively shorten the length of the helicopter and reduce the risk of being hit on the side. However, the design of the Ka-52 still has certain problems for armed helicopters!. Here are the details Ka-52 keep falling from sky.

The first is the side-by-side seats. The two pilots are located on both sides of the cockpit. In fact, for a single pilot, the field of vision is not good, and it is impossible to observe the situation on both sides through the peripheral vision of the eyes. This is also a defect of the Su-34 fighter-bomber. Interestingly, this new fighter-bomber was also shot down several times. According to info Russia lost 4 Su-34 till the date.

Second, the Ka-52 does not have a rotating main gun turret. It is equipped with a 30mm cannon on the right side of the fuselage. It can only fire forward and right. The flexibility is far less than that of the model with a rotating turret on the abdomen. Once a target is found, you have to adjust the entire helicopter to shoot while in Apache helicopter you just need to move your eyeball and it will fire on that direction.

Third, the complex mechanical problems brought about by the coaxial rotor have resulted in poor reliability of the helicopter. While Another Russian attack helicopter Mi-28 “Havoc” actively participate in war and no losses have been recorded so far, and only two of the older Mi-24 “Hind” gunships were shot down.

But According to Russia Ka-52 is the most modern and best attack helicopter in Russia’s inventory, so how can Ukrainian shoot down this modern machine so easily? It must be a powerful anti-aircraft missile that would destroy this helicopter, and it would be possible to blow up the solid helicopter body into parts.

The third possibility is the “Buk” surface-to-air missile. This missile system also uses a tracked chassis for maneuvering. If the huge warhead hits directly, it may shred the Ka-52.