It is not easy for Korea to achieve what it is today. There is not a long history of aviation manufacturing, and the accumulation of experience is relatively weak, but it has created a rather difficult miracle in a short period of time. This project can be traced back to 2001. At that time, the South Korean president proposed that South Korea’s own advanced warfare organization was thought to be possible.

At that time, no one thought it was possible, but South Korea did not joking. In 2015, it signed a research and development contract. Now this concept has been changed. It became a real thing, even if it didn’t fly for the first time, it can still be something that Koreans can be proud of.

At present, the KF-21 is only a prototype. It cannot be said to be the complete state of this fighter. There must be many improvements and improvements, but many details can still be displayed. South Korea has positioned the KF-21 as a 4 ++ or 4.5-generation fighter, but the overall design is completely based on the fifth-generation fighter’s standard, just to reduce some requirements due to technical risks.

For example, the built-in magazine is cancelled and 10 are replaced. Weapons hold a point, but in the future development, it can become a real five-generation machine, and its potential cannot be underestimated.

South Korea will be the fourth country after the US, China, and Russia to build a fifth-generation stealth fighter, the KF-21. So what does the KF-21 mean for South Korea’s ambitions as a major arms exporter?

After the success of the F/A-50 fourth-generation light fighter program, which was widely exported and proved highly effective in combat in Iraq and the Philippines, Korea Aerospace Corporation (KAI) sought to develop a fifth-generation fighter, the KF-21.

The KF-21 stealth fighter program shows the great ambition of Korea when the country is relatively inexperienced in the field of military aviation; Especially at present, only three countries in the world, the US, China, and Russia, can produce their own 5th generation fighters.

The KF-21 is a 5th generation twin-engine jet fighter with low maintenance costs and an affordable price; will first be equipped in large numbers for the Republic of Korea Air Force. It will also be key to marketing to Southeast Asian customers, who have previously appreciated the F/A-50 light aircraft.

Korea’s air force is one of the largest in the world today, Korean fighters are mostly purchased from the US and are gradually reaching the end of their useful life. Therefore, the KF-21 fighter has the advantage that it will be mass-produced, first to replace the number of third-generation fighters such as F-4E or F-5E (about 235 units) in the Korean Air Force.

Such a large number would allow the scale of production of the KF-21 to exceed that of all other fifth-generation fighter programs in the world, second only to the F-35. USA and China’s J-20.

however, the cost and operating costs of the KF-21 are higher than the 3rd generation fighters, especially compared to the F-5E; this would mean that the number of squadrons would be reduced, or squadrons would be significantly smaller due to the gradual elimination of the F-5E, to accommodate the KF-21s.

South Korea received its first F-16 fighter jets in the 1980s and is currently operating 163 aircraft, along with 60 F-15Ks. Overall, the F-15K is still a modern heavy fighter, capable of both ground attack and air-to-air roles. Neither the F-35 nor the KF-21 can match its performance and durability.

The F-16 is a low-cost, light fighter, but is increasingly seen as about to become obsolete in the near future. Despite being regularly upgraded by South Korea, the F-16 has also reached the end of (or near the end) of its service life and must be removed from combat service; and so the only choice left for the South Korean air force to exchange these old fellas with new and advanced fighter aircraft like KF-21

In addition to equipping its Air Force, the KF-21 is expected to be sold on the export market; Southeast Asian countries are expected to be the first customers such as Thailand, the Philippines, Indonesia, and maybe even Iraq.

These countries are still operating the F/A-50, F-16 or F-5 today, which the KF-21 was designed to replace. Although it has less stealth than the F-35 and uses a weaker engine, the KF-21 has the advantage of lower operating and maintenance costs.

The KF-21 fighter will have a higher speed, ceiling than both the F-16 and F-35, and be able to use a wide range of modern weapons. The most notable of these is the German Taurus tunnel-breaking cruise missile, which is equipped with a Korean F-15K heavy fighter.

It is worth noting that the Taurus cruise missile has been copyrighted and domestically produced by Korea; In addition, the KF-21 can also be equipped with Meteor out-of-sight air-to-air missiles, which have a range of nearly double the AIM-120 AMRAAM missiles used by the F-35. 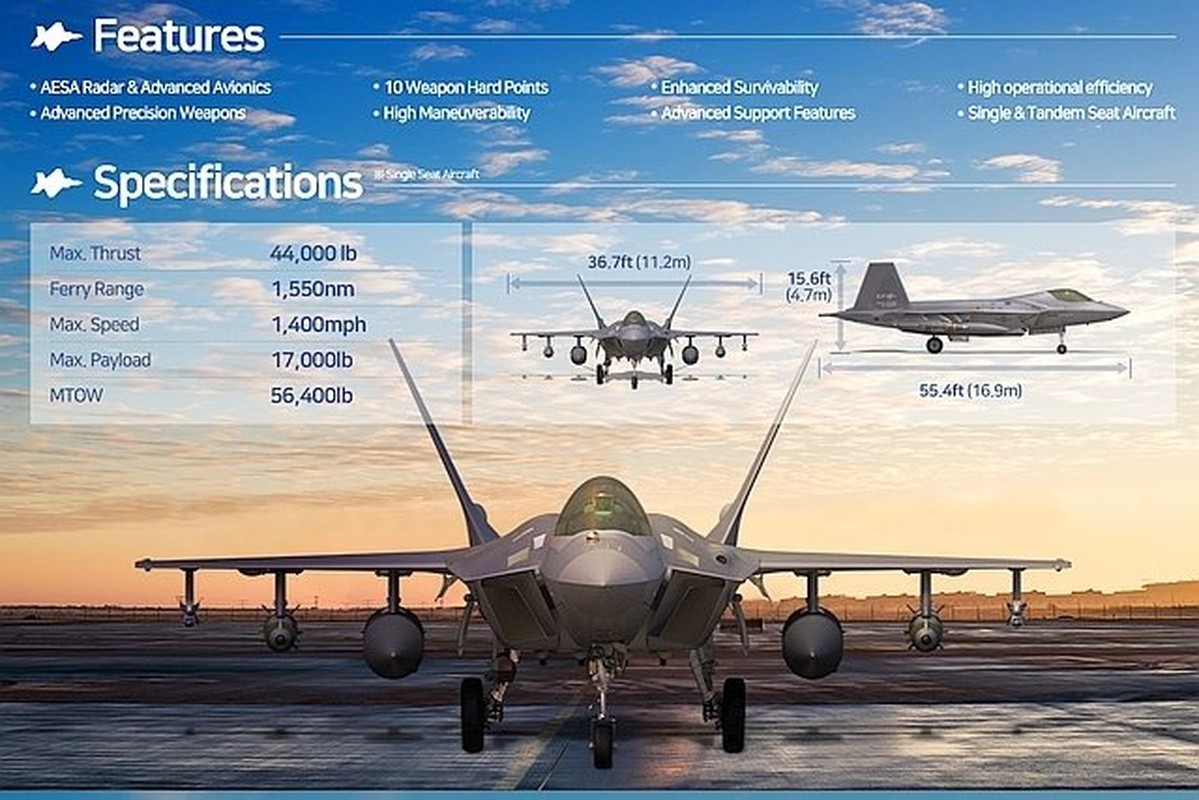 The KF-21 is also expected to be compatible with US missiles, meaning they can use the AIM-260 long-range air-to-air missile, which is expected to enter service near the end. this decade. The AIM-260 is faster, more versatile, longer range, more reliable and cheaper than the Meteor.

Building on the precedents of the Korean defense industry in terms of high-performance and cost-effective weapons systems such as the K9 Thunder howitzer, the K2 Black Panther battle tank, to the F/A-50 advanced trainer jet, Hyunmoo-3 cruise missile; The KF-21 is expected to be one of the most successful fifth-generation fighter programs in the world.

With Russia’s Su-57 program being limited by production numbers being too small and being strongly prevented from exporting by the US; Turkey’s TF-X program is too ambitious, relies heavily on foreign technology, and Turkey also has a limited technological background; this makes the KF-21 the leader among domestic fifth-generation programs, excluding the American and Chinese programs.