Airborne early warning and control system are the most effective means of controlling airspace, timely detection, escort, and identification of air and surface targets, targeting them with tactical aviation, collecting and transmitting information about the situation to ground air, and ship control points.

In 2000, the Shaanxi KJ-200 (Kong Jing-200) aircraft was launched in the People’s Republic of China. The export version has a number of names: Y-8 Balance Beam, Y-8W AEW’amp;C and zDK-06. The first flight of this aircraft took place at the end of 2001. The KJ-200 is equipped with a radar station with a target detection range of 300 to 450 km. New aircraft of this type are equipped with Pratt and Whitney turboprop engines with high-performance six-bladed JL-4 propellers, which allow to increase range and reduce noise.

The first serial KJ-200 flew on January 14, 2005, and the first crash involving it occurred in June of the following year. Testers and development engineers were killed, which complicated the continuation of the program of creation of Chinese complexes of DRLOIU. The Chinese took into account the errors and began to equip further aircraft with a de-icing system and equipment to alert the crew about emergencies on board. Additional vertical stabilizers on the tail plumage were also installed and the wing design was changed. Chinese specialists were able to complete the KJ-200 tests in a fairly short period of time, and aircraft of this type began to enter service with the Chinese People’s Liberation Army Air Force (PLA).

The KJ-2000 Kongzhong Jinglei aircraft, which can be translated as a “heavenly eye,” was created by specialists of the Xiang Aviation and Industrial Corporation of China on the basis of the Russian military transport aircraft Il-76MD. In 1997, after negotiations with Russia and Israel, a contract was signed for the joint development, construction and delivery of DRLOI aircraft systems to China.

Specialists of the Russian Taganrog Aviation Science and Technology Complex named Beriev had to modify the serial A-50 (Russian Air Force DRLOIU aircraft at Il-76 base) to install an Israeli-made radio-technical complex with the EL/M-205 IAI Phalcon radar. A total of four aircraft were supposed to be delivered to the PLA Air Force, but due to strong pressure from Washington, Israel was forced to suspend the contract first in the summer of 2000 and then notify China of its continued participation in the project.

After Israel’s withdrawal from the program, the leadership of the People’s Republic of China decided to continue its work independently, equipping the aircraft with a radio-technical complex with an active phased antenna grille (AFAR), communication and data transmission of its own development. As China did not have other suitable aircraft, the subsequent complexes of the DRLOIU were built on the basis of transport IL-76MD, which were delivered to China in the 1990s. In November 2003, the aircraft made its maiden flight, and at the end of 2007, four of the KJ-2000 serial aircraft, designated KJ-2000, were officially commissioned by the PLA Air Force.

The aircraft’s radio-technical complex is based on a multifunctional three-coordination pulse-doppler radar developed by specialists of the Chinese Nyanyanjin Electronic Technology Research Institute, part of the China Electronic Technology Corporation and also known as the 14th Research Institute. This radar provides a circular view, detection and support of air and surface targets, as well as guides tactical aircraft to ten of the accompanying targets in automatic mode or speech commands. For the individual protection of the aircraft on board installed: a system warning about the launch of missiles, machine guns of emission of dipole reflectors and infrared false targets.

The advent of the KJ-2000 aircraft has significantly improved the PLA Air Force’s ability to detect air targets, including low-flying and low-visibility aircraft. 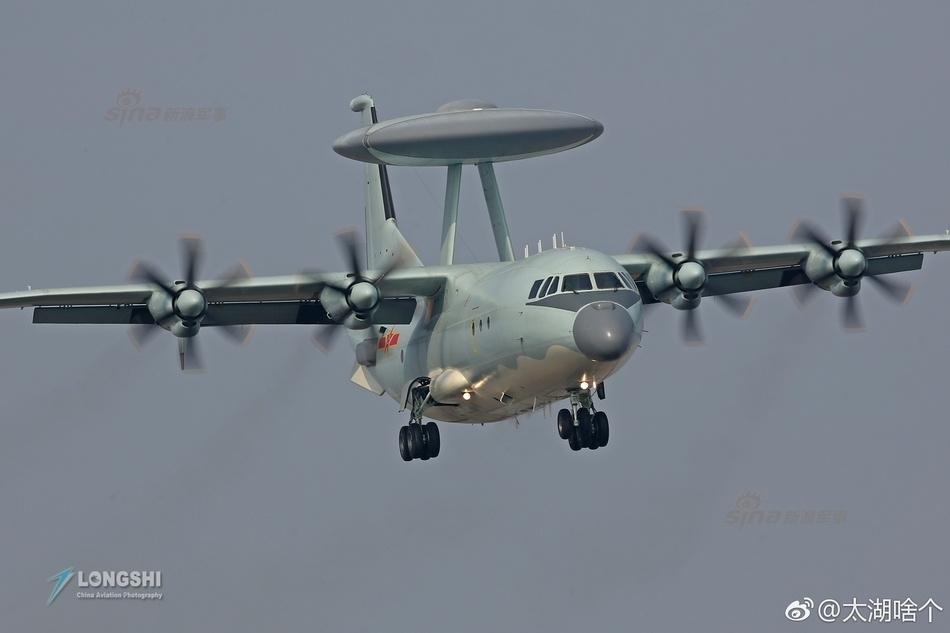 In early 2015, the next type of National Development DRLOI aircraft, the Shaanxi KJ-500 (Kong Jing – 500), was adopted in China. It is based on the Chinese multirole transporter Shaanxi Y-9, which is analogous to the Soviet An-12 and is designed to search, detect, identify and escort air and ground targets at a range of up to 500 km.

The first flight was carried out in 2013, and a year later the aircraft was presented at the international aerospace salon Airshow China – 2014 in Chuhai. Its antenna radar system is located above the fuselage under a disco-shaped fairing. The station has circular (360 degrees) and sectoral (120-240) airspace viewing modes. It detects cruise missiles at low altitudes and hovers up to ten aircraft. The personal protection system warns the crew about the launch of guided missiles, carries out their escort, threat assessment and automatic installation of active interference.

The aircraft is smaller than its predecessor KJ-2000 and according to experts exceeds it in the accuracy of detection and the number of simultaneously accompanied targets. As of December 2019, according to The Military Balance, china has 13 KJ-500 units in service with china.

The adoption of the new KJ-500 DRLOI aircraft has certainly increased the PLA’s capabilities. The sharing of all three types of aircraft significantly improves the effectiveness of control of coastal areas, mountainous areas and disputed areas.

Beijing continues to actively increase the grouping of its AEW&C aircraft in 2020. According to data from various open sources, the total number of these special boards has already exceeded 30 units. The Chinese are close to Russia in terms of the number of such aircraft.

All types of aircraft, with the exception of the KJ-2000, are multifunctional and provide control of the electronic environment and detection of sources of radiation. In the future, it is expected that the capabilities of the DRLOIU aircraft will be further developed by the deployment of optoelectronic reconnaissance equipment.

China has shown a strong intention to defend its territory from the air, and of course seeks to be able to control the air situation of neighboring states, especially those with which Beijing has strained relations. And it looks like he’s doing it.