During the Cold War, the US and the Soviet Union created many advanced weapons and they became rivals on the battlefields. Today we gonna talk about the “Flying Tank” of both nation

Russia’s Sukhoi Su-25 Frogfoot and America’s A-10 Warthog, both dubbed “flying tanks” in the sky, are rivals in the air support mission for ground combat units.

This is a symbol of two leading militaries in the world, both aircraft are equipped with advanced armor, low-altitude attack, and bombing capabilities, supporting infantry to attack enemy ground forces.

The American A-10 Thunderbolt II aircraft was born after the US military learned from the Vietnam battlefield. Starting in 1972, the US military recognized the need for specialized aircraft for ground attack purposes. At the time, the US Air Force had three options for ground attack missions : the F-4 Phantom, the F-111, and the A-1 Skyraider. But these planes are not suitable for the requirements set forth.

The A-10 Thunderbolt II was born to compensate for the hole in the US Air Force’s air-to-ground combat, completely overcoming the weaknesses of the F-4 and F-111 when participating in ground attacks.

Meanwhile, the Russians began production of the Su-25 in 1978. The birth of the Su-25 is almost identical to that of the A-10. The Soviet Air Force recognized the need for a low-altitude, high-survivability aircraft to add to its attack fleet.

Before the Su-25, the Su-17, Su-22, MiG-23BN and MiG-27 had only a single engine and no armor. The combat experience in Afghanistan shows that these planes are very easy to shoot down by the ground fire. So an aircraft with armor protection and 2 engines is needed to improve survivability.

In terms of design, the Su-25 is smaller and more compact than the A-10, with a take-off weight of 19.3 tons(Su-25) and 22.7 tons(A-10), respectively. Considered to have better cockpit protection, the Su-25 has a cockpit armor thickness of 10 to 25mm, while the A-10 cockpit is protected by titanium armor weighing more than 0.5 tons, nearly 4cm thick.

Both the Su-25 and A-10 are an arsenal of flying weapons, the terror of enemy ground forces. The main armament of the A-10 is the 30mm GAU-8 howitzer, with 1,174 rounds of ammunition. The cannon has a rate of fire of up to 4,000 rounds per minute. In particular, this cannon can fire uranium-poor armor-piercing ammunition, allowing it to destroy tanks and armor with high efficiency.

The A-10 also has 11 weapon hardpoints with a total tonnage of 7.2 tons, which is huge advantage over the Su-25. The A-10 can also carry conventional bombs, cluster bombs, AGM-65 Maverick air-to-ground missiles and AIM-9 Sidewinders mounted on LAU-105 launchers on the outermost pylons.

The reality of the battlefield has proven, A-10 and Su-25 both have their own strengths. They are the most powerful ground support aircraft in the world today. Although these two “flying tanks” are relatively similar, one can still see differences in the strengths of each when considering how the internal systems have been developed. 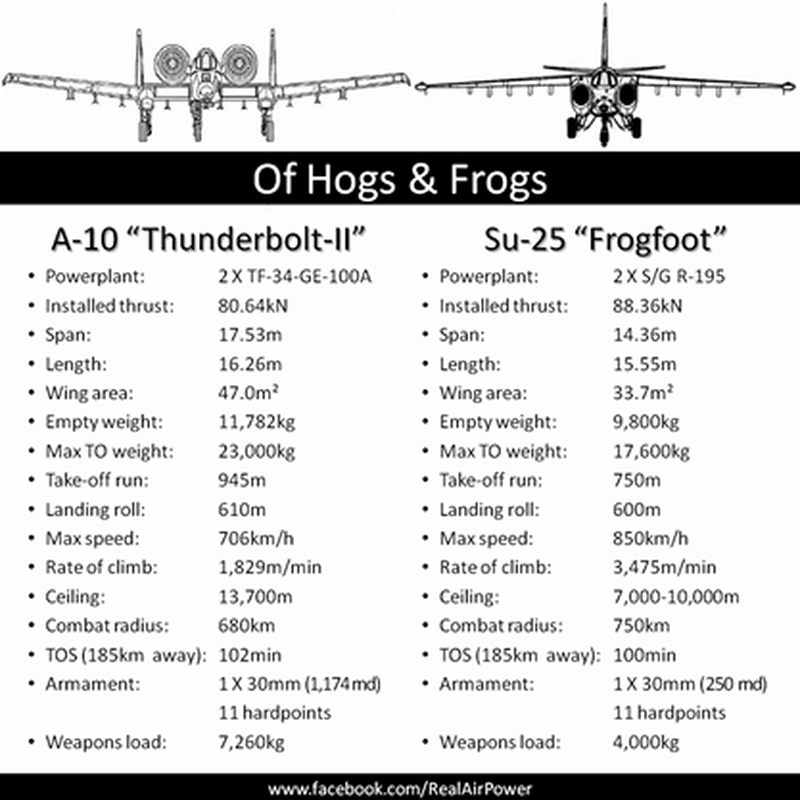 The Su-25 is one of the clearest demonstrations of the might of the Russian air force. Since its debut in the Afghanistan War in the 1980s, the Su-25 has been used in all the conflicts of the Soviet Union and Russia, from Chechnya to Georgia and Syria.

Similarly, since serving in the US military, the A-10 has always been deployed to the battlefields where the US participates. The A-10 Thunderbolt II is a nightmare for infantry and enemy tanks. The US is expected to retire the A-10 in 2022, while Russia continues to upgrade the Su-25 to continue performing the mission for many more years.