The Mi-28NM Night Hunter is one of the newest attack helicopters of the Russian Army, but a new video shows that it has suffered the first casualty on the Ukrainian battlefield.

The footage shows the moment a Russian Mi-28NM  helicopter took a direct hit by a MANPADS missile that blew off its tail causing it to crash to the ground. Reportedly, the event occurred in the Luhansk Oblast.

Interestingly, at the beginning of the clip you can also see the gunship helicopter use the ballistic rocket-launching tactic, perform an evasion maneuver to egress the area at low level and be hit in the exhaust area by the missile that caused the tail boom to separate from the rest of the aircraft.

for the First time, Russian Mi-28 attack helicopter was reportedly shot down by a British Starstreak missile. pic.twitter.com/L5jhqhhRdW

According to some reports, both pilot and gunner survived.

UK Ministry of Defence believed that the video showed Starstreak in action over Ukraine. The source added that the anti-aircraft system had been deployed in the country for almost a week. Senior defence industry sources who examined the film also believe it to be the weapon.

Starstreak, a high-velocity projectile that destroys targets with three kinetic darts, was filmed cutting the aircraft in two over the Luhansk region in the east of the country. Starstreak is the most advanced portable missile system in UK inventory.

“STARStreak’s highly unique design significantly differentiates it from other SHORAD missiles”, says Thales website. “Designed and developed from first principals to engage fast, evasive or heavily armoured pop-up targets, all in a short timeframe, the system is required to travel at exceptionally high speed. Simultaneously, it has to be small and light enough to be man portable on the battlefield where it may increasingly need to be deployed in urban environments.”

“The missile itself comprises three tungsten darts, released from a carrier which is powered by a rocket motor. The darts are accelerated to a speed in excess of Mach 3.0 and the fire control system’s laser beam riding guidance ensures exceptional accuracy whilst being almost totally resistant to countermeasures.

These unique characteristics and the exceptional speed of STARStreak pose a significant challenge to adversary pilots who are unlikely to have sufficient time to react once an engagement begins. This, in conjunction with the inability to jam the missile, has a huge impact on the human consciousness of pilots and a highly disruptive effect on mission planning and execution.”

The Mi-28NM, the latest upgrade of the Mi-28 (NATO code name “Havoc”), is equipped with advanced sensors that enable it to conduct night operations 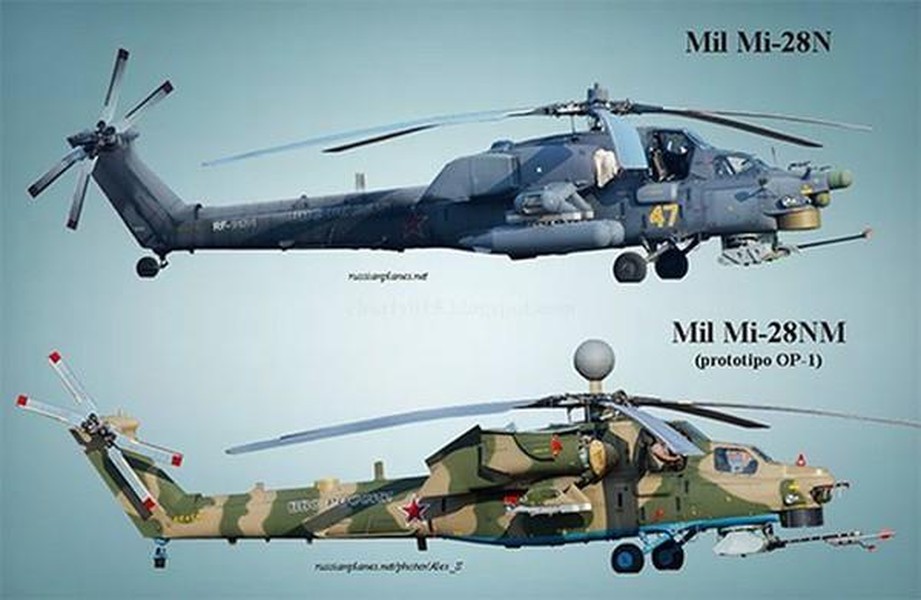 “The main novelty of the Mi-28NM is the N025E radar, which was previously installed only on export models,” Izvestia says. “The antenna receiving and transmitting part of the radar is located above the rotor of the helicopter. From the side it looks like a ball – it is a special fairing made of radio-permeable material. Such an arrangement of the radar gives a circular view, and also allows you to receive a radar image of the terrain, hiding in uneven terrain behind artificial and natural obstacles while remaining invisible to the enemy. On the battlefield, the radar station can effectively operate from ambush, the first to strike unexpected blows at the enemy.”

Significantly, given Russia’s recent willingness to deploy military force abroad, the Izvestia article emphasized that the Mi-28NM’s VK-2500P-01/PS engine can operate in harsh climates: “New design solutions guarantee reliable operation in areas not only with a temperate climate, but also in desert areas with high temperatures, as well as in conditions of high mountains, such as, for example, in Syria.”

In addition, the newest Havoc has networking capabilities. “Electronics will allow pilots to receive target designations from advanced aircraft designers and intelligence units, which will greatly increase the effectiveness of interaction with ground forces, since the detected targets can be destroyed almost instantly,” says Izvestia.