Every country in the world, which has a combat-capable army, has a lot of tools capable of striking the armor of a tank or other armored vehicles. In particular, one such means are anti-tank missile systems, which have long been an integral part of any military operation. Today we will talk about the 10 best anti-tank missile systems in the world! 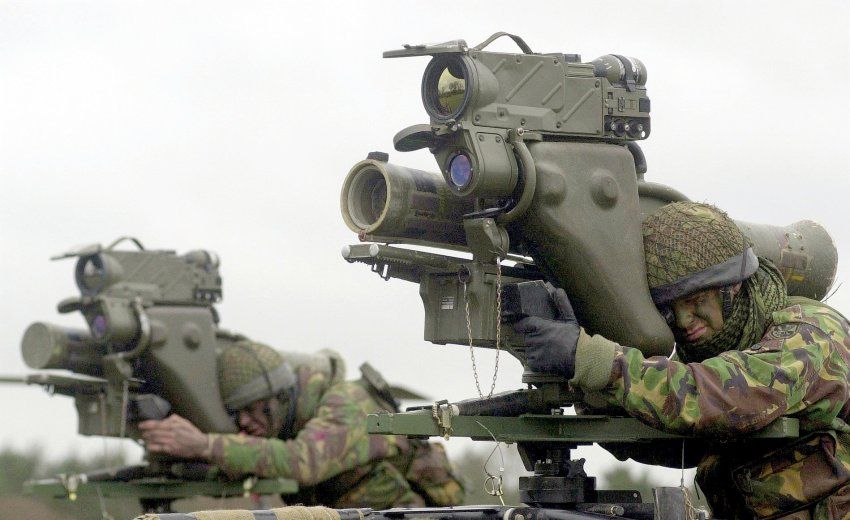 The Milan ATGM system was developed in 1962 to arm the Bundeswehr (German Armed Forces), which required powerful and sufficient mobile weapons to destroy tanks. The missile system consists of a launch pad, a container with a missile and a launcher consisting of a sight, an electronic unit, a remote control and a power source.

“Milan” missile launcher has a command semi-automatic guidance system on the line of sight with the transfer of commands from the PU to the missile on the wired line of communication. The Milan missile station has a range of 75 to 3,000 meters. 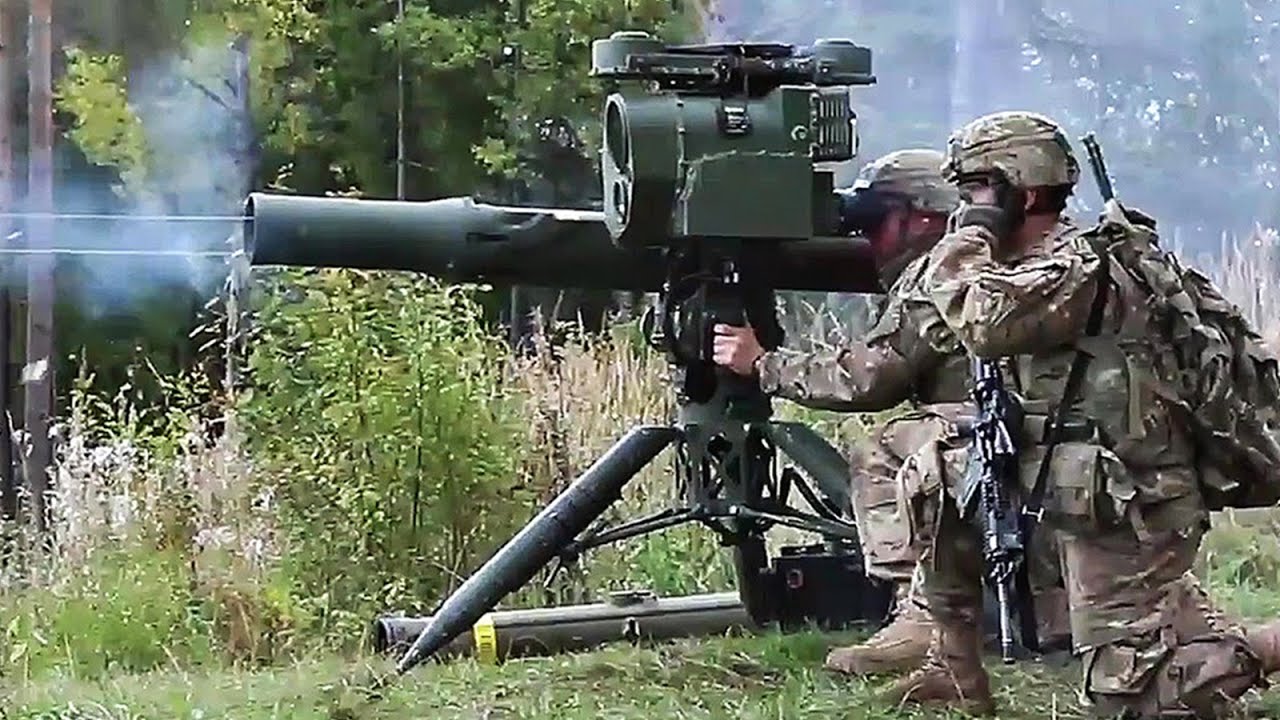 The U.S. BGM-71 “TOW” was developed by Hughes Aircraft and entered service with the U.S. Army in 1970. Since then, it has been continuously modernized and modified to meet changing demands. The ATGM can be launched from a portable launcher or from the launchers of various vehicles and armored vehicles.

The maximum launch range of the missile is 3,750 meters. The atGM is guided by a conventional electronically-optical sight. The central mark is pointed at the target, the launch is made, and then before the rocket hits the target, the operator holds the mark on the target. The rocket’s flight speed is subsonic – 250-260 m/s. The combat part of BGM-71 “TOW” is cumulative and cumulative tandem in BGM-71 “TOW-2A” 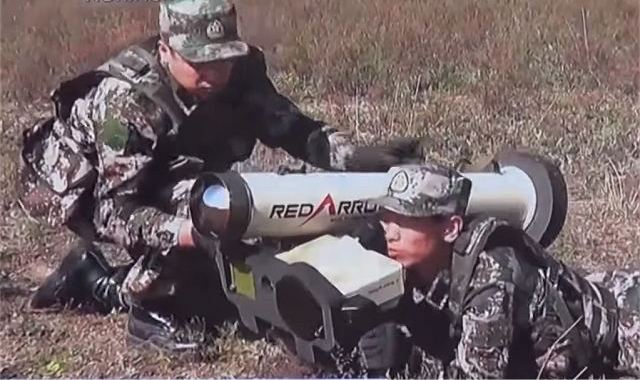 The Hongjian-12 is a third-generation, man-portable, fire-and-forget infrared homing anti-tank missile of China. It was unveiled at the Eurosatory 2014 exhibition.

According to the manufacturer, the missile of the HJ-12 complex is equipped with a type IIR homing head with an uncooled photodetector. It is argued that such a system allows the use of ATGMs at any time of the day. There is information about the creation of a second type of rocket, intended for use exclusively in daytime and equipped with a television seeker.

It can hit targets including tanks, bunkers, small ships and helicopters from above, where armor is likely the thinnest, with a penetration capability of 1,100 millimeters. The HJ-12 enables soldiers to lock on target, fire and then move on. The ATGM is a ‘fire and forget’ missile having no guidance system. 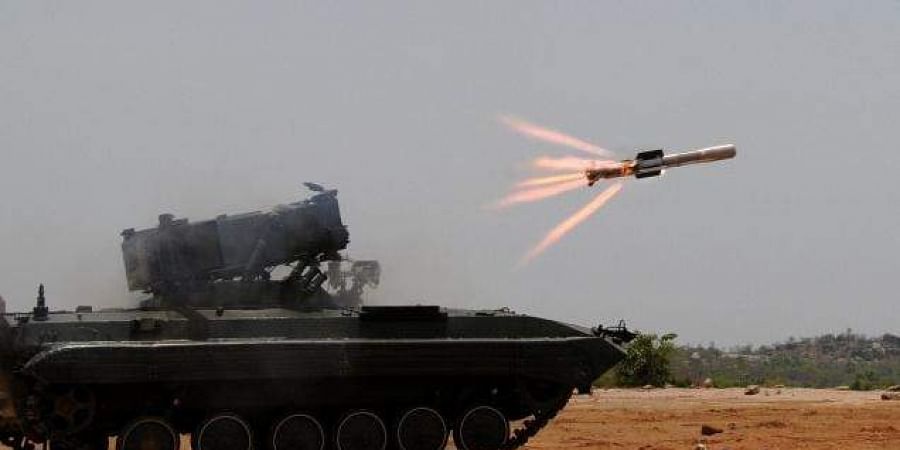 The Nag missile is an Indian third-generation all-weather, fire-and-forget, lock-on after launch, anti-tank guided missile (ATGM) with an operational range of 500 m to 20 km, where  MPATGM has a range of 2.5km.

The weight of NAG MPATGM is only 14.5 kg. This virtually jam-proof missile ensures a high-hit accuracy in both top-and front-attack modes. The Nag is visible only during the first one second of flight when the missile’s booster imparts 90% of the momentum; after that, a sustainer maintains the missile’s speed, burning a smokeless propellant that is practically invisible. 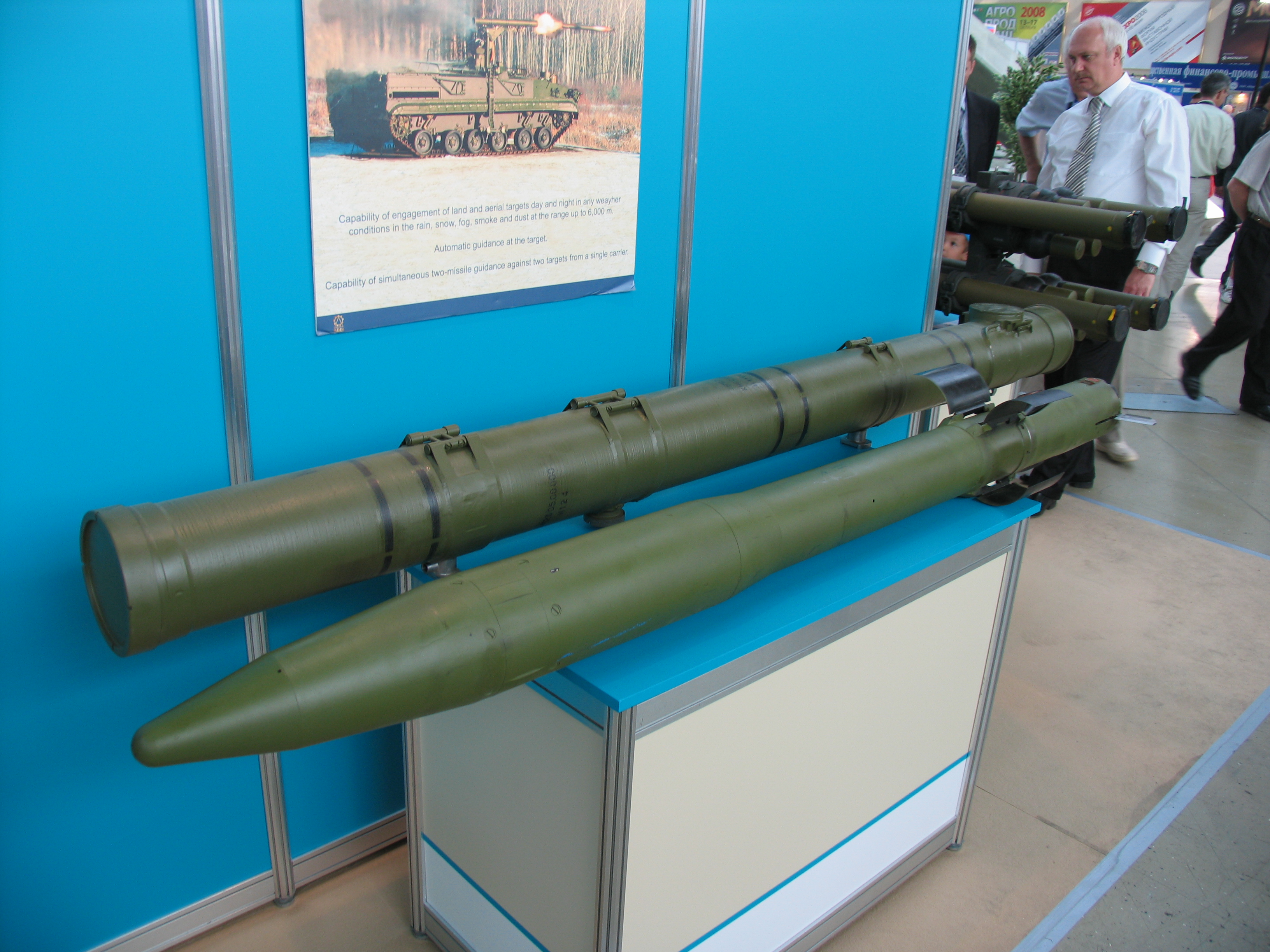 The 9M123 Khrizantema is a Russian anti-tank guided missile. Khrizantema was designed to deal with current and future generations of main battle tanks and can also be used to engage slow and low flying aerial targets like helicopters. The 9M123 missile together with its associated guidance system forms the 9K123 missile system. The FJM-148 “Javelin” missile defense system is designed to hit armored vehicles and low-flying low-speed targets: helicopters, UAVs and incoming propeller aircraft. The FJM-148 “Javelin” is the first third-generation mass-produced ATGM. The ATGM entered service with the U.S. Army in 1996.

The FJM-148 Javelin anti-tank guided missile has a tandem combat unit, folding wings, an infrared homing head and two engines: launch and marching. The system of “soft” ignition of the marching engine occurs after the rocket departs to a safe distance for the shooter and allows shooting complex from closed premises.

One of the main critics of the complex is connected with its relatively short range, only 2.5 km. Rocket, with a diameter of 127 mm, is capable of hitting armor up to 750 mm thick. 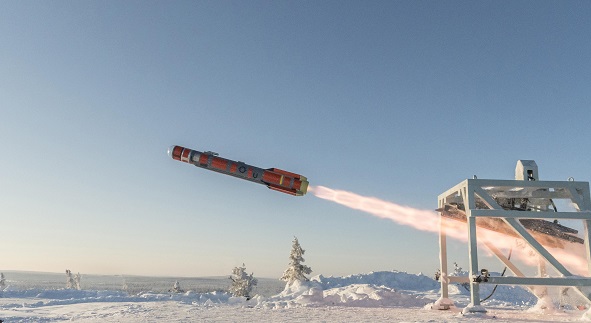 Developed by Matra Defense and BAe Dynamics (MBDA), it is a highly effective, all-weather, autonomous missile that uniquely offers the capability to engage targets in the deepest parts of the battlefield beyond the range of other systems. Brimstone has a Tandem Shaped Charge (TSC) warhead that employs a smaller initial charge, designed to initiate reactive armor, followed by a larger, more destructive charge, designed to penetrate and defeat the base armor.

Brimstone provides a combat proven, low collateral, close air support weapon offering to the fast jet operator the unique capability of engaging a wide range of target types, including fast moving vehicles / vessels in both land and naval environments and in both direct and indirect modes. 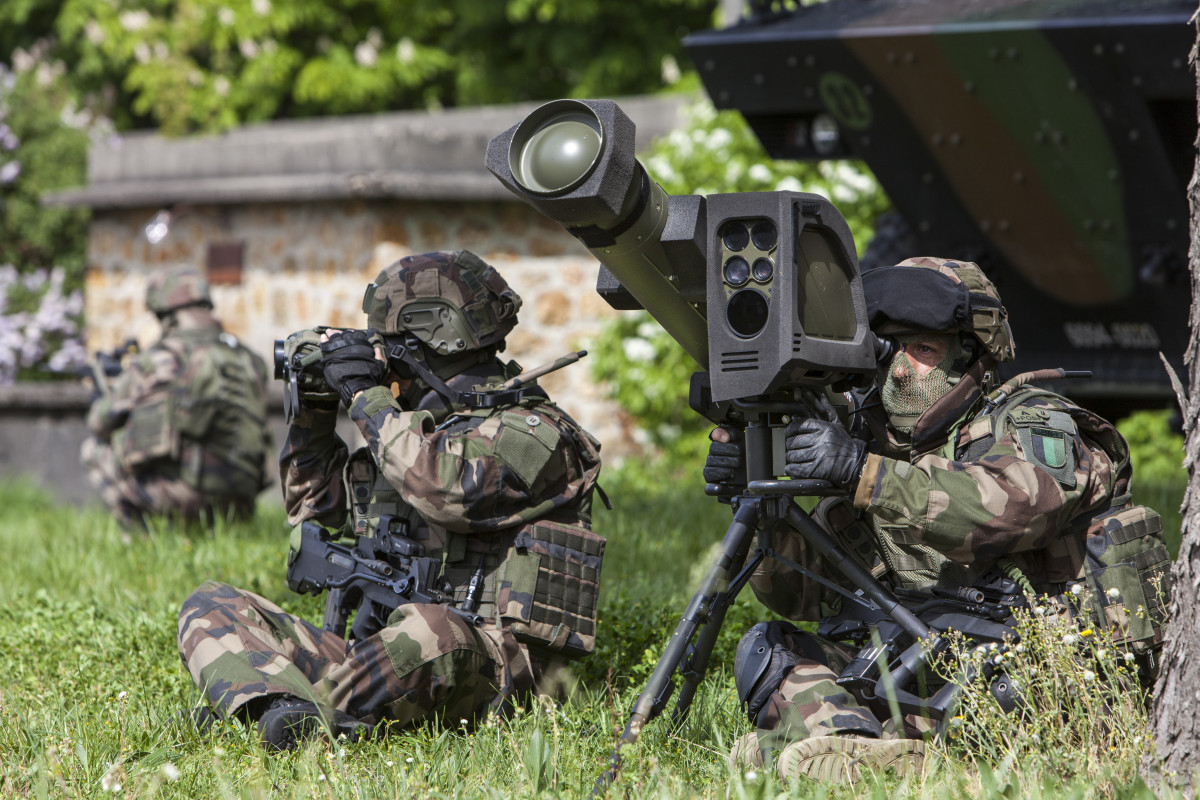 The fifth-generation MMR was designed to replace the Milan and Javelin ATGMs. The complex is equipped with a combined guidance system, which includes thermal imaging, television heads of homing, inertial navigation system, as well as guidance on fiber optic cable. Fiber communication allows you to broadcast the image to the launcher and control the rocket. The flight path can be both direct and ballistic, designed to hit tanks in the roof of the tower.

The cruise speed of the rocket is 160 m/s. The maximum range is 4.1 km. Armorability for dynamic protection, according to the developers, is 1,100 mm. 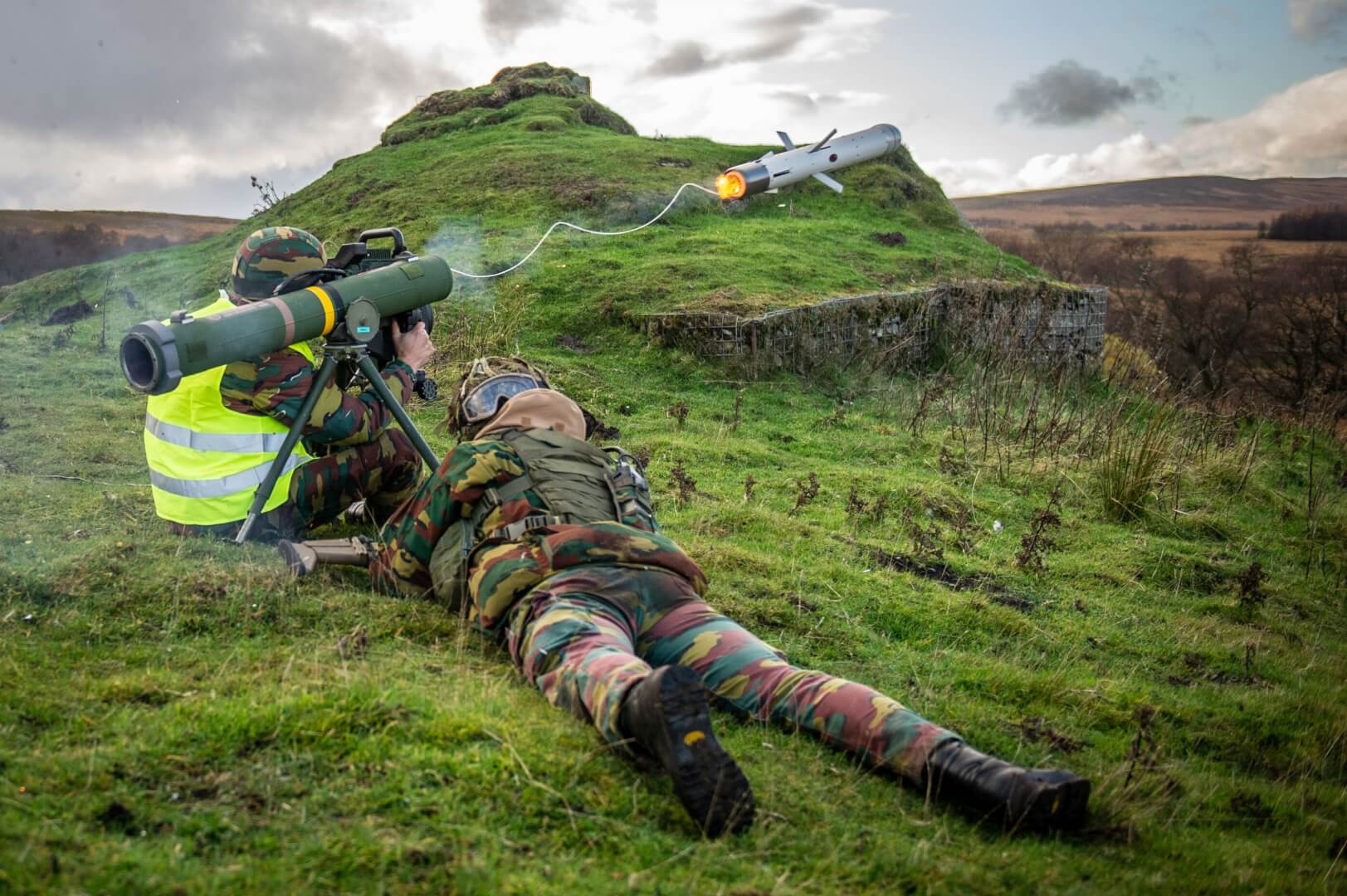 The Spike NLOS, developed by Rafael, has autonomous missile guidance and has been developed with the capability of its use by various types of Armed Forces: for arming infantry, installations on military equipment or for use from helicopters. The Spike “NLOS” missile is the largest and heaviest in the entire family. Its starting weight reaches 75 kg, and the length exceeds 1.5 meters.

Such dimensions and weight allowed to equip the rocket with a solid fuel engine, capable of bringing the range of flight to 25 km. Missiles are delivered in transport-launch containers of rectangular shape. The container is installed on the launcher, which in turn can be used with different platforms.

For example, the Israeli army actively uses Spike “NLOS” missile systems based on Humvee-American-made vehicles. The maximum armorp roofness behind the dynamic sewn is 1,000 mm. 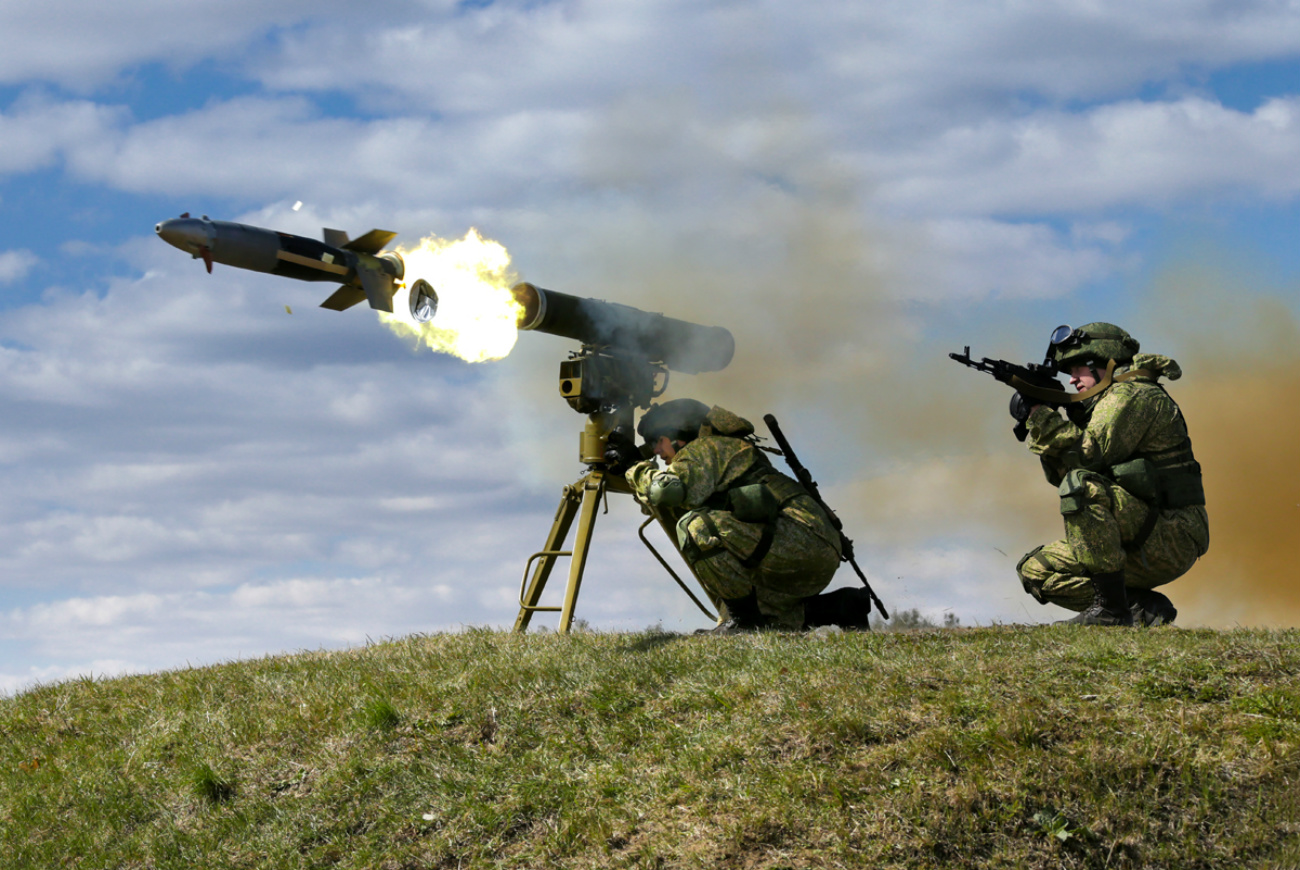 Kornet is the development of the Tula Instrumentation Company. The ATGM is based on the Reflex tank-guided weapons complex while retaining the basic layout solutions. The Kornet anti-missile system is designed to hit tanks and other armored targets, including modern dynamic defenses.

The latest version of the Kornet launch devices implement the concept of modularity and the “shot and forget” principle, which is possible through the machine gun capture and escort of targets, but the target must remain within sight of the launcher until the missile hits.

The Kornet anti-missile system can overcome modern means of active protection by launching two ATGMs at the same time. On the missile caliber 152 mm, in addition to the cumulative combat unit, can be installed and thermobaric part of the high-explosive action, which is perfectly suited for suppression of the enemy’s firing points and its manpower. There is a modification of this complex – “Kornet-D” ATGM, which provides armor-proofness up to 1,300 mm and a range of up to 10 km.