The Russian-Ukrainian conflict broke out for more than one month, and Russia still has not made much progress. Kyiv and Kharkiv are still firmly in the hands of Ukraine, and Mariupol in the south has not been attacked for a long time. Western help to Ukraine is still being provided, and the Russian special military operation seems to be far away from the end. So we found three problems in the Russian military that causing heavy damage to the Russian armed forces, and it is very likely to fall if it does not adjust.

According to public media reports, when the Russian-Ukrainian conflict broke out, Russia deployed a total of 150,000 troops, and attacked from four directions: Belarus, Kyiv, Kharkov and Crimea. Major Ukrainian cities such as Kharkiv forced the Ukrainian government to talk with Putin for a resolution. But what I never expected was that the Ukrainian resistance was very tenacious making Russia pay a huge price for every step forward, more than 6 Generals had already been killed, and the death rate is as high as 25%.  Russia lost around 17,200 men in this battle, according to Kyiv Independent. 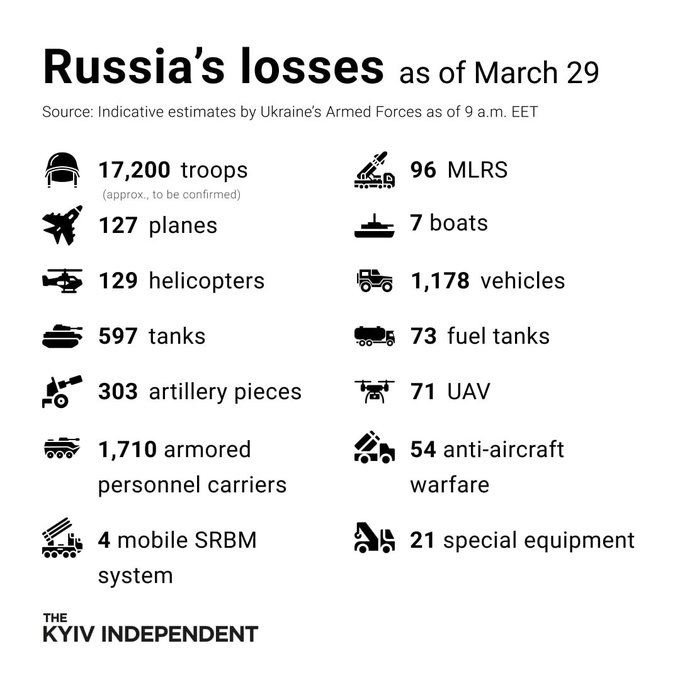 On March 21, Russia’s Komsomolskaya Pravda published an assertion that 9,851 Russian troops were killed and 16,153 wounded, but the news was quickly deleted from all platforms. NATO estimates that the Russian army lost around 7,000 to 15,000, with a total casualty of more than 40,000. If this figure is followed, the loss of the Russian army in Ukraine will exceed 26%.

Due to the weaker economy of Russia, after the USSR collapsed, the country was unable to fund enough money to strengthen its force. The size of the Russian army has been shrinking, from about three million to less than one million at present. In order to ensure Russia’s status as a major military power, the Russian army has focused its limited military expenditure on the maintenance and renewal of its nuclear arsenal and the research and development of strategic nuclear submarines. At the beginning of the Ukrainian conflict, the Russian military used few precision-guided weapons. Except for the 160 Iskander missiles and cruise missiles that were launched on February 24, now Russia uses few cruise missiles or guided missiles to attack, whether it was the air force or the army aviation mainly used rockets and bombs to approach the attack, resulting in relatively large losses. For example, the Su-34 bomber was shot down by the stinger.

This tactic makes many people think that the Russian army is fighting a traditional war in the new century, and directly doubt the strength of its second military power. Later, in the face of the continuous strengthening of Western weapons assistance, in order to cut off Western weapons assistance, Russia began to use long-range precision-guided weapons to attack cities in western Ukraine. Not only did it use Kalibr cruise missiles, but it also used Dagger hypersonic missiles twice. According to U.S. Statistics, the Russian military has launched more than 1,000 Iskander and Kalibr and other cruise missiles since February 24, which is more than half of its inventory.

Russian missiles have begun to exhaust and will face more problems in the coming days: First, the missile attack on Dolvov was stopped. 8 days ago, after the Russian Tu-160 launched six KH-555 heavy air-launched cruise missiles, there was no air attack on Lviv anymore. Western arms aid is still continuously transported various weapons to battlefields in Ukraine through Lviv.

The second is to start attacking ground targets with shore-to-ship missiles. On March 19, a spokesman for the Russian Ministry of Defense claimed that the K-300P system was used to “destroy the radio and reconnaissance centers of the Ukrainian army in the Odessa region. The K-300P system is a costal defence system, originally intended for anti-ship use, and now It is used to strike fixed targets, which fully shows that the Russian missiles are currently seriously insufficient. Whether the Russian military can quickly replenish missiles depends on two factors: one is the production capacity, and the other is the purchase cost.

According to research and analysis by U.S. Army Lieutenant Colonel Alex Vershinen, the Russian Army’s logistics force was not designed for large-scale ground attacks except railroads. In the Russian Army’s mobile corps, the size of its support force is lower than that of its Western counterparts. Only the logistical capabilities of the brigades are comparable between the two sides, but this is not an exact comparison. The number of combat vehicles deployed by the Russian Army is only three-quarters of that of the U.S. Army, and it is difficult for logistical support to maintain the continuous offensive of the Ukrainian Army.

At the same time, during the Russian-Ukraine conflict, Ukraine repeatedly used drones and other equipment to attack the Russian army’s supply team, and achieved good results. For example, 200 Russian military vehicles flocked to western Ukraine at one time, trying to send supplies to the advancing Russian army.

In order to improve the supply capacity, the Russian army even used a large number of civilian vehicles, but it still cannot guarantee effective supply. As a result, many Russian armored vehicles broke down after entering Ukraine because of maintenance problems, parts some even stuck in the mud, and most hilarious is running out of fuel. Infantry, armor vehicles are the backbone of armed forces and it affects combat effectiveness if stability cannot be guaranteed. Therefore, there are a large number of tanks and armored vehicles abandoned by the Russian army in Ukraine, all due to logistical reasons.