Few people know that in the past the Soviet Union had built a huge nuclear powered aircraft carrier, with the same power as the US Nimitz-class super-carrier. Unfortunately, the breakup of the Soviet Union led to the sudden death of this ship.

At the end of the Cold War, with the ambition to prevent the US Navy from approaching its shores, the Soviet Union carried out a huge project to build the largest aircraft carrier named Ulyanovsk. This aircraft carrier was planned to runs on nuclear power. 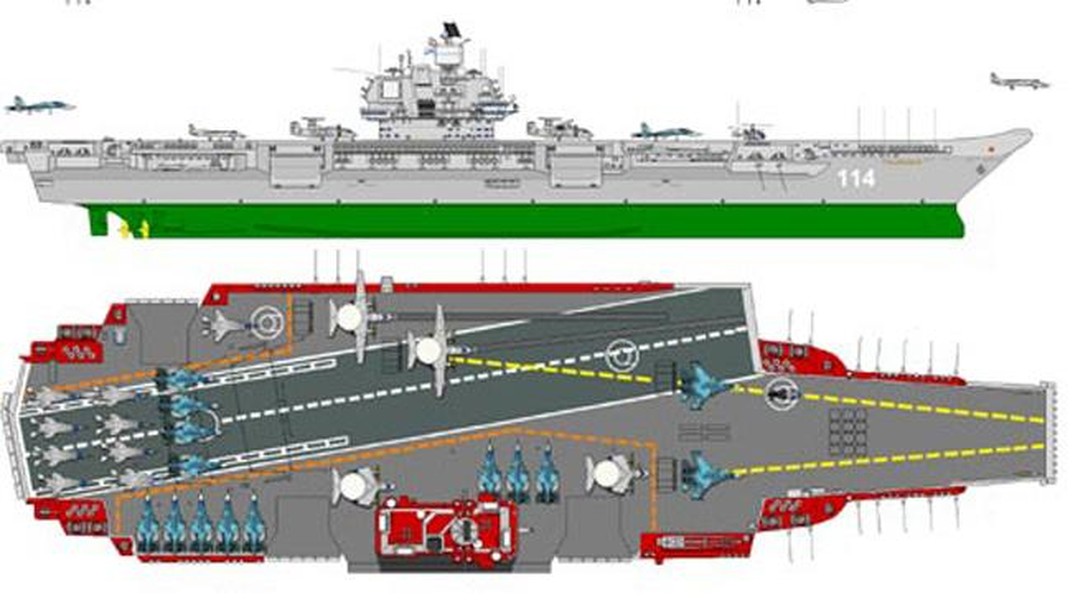 Technical drawings were approved and transferred to the Black Sea shipyard in Ukraine, also known as South Nikolayev Shipyard No. 444 in 1988. The factory famous for built battleships like Moscow-class helicopter carriers and Kiev-class aircraft carriers, but none can match the grandeur of the Ulyanovsk.

If it was launched then The Soviet Ulyanovsk aircraft carrier will be a giant battleship more than 300m long, weighing 85,000 tons and capable of accommodating a squadron of 70 aircraft of all types.

The supership was equipped with four KN-3 nuclear reactors, originally designed for the giant Kirov-class armored cruisers and the Frunze heavy missile cruiser. Therefore, the Ulyanovsk train can easily reach a speed of nearly 56 km / h when traveling.

The super carrier will have at least 44 fighter jets, including the Su-33 and MiG-29K, carrier-based versions. The onboard take-off and landing support system was also considered modern for that time.

The ship’s designers planned to install three elevators, each able to carry 50 tons, to move aircraft in and out of the deck hangar. In addition, the ship was also equipped with helicopters for search and rescue and anti-submarine warfare missions.

Close-up of the hull under construction at that time. Soviet engineers calculated that the ship would have 3,400 sailors, nearly half the number of sailors on a US Nimitz-class aircraft carrier, although this is still a significant number compared to other Soviet ships.

However, the Ulyanovsk was only 20% built when the Soviet Union broke up in 1991. By 1992, Russia was experiencing economic difficulties, could not afford to maintain expensive military programs, and the Ulyanovsk was scrapped. With an ambitious project in the Soviet era but ultimately sold for scrap by Russia, military analysts could not help but regret it.

Currently, Russia is ambitious to revive the dream of building a nuclear super-carrier with a large payload to compete with the US, but the quick dismantling of scrap of the Ulyanovsk super-carrier makes many people regret.

Russia is maintaining only one aircraft carrier Kuznetsov in service, but this ship is constantly breaking down and its performance is not as expected