Russia currently has the fourth generation T-14 tank and the third generation T-90M. There is also the improved and upgraded tank, the T-72B, equipped with infrared thermal sights to target and patrol the battlefield day and night. There is also a state-of-the-art fire control system that includes a digital ballistic computer and an array of sensors to measure everything from wind speed and direction to gunpowder temperature. In addition, the range of infrared thermal imaging sights, target detection and identification was extended to several kilometers, including at night and in difficult conditions such as smoke on the battlefield.

Everything seemed fine, but something seemed missing. After battlefield inspection, everyone found that the upgraded T-72B variant has a fatal design flaw. A strange situation: the T-72B provided the tank gunner with a thermal imaging camera, but deprived the commander of his rights

The gunner’s and commander’s sighting equipment were different, and the gunner had an infrared thermal imager that could see targets at night. But the commander’s viewing sight was only equipped with an ordinary optical mirror, and once there was smoke, nothing could be seen and could not be ordered. And without a commander, the gunner can’t take any action.

To perform these tasks, the commander’s workplace is equipped with a TKN periscope sighting and observation device that can be rotated in a loop to gain panoramic views.

However, when active illumination with infrared searchlights is used, visibility does not exceed one kilometer. Unlike image enhancer tubes, thermal imaging cameras can see infrared radiation from the target, which is in very strong contrast to the background on the ground Installed on the T-72B3 and T-80BVM thermal imaging cameras, it reached 5 km.

But this difference is evident not only at night, but also during the day. Under these conditions the Commander has only one optical channel. What if the battlefield is covered with fog and smoke? Even in these jams, the gunner with the thermal camera could see the target, but the commander can’t see through smoke or fog

First of all, in addition to the ability to shoot from artillery and machine guns, commanders should get the maximum all-around view from tanks so the commander can guide the rest of the crew, at any weather conditions and time of day.

Second, when the commander discovers and identifies the enemy, issues accurate target designations to the gunner, including due to automatic target tracking. All this greatly improves the combat effectiveness of the machine.

Upgraded T-72B3. In the middle, above the hatch used to eject the waste pallet, there is a panoramic viewing device. 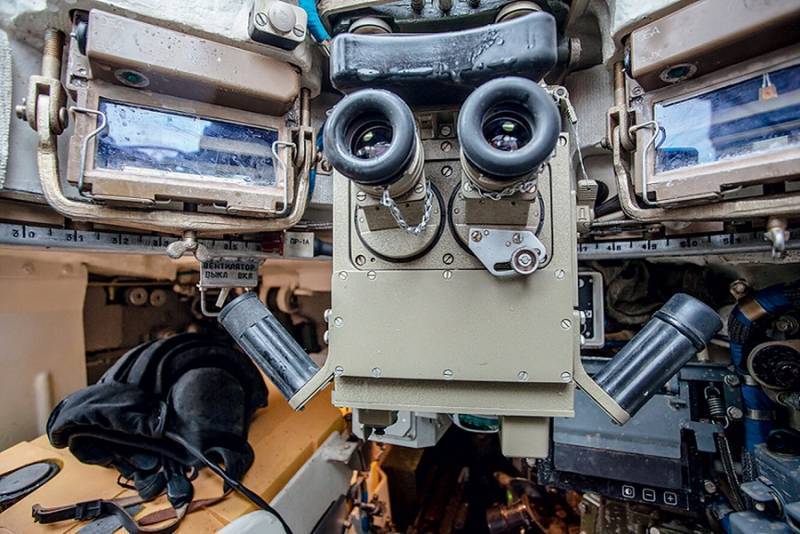 Commander’s observation device TKN-3MK on the T-72B3. Behind the right side, you can see the display of the “dual” system, which shows an image from the gunner’s thermal aimer.

Senior Russian military officials are well aware of this and hope that the multi-channel panoramic sight will not become the exclusive prerogative of the T-90M and will also be included in the modern upgrade kit of the T-72B3 and other tanks.

Russian netizens said that the T72 B3 is the most sloppy Russian tank. The commander did not have a panoramic multispectral gyro stabilization observation device and could replace the gunner’s sight in case of damage. There are no instruments for all-round observation of the driver. During the march and searching for the enemy in unfamiliar terrain, the crew was completely blind.

Russian tank models, like the T-72 have a smaller and lower profile than their western counterparts. Because inside their turrets are less crews, with the autoloaders doing the work of the gunners.

As its name suggests, the use of autoloaders eliminate the needs for manual loading of ammunition in the main gun by a crew member. Everything is done through mechanical means, hence there is no need for an extra hand to feed the gun. And with less crew, means more space, and less weight. Less crew also means smaller tank profile, hence presenting less target to hit.

Autoloaders of the Russian T-series looks good in paper, but it has one fatal flaw. And that’s the ammunition storage. The ammos are stored in a carousel-type configuration, right in the turret and near the crew. And when the heat or shockwave of the blast causes detonation of all the tank’s ammunition and propellant, causing a rapid pressure inside the sealed internal compartment of the tank until it explodes outwards through the weakest point in the compartment, namely the turret ring, blowing it straight up into the air.

In Indian tank like the Arjun MK1A, ammunition rounds are stored in a containerised ammunition bin with an individual shutter with blow off panels to mitigate the hazard caused by ammunition cook off. In Arjun MK1A, the driver’s safety and comfort is enhanced with roof mounted seat to protect him from Shock waves.

Insufficient protection of the sides of the tank hull, including the automatic launcher and the entire area where the ammunition is loaded. Reverse speed is slow, which is very necessary for urban warfare making the T-72 useless.