The Dreadnought class is the future replacement for the Vanguard class of ballistic missile submarines. The first two submarines, Dreadnought and Valiant, which have undergone significant design changes compared to existing ones, are already under construction. They are expected to enter the UK Navy in the 2030s.

Speed, depth and countermeasures can help a submarine escape, but stealth is the best way to survive. Therefore, submarines which are under construction today will be more subtle than those already in service.

The new Dreadnought class of submarines for the Royal Navy, currently under construction, includes innovative capabilities that promise to take submersible stealth to the next level.

Four Dreadnought class submarines are being built to replace the current Vanguard class submarine fleet. They will be armed with Lockheed Trident-II D5 missiles to provide the United Kingdom with a maritime advantage. Their size will be slightly larger than the existing ones for the possibility of implementing a number of new stealth technologies. In an underwater arena, being inconspicuous basically means being quiet, so new boats will be the quietest.

Since the 1980s, soundproofing “anechoic” tiles have been installed on submarines. And the current generation Astute Class has an anechoic coating. This provides a better fit and optimal performance compared to adding tiles after the boat is built.

The Astute case is completely covered with anechoic tiles. Added to this is a distinct cheekbone that runs around the bow, and the top of the body and fin are angled to reduce sonar reflections. In the Dreadnought design, the cheekbone runs along the entire length of the hull. This testifies to the new design of such submarines. 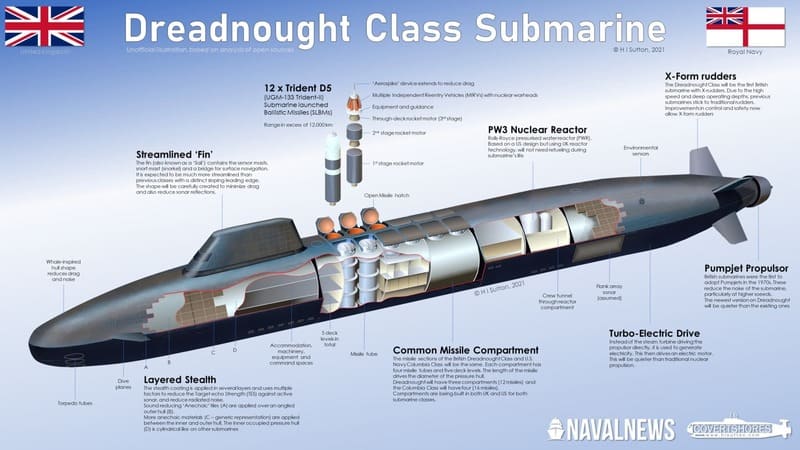 At Dreadnought, the outer casing completely encloses the cylindrical inner casing. In this case, the outer hull will be much lighter than the basic “double hull” design typical of Russian submarines. And his goal is different. In a common missile bay, which will be the same as that of the US Navy’s Columbia class, the submarine’s hull remains single-hull. This means that it has reinforcement rings (called frames) inside it. For Russian Submarines, these frames are installed externally between the two hulls, and the outer hull is used as part of their structure.

To reflect incoming active sonar, the outer enclosure will be covered with anechoic tiles. And it is likely that the anechoic coatings will spread inward, into the flooded area between the inner and outer hulls.

Several other designers are also adopting this new approach to creating double-hull submarines. The Type-212CD, developed in Germany, will have an even more prominent curved outer casing. However, there is no suggestion that the British design was borrowed from a German boat. And complex multi-layer anechoic treatment is probably unique.

The outer enclosure also has some advantages, creating more space under the enclosure. It can be assumed that this space will be able to accommodate future sensors, unmanned underwater vehicles and countermeasures. It also appears likely that side-array sonars will be flush with the outer hull. This will be significantly better than the current British and American boats to which they are added as patches.

Other stealth improvements will be internal. For many years in leading navies, major developments in submarine stealth have focused on a quieter propulsion system. Royal Navy boats are already considered very quiet in this respect. But Dreadnought will have a new turbo-electric drive.

Turboelectric drives use a nuclear reactor to generate electricity, which is transmitted to an electric motor that propels the boat. This is much quieter than with direct rotation of the propeller drive shaft. While turbo-electric drives have been used aboard nuclear submarines in the past, this one (along with the US Navy’s Columbia class) will be the first time such a drive will be used on a series-produced submarine. And on Dreadnought, it will be powered by an improved, quieter jet pump.

Like the most inconspicuous submarines in existence, Dreadnought will have protection against electromagnetic detection and tracking. And we can assume that its outer surface will be different from previous versions.

Of course, not all of the planned will be implemented in the final version, but it will be possible to find out about this only when the boat is launched. There is a natural tendency towards secrecy in submarine design. And besides, often some features are added or removed already during construction, often for cost reasons. However, based on what is currently known, the Dreadnought class can be expected to take on a new level of stealth.

Two battalions of the Polish army entered the territory of Ukraine