The interest of American soldiers with the AK-47 assault rifle on the battlefield never ended; even in past It is a fact that in combat, they often choose AK-47 as a weapon and US commandos hate US-made weapons.

While the Soviet AK-47 assault rifle became the weapon of direct confrontation with the West; The fact is that American commandos really like to use this gun in the Vietnam battlefield.

When the Vietnam war ended, the US military even copied the AK-47s, created new ammunition for them and gave a few other surprises, but American commandos didn’t like the US variant of Ak-47 guns.

According to war historians, the soldiers of the South Vietnamese Liberation Army were very skilled in using AK-47 assault rifle. This led to the AK-47 becoming a prestigious weapon, making an important contribution to the AK brand globally.

After sending troops into South Vietnam, the commandos of the US Army and the US Navy (SEAL), became familiar with the trophy AKs and quickly became an important weapon in the arsenal of these forces.

First, the American M-16 assault rifle is pretty bad. The original design was a nightmare to clean and maintain, as these guns frequently jammed during battles with the Liberation Army. Meanwhile, on the other side of the front line, the AK-47 is much more reliable and has a 30-round magazine, for longer firepower.

American soldiers believed that they could embarrass their opponents by using their own weapons against them, especially in the dead of night. Due to the AK road marking bullets glow green, instead of red – the standard color in the Western military.

Military author Kevin Dockery quotes an unnamed SEAL officer as writing: “With the few men we had, we didn’t have enough firepower to confront an enemy unit. The explosions of the M-16 will tell the enemy where we are and who we are.

And the Pentagon’s battle plans called for American troops to scour the countryside of Vietnam, looking for the Liberation Army and their weapons supplies. Therefore, the US Army has obtained a lot of guns and AK rifle ammunition to supply the commandos. 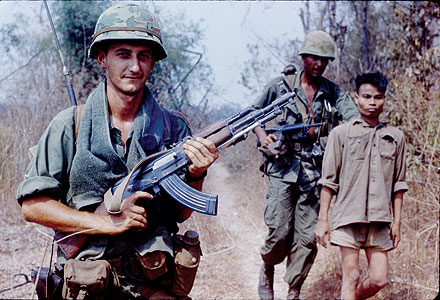 For example, a SEAL report on the number of spoils of arms recovered, only states: “7,400 rounds of AK-47, retained for SEAL Team Two”; According to Dockery, “The most common source of ammunition, is from captured weapons and ammunition”.

The Pentagon also began developing its own secret supply chain of AK-47 guns. US government contractors, have made AK ammunition without any identification, to equip commando groups operating in the 3 Indo-china region.

However, the Pentagon’s top-secret Military Support Command (also known as the Vietnam Research and Observation Group, or MACV-SOG), regularly sends troops across the border, to hunt Searching for convoys of North Vietnamese goods to support the Southern battlefield, on the Ho Chi Minh trail.

MACV-SOG soldiers became one of the largest users of AK submachine guns. In September 1970, the group even requested the US Army’s Ground Operations Laboratory to modify the AKs, retrofit silencers, and sights.

In addition, the US side also produces AK bullets, which can explode right in the barrel, causing danger to users; then managed to bring it back to the Liberation Army bases.

MACV-SOG experts explained: “The goal of the program was to cause incidents and casualties to the liberators, to incite suspicion, fear and distrust of Soviet and Chinese weapons. “. This is a very sinister plot of the US.

After the US carefully read the Paris Agreement, ending the war and withdrawing troops from South Vietnam; AK submachine guns remain in the US special operations arsenal for training purposes.

But America’s “love” with the AK-47 on the battlefield has not ended. Today, with the end of the Cold War and the AK-47 still in widespread global use, the Pentagon continues to purchase these guns on the open market, for delivery to Washington’s allies; especially in the Middle East.