The tape-fed model was presented during a video presentation on May 6. The novelty is distinguished by the compactness of assault rifles with the characteristics of full-fledged machine guns, which allows us to talk about a new class of weapons.

The machine gun is built around a concept that “operations in urban areas have become the rule, not the exception,” said Yves Roskam, development manager at FN Herstal. This requires the maximum firepower of a single combat unit. So, FN Evolys can be equally effective in battles at close ranges, suppressing and aimed fire.

Evolys is built using parts from other FN models. So, the telescopic butt, adjustable in height and reach, the receiver, and sights are similar to the FN SCAR-H assault rifle. The mass of the machine gun also brings it closer to assault rifles – the version chambered for 5.56×45 mm weighs 5.5 kg, and the mass of Evolys chambered for 7.62×51 will be only 6.2 kg. For comparison, a Minimi machine gun chambered for a similar cartridge weighs 8.1 kg.

Low weight, coupled with well-thought-out ergonomics, allows for effective fire from any position. For prone shooting, folding bipods made of composite materials are provided. A two-way switch for firing modes allows you to select single or fully automatic mode.

The Evolys machine gun received a hydraulic recoil brake, which reduces recoil and provides a constant rate of fire. This allows you to combine a high rate of fire with accuracy. The machine gun uses a patented side-feed mechanism. This made it possible to install a one-piece Picatinny rail on which day and night sights can be mounted together, or sights can be added without removing the standard sights. 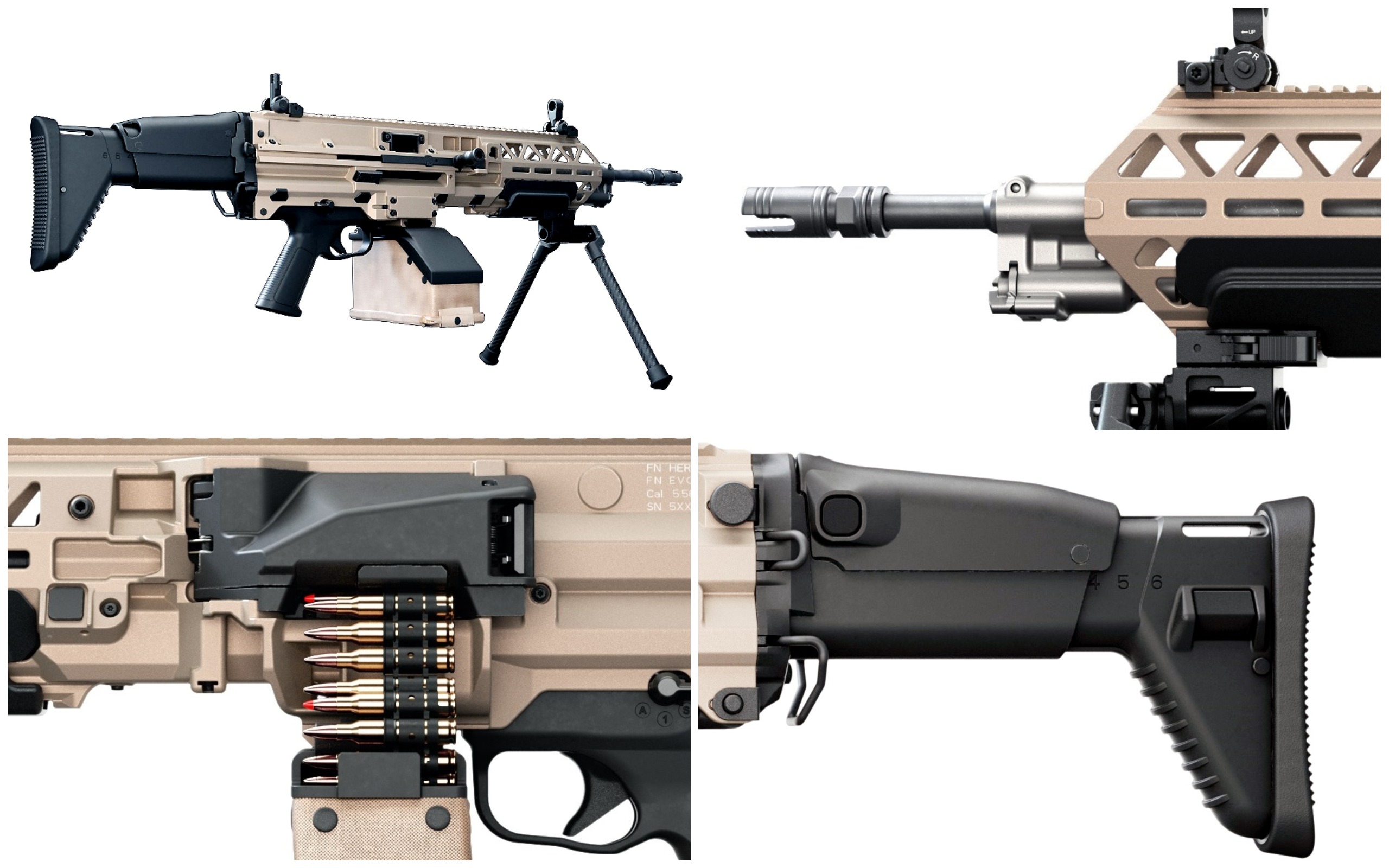 All Evolys controls are single-handed and are designed for left and right hand use. The new mechanism has a positive effect on reliability. For example, cartridges are automatically aligned – if the tape is not correctly placed in the feed tray, and the last link of the tape is ejected automatically, making it easier to reload.

The version chambered for 5.56×45 mm received a 14-inch barrel (355 mm) with which the length of the machine gun is 850 mm with the stock folded. With such a cartridge, the rate of fire is 750 rounds per minute, and the effective range is limited to a distance of 800 meters. FN Evolys under the “senior” cartridge reaches 925 mm in length (barrel – 406 mm). With a similar rate of fire, the effective firing range of 7.62×51 mm cartridges is 1000 m. True, only 50 cartridges are used in a standard box – with a smaller caliber, Evolys can be fed with ribbons for 100 and 200 rounds.

The question of the reliability of the machine gun remains open, in which many elements of assault rifles will have to act with increased loads. On the other hand, the open architecture, and the use of aggregates from other designs, will make Evolys less expensive. If these sides leave no question, the Belgian machine gun could change the equipment of many armies, giving fighters weapons with machine gun firepower and assault rifle ergonomics.