First images of the Russian Navy damaged cruiser Moskva began circulating on social media on Sunday. The pictures were taken just before it sank in Black sea.

On 13 April, Ukrainian sources say they struck the Russian cruiser RFS Moskva with two Neptune anti-ship missiles in the Black Sea. The Russian Ministry of Defense subsequently admitted there was a fire on board, crew being evacuated and ultimately the ship had sunk undertow.

According to some sources, the damaged cruiser Moskva picture was taken from a Turkish ship. The crew of the Russian flagship was evacuated. 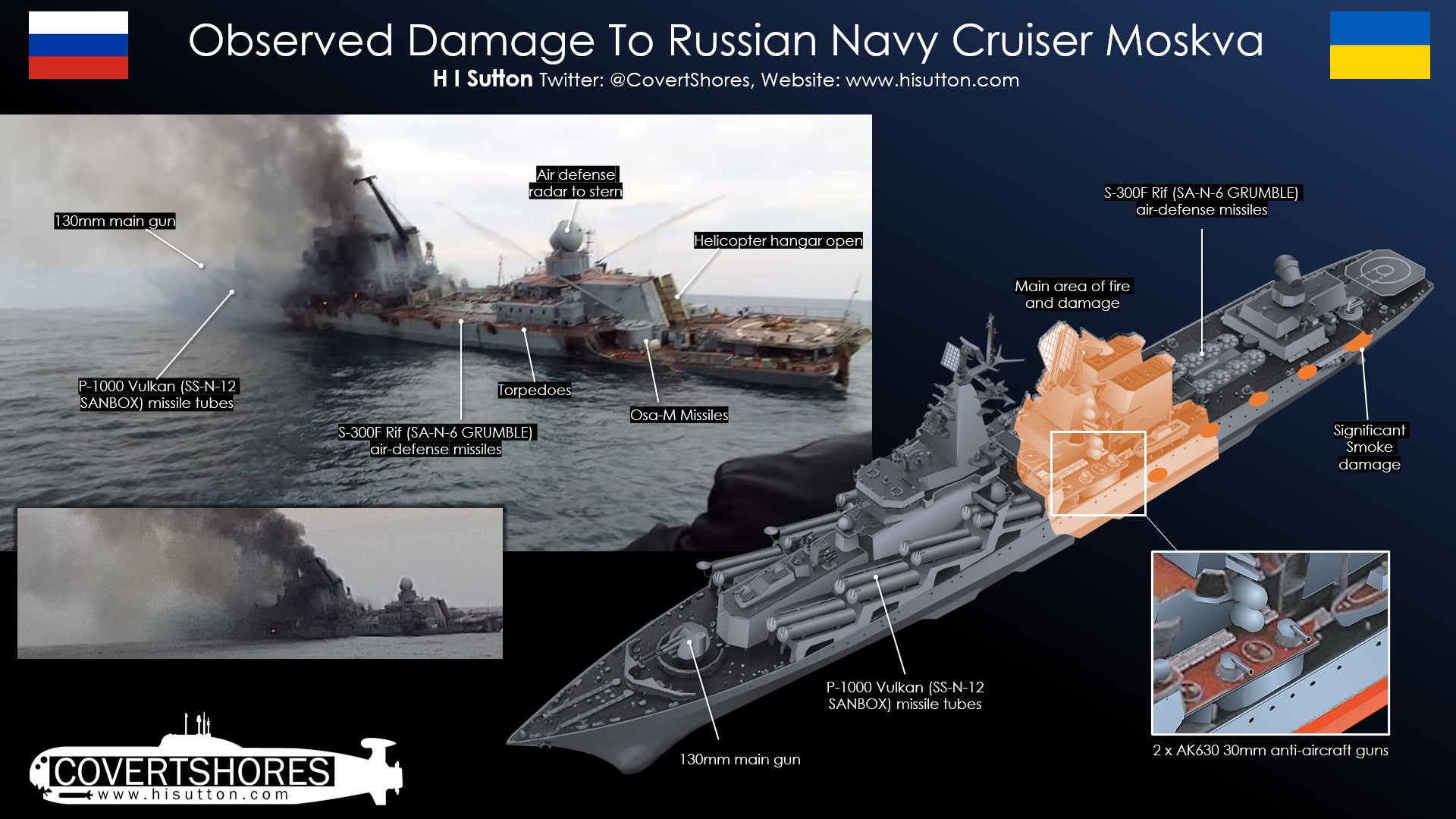 “First analysis shows fire aft of Vulkan missiles and ahead of S-300 missiles, Possibly this is before a larger explosion” said H I Sutton a defence expert.

First impressions of this shocking photo. Life-saving equipment (rescue rafts) on board are missing, which means they were dropped into the water during the rescue operation.

The cargo crane is not in a diametrically position and was apparently used to launch ship’s boats.The doors of the helicopter hangar are open,but the flight deck is cluttered and not prepared for flights. It is likely that the helicopter remained on board the ship.

Numerous black spots on board may indicate an internal fire in the compartments of the ship.The antennas of the air defense and SAM radars are in the diametrically position. Cruise missile launchers are not damaged.

Apparently, the missile strike hit the base of the ship’s bow superstructure. The explosion of the warheads and the burning of the remnants of missile fuelled to the detonation of the anti-submarine ammunition (RBU-6000) cellars, which were located below the waterline.

Unfortunately,the cruiser looks abandoned to the their of fate.There are no other rescue ships and a tugboat visible near the ship, although the time of day and the weather are favorable.Apparently,at the time of taking the photo,the ship had already been abandoned by the crew.

These my express conclusions and analysis of one photo do not claim to be an indisputable truth, but only my assumptions. I think we will get more information to think about in the near future.

However, the ship was not damaged or sank by a storm as Russians claim. The fire and flooding seem out of control which is consistent with damage to large compartments like the Engine room. There is a danger of secondary explosion which makes attempt to salvage dangerous probably sank or was scuttled by the Russian Navy.

However, there are still no solid information whether it was attacked by Ukraine’s Neptune cruise missile or sank by herself due to some malfunction like the Russian claimed.

Moskva was a 12,500-ton cruiser built in Mykolaiv, Ukraine for the Soviet Navy in the late 1970s. She was conceived essentially to lead surface action groups as a ‘carrier killer’ intended to attack NATO carrier strike groups in the open ocean. In this role, her primary armament was 16 very heavy supersonic anti-ship missiles. She was one of three Slava class cruisers completed before the collapse of the Soviet Union. (A fourth uncompleted hulk still languishes in Mykolaiv). Her sisters, RFS Marshal Ustinov of the Northern Fleet and RFS Varyag of the Pacific Fleet were sent to the Mediterranean in preparation for the invasion of Ukraine in an effort to deter any NATO surface units that may attempt to intervene.

The Slava class are very handsome ships and to the casual observer, their obvious heavy armament appears to exude power. When they entered service they were certainly formidable, but 40 years later they have not received significant modernisation and their weapon and sensor fit is very outdated. Russia’s over-reaching naval ambition is not matched by its limited warship construction capacity which was further damaged by the first invasion of Ukraine in 2014 where marine engines and other critical components for its navy were manufactured. There was no hope of replacing the Slava class with modern cruisers and Moskva completed a refit in 2020 that was supposed to extend her in service until 2040. (Had she not suffered this premature demise, she would have been a 61-year-old museum piece when finally retired).

The Slava class have three layers of air defence that theoretically should be capable of dealing with multiple missile attacks. 64 S-300F (NATO reporting name Grumble) area air defence missiles are carried in VLS cells amidships. 2 OSA-MA point defence missile systems (NATO reporting name Gecko) are mounted on the stern. The final layer comprises a total of 6 x AK-630 CIWS (6-barrelled 30mm Gatling guns). None of these systems could be described as modern. The distinctive dome-shaped 3R41 Volna fire control radar for the S-300F has only a 180º field of view and is antiquated when compared with Western equivalents.