In late 2002, India signed an ₹880 million (equivalent to ₹2.7 billion or US$38 million in 2019) deal with Israel Military Industries for 3,070 manufactured TAR-21s to be issued to India’s special forces personnel, where its ergonomics, reliability in heat and sand might give them an edge at close-quarters and employment from inside vehicles. By 2005, IMI had supplied 350–400 TAR-21s to India’s northern Special Frontier Force (SFF). These were subsequently declared to be “operationally unsatisfactory”. The required changes have since been made, and tests in Israel during 2006 went well, clearing the contracted consignment for delivery. The TAR-21 has now entered operational service – even as India gears up for a larger competition that could feature a 9 mm X95 version. There was an attempt to create an Indian version of the Tavor under license known as Zittara, which was not adopted and it was made with a few prototypes from OFB. The new Tavor X95s have a modified single-piece stock and new sights, as well as Turkish-made MKEK T-40 40 mm under-barrel grenade launchers. 5,500 have been recently inducted and more rifles are being ordered. A consignment of over 500 Tavor bullpup assault rifles and another 30 Galil sniper rifles worth over ₹150 million (US$2.1 million) and ₹20 million (US$280,000) respectively was delivered to the MARCOS (Marine Commandos) in December 2010. In 2016, IWI announced that it was establishing a 49:51 joint venture with Punj Lloyd in India, in order manufacture rifle components in India.

The GTAR-21 has a notched barrel, to accept an M203 40 mm under-barrel grenade launcher.

The CTAR-21 is a compact shorter 380mm(15in) barrel variant intended for commandos and special forces, but has become more favored than the standard TAR-21 throughout the IDF.

X95 weapon can be easily configured as an ‘all around’ assault rifle, compact CQB or PDW carbine, or 9 mm submachine gun, which can be further silenced for covert operations.

On the TAR 21 assault rifle, Picatini rails are installed on top and side, on which you can install optical and collimator sights, tactical lights and laser target designators (LTC). The regular diopter sight of later models is removed directly into the Picatini bar.

Initially, the Tavor was equipped with an expensive ITL MARS sight, combined with a laser sight. In order not to bore the soldier by constantly turning it on and off, the sight turns on automatically when the shutter is jerked and turns off when the weapon is unloaded. A laser pointer button is integrated into the forearm of the rifle. The TAR-21 models of the later releases are equipped with a cheaper Merlight sight without a LCR.

The Tavor assault rifle is a bullpup. This term refers to the “linear” scheme, according to which the butt is on the same axis with the barrel. This solution allows you to shift the center of gravity of the weapon closer to the shooter’s shoulder, which provides the weapon with increased accuracy. However, there is a noticeable drawback: sights must be placed slightly above the barrel.

The basis of automation is the removal of powder gases from the bore through the gas outlet located above the barrel and hidden by the weapon body. The barrel is locked by turning the shutter 7 fighting stops – which is similar to the design of the American M16 . The machine also has a shutter lag, its control button is located at the bottom of the case behind the store.

USM – trigger type, placed in the butt. The three-position fuse-translator of the firing modes is located above the pistol grip. In a standard rifle, it is displayed on the left side, but the possibility of installing it on the right is also provided.

A gas piston fixed to the bolt frame has a long stroke. The return spring, partially hidden inside the hollow rod of the gas piston, provides the movement of the bolt frame, “posted” inside the housing on one guide rod. Late venting mechanism TAR-21 – adjustable, with 4 positions.

The supporting body part, which is the stock of the weapon, is made of high-strength composite materials and light alloys based on aluminum. In some places, the case is reinforced with steel inserts. This achieves one of the advantages of the TAR-21 rifle – its relatively low weight. The receiver is waterproof, minimal gaps and openings prevent sand and dirt from entering the mechanism, which increases the reliability of the weapon.

Cutouts for the loading handle are made on both sides, the handle is nominally located on the left. The charging handle itself is not rigidly connected to the slide frame and remains stationary when firing.

The TAR-21 barrel has six right rifling, their pitch is 1: 7. In rifle modifications with a long barrel, this step is 1:10, with a short barrel – 1:10. On the right side is a lock with which you can replace the barrel of the machine.

The barrel is rigidly connected to the top Picatinny rail, on which the sight is mounted. The trigger guard is made the whole length of the pistol grip integrally with the body, as is the grip itself. The trigger pull, depending on the modification, is between 2.5 and 4 kg. Above the pistol grip in the machine case there are 4 large openings on each side for air cooling of the barrel. 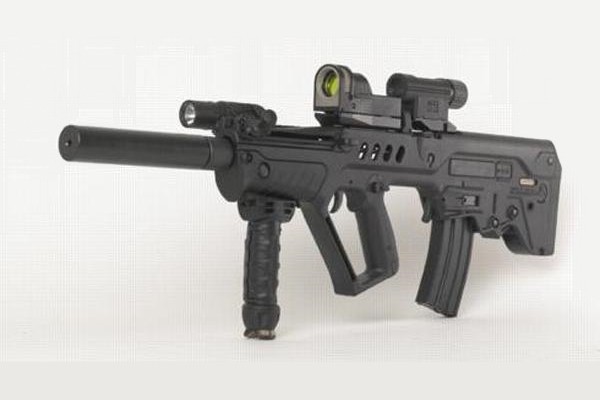 TAR-21 uses standard boxed magazine stores M16 with a capacity of 20 or 30 rounds. This ensures the unification of equipment for various types of small arms in the IDF. Extended stores are optionally used – from 60 rounds to 100 rounds (STANAG), as well as stores for 20/25/32 rounds for the 9-mm version of MTAR-21.

The Tavor TAR-21 assault rifle allows you to fire in two modes: single shots and continuous bursts. The combat rate of fire of this weapon is 750-900 rounds per minute. In the modification of TAR-21 X95S, this indicator was increased to 1200 rounds per minute.

In various comparative tests, TAR-21 showed advantages over its counterparts, primarily the American M16A4, in the following indicators:

It is also noted that the center of gravity shifted to the rear is located close to the shooter’s body and provides him with reliable retention and aiming along the front in motion.

Among the shortcomings of the Israeli Tavor TAR-21 assault rifle are:

In general, the Tavors are extremely positive, especially distinguished by their high maneuverability and ease of offhand shooting. Their modern and accurate aiming system, attached directly to the barrel, is also highly praised.