Recently Israeli Aerospace industry (IAI) has launched a new electronic warfare system “Scorpio” that can be used from land, sea and air equipment, which can effectively respond to a variety of threats from land, sea and air, and can simultaneously carry out electronic interference for multiple targets in different directions and at different frequencies, achieving a “revolutionary” breakthrough in electronic warfare technology.

In November last year, Israel Aerospace Corporation (IAI) officially announced the successful construction of the new “Scorpio” -G (ground) and “Scorpio” -N (sea surface) systems, the two latest systems born from the “Scorpio” series before the two more complete systems “Scorpio” -SP (self-protection) and the training version “Scorpio” -T. Among them, the “Scorpio” -G is mainly used for air defense operations, which can implement electronic “soft kills” on multiple air targets at the same time, and can achieve mobile deployment based on military carrier vehicles. It also provides 350-degree protection.

“Scorpio”-N is mainly responsible for early monitoring and positioning of some potential targets, effectively warning and countering the attack of targets such as anti-ship missiles and drones. “Scorpio”-SP is mainly carried in the electronic pod, which can carry out electromagnetic interference on the air-ground early warning radar within a certain area and cover the aircraft to perform various air missions. Scorpio-T is mainly used for training evaluation and system testing, simulating a variety of land-based threats, building complex electromagnetic environments, and providing pilots with electronic warfare training conditions.

Like the U.S. Navy’s AN/SLQ-32(V)7 shipboard electronic warfare improvement program, Block III(SEWIP Block III), the latest iteration of the Scorpio system is based on active electronically scanned array technology, which can take advantage of its various advantages to provide a new soft-kill capability for land and sea warfare claimed by Israel Aerospace Corporation (IAI). 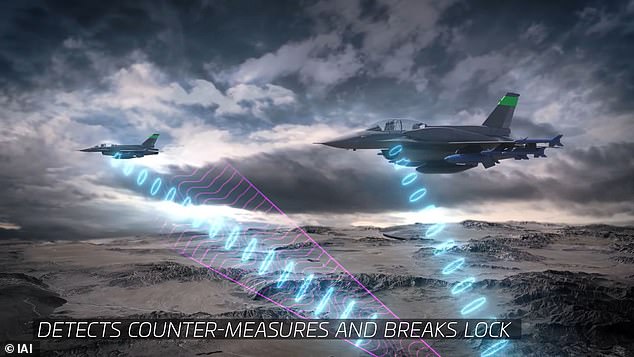 The system is capable of performing highly accurate electronic attacks on multiple targets at the same time, and acts as auxiliary sensors and even communication nodes, that is, to achieve the integration of radar, communications, and electronic warfare. The application of the technology makes the Scorpio system easy to expand, and once the scale of the war expands, the system can provide a circular electronic defense dome on a larger scale, “through which anything, even hundreds of targets, can be detected in dozens of targets in the sky, and can also send a dedicated narrow interference beam to each target.” ”

3. The intelligence has been greatly improved

The system uses the intelligent jamming technology of digital radio frequency memory (DRFM), and the application of DRFM technology improves the performance of a new generation of electronic countermeasure equipment, providing a powerful means for modern radars such as interference Radar Pulse Compression (PC), pulse Doppler (PD) radar, and synthetic aperture radar (SAR). The system is capable of continuously intercepting, tracking, and interfering with almost all types of radar and communications systems, and directly displays electronic battle sequences (EIBs). The jammer is powered by a pre-programmed task definition file (MDF) and can run automatically or under the direct control of the operator. In the future battlefield, protecting one’s own use of the electromagnetic domain and preventing the other side from using the electromagnetic domain has become the key to ensuring that the troops gain an advantage in this field and affecting the outcome of the war. Israel’s “Scorpio” electronic warfare system achieves technical compatibility, providing a direction for the development of electronic warfare systems in other countries.

Source of this article: Bright Military