So far the Chinese Navy carrier strike group consisting of an aircraft carrier, 055 large destroyer is the core, supplemented by two 052C/D destroyers and two 054A frigates. Of course, one nuclear attack submarine (SSKN), and one supply ship accompanying it.

Since 2018, especially after the Type 055 destroyer began its experimental service in 2019, the composition of the Chinese Navy’s aircraft carrier formation has begun to be gradually fixed: the core force includes an aircraft carrier and carrier-based aircraft forces.

So in the future, what kind of organization will the PLA Navy aircraft carrier battle group appear in? we can assume there will be at least 2 heavy 055 destroyers, two 054A frigates, two 052DL destroyers, Two nuclear powered attack submarines, and at least one supply ship.

Judging from the current data, in the future aircraft carrier battle group organization, the core ship aircraft carrier will be a new generation of domestically-made aircraft carriers, equipped with electromagnetic catapults. The take-off and landing capabilities will be greatly. At the same time, there will be a large number of new carrier-based aircraft that could be J-35 (FC-31). 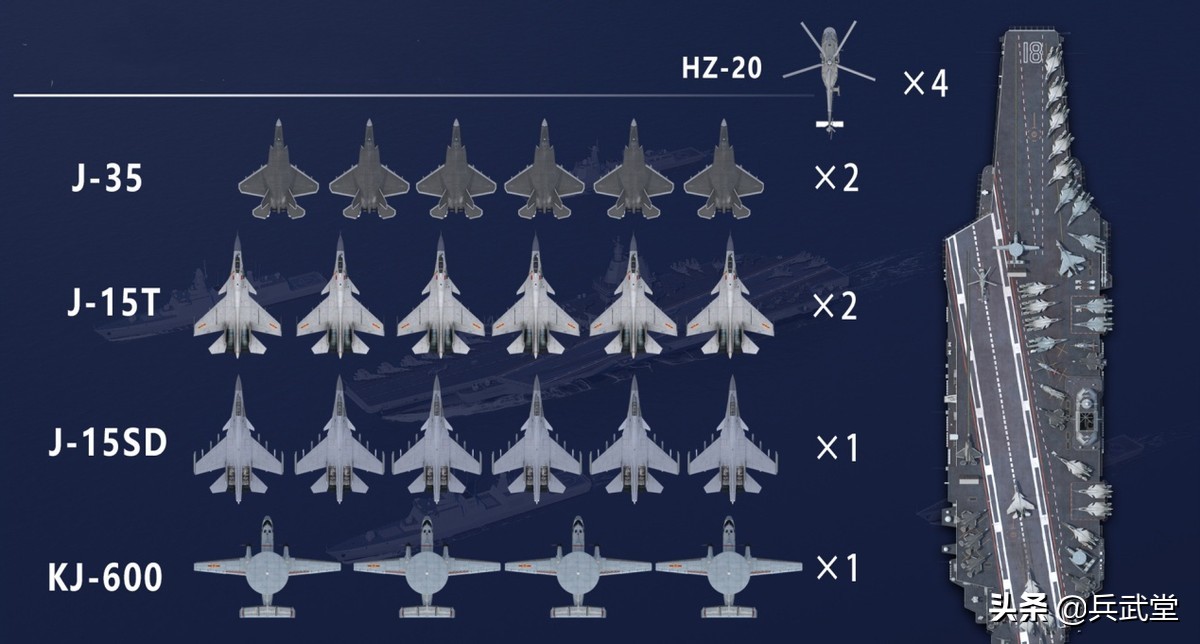 From the perspective of the size of the entire battle group, the current standard 055 and 052D destroyers of the two aircraft carrier fleets already have a sufficient number. These two destroyers will be responsible for long-range area interception, with a distance of 290 kilometers, and can also serve as the command core of the entire aircraft carrier formation if needed. In addition to these two types of destroyers, there is a brand new 054B frigate, which can be responsible for medium-range interception with a range of about 15-70 kilometers. Of course, the 054B frigate has not yet officially appeared. According to Chinese media, the 054B will integrate part of the 052D’s ship electrical equipment and radar sensing capabilities to ensure stable air defense and anti-submarine capabilities at mid-range. Aircraft carrier also has 3-15 kilometers close defense system protection much lower compared to Indian aircraft carrier which has a range of 80km.

As for the key carrier-based aircraft part, there may be at least three types of carrier-based aircraft in the future Chinese aircraft carrier organization. Among them, the J-35 stealth carrier, but there is no sign if China can complete the development of this fighter at time. It is currently speculated that it may be equipped with the J-15T, and some J-15SD electronic warfare versions. The high-profile appearance of the J-15D in this air show shows that this fighter will have a place on the future aircraft carrier. Otherwise, on the basis of the development of the J-35, the J-15D will not be developed separately.

In addition, there are two carrier-based airborne early warning and control, KJ-600. In addition, the Z-20 helicopter naval model will also have a small number of aircraft, which will become a general-purpose service and rescue helicopter for aircraft carriers, which will be very useful. Of course, there are still two Type 095 attack nuclear submarines underwater as an important component of the aircraft carrier formation, but there is generally not much news about the big blackfish. But it is quite sure the future Carrier strike group of PLA Navy will have 1 or 2 Nuclear subamrine.

Generally speaking, the future organization of the Chinese aircraft carrier battle group has basically taken shape. Only the 054B and KJ-600 and Z-20 navy types have not been fully unveiled. However, most of this equipment has been designed and completed except for the 054B.