Russia’s latest generation of main battle tanks T-14 Armata has encountered a bottleneck again, and the mass production time has been forced to postpone!

As a new-generation main battle tank developed by Russia in the 21st century, the T-14 was once considered the only fourth-generation main battle tank in the world. According to the plan of the Russian Army, this tank was originally going to be mass-produced last year and will form considerable combat effectiveness next year. But unfortunately, the T-14 has recently encountered new problems, which have delayed mass production and military time.

It is reported that there are two main reasons hindering the mass production of the T-14: First, many sensors and operating systems of the T-14 main battle tank rely on European and American electronic components, but Europe and the United States now refuse to provide these parts. Second, in the actual test, the T-14’s fire control system still has defects and needs to be further improved and debugged. Regarding when the T-14 can be officially delivered to the Russian army, sources familiar with the Russian tank industry said that due to “technical obstacles”, the mass production of the T-14 “Amata” main battle tank is likely to be postponed to 2024.

The T-14 “Amata” is the fourth-generation Russian main battle tank. The tank has two major characteristics. One is the extensive use of artificial intelligence technology, which improves weapon targeting and shooting accuracy and reduces labor costs. The second is to use an unmanned turret, which greatly enhances the protection capabilities of the crew.

In terms of tank research and development, Russia has always led the trend, and classics have appeared frequently, fully demonstrating its preference and trust in the king of land warfare. With the advancement of science and technology, the Russian army’s tank research and development has also focused more on the latest technological elements. It no longer focuses on tank speed and armor thickness, but puts more emphasis on practicality, and strives to preemptive on the battlefield and kill with one move. Although Western countries are not optimistic about the “Armata” and believe that the tank has no substantial breakthrough and has a poor defense against anti-tank missiles, Russia still has not given up on the development of the tank. On the whole, the tank can be said to fully embody the innovative spirit of the Russian military industry. It is very interesting in terms of design concepts, especially showing that the Russian military attaches great importance to the combat characteristics of the information age.

In fact, the Russian army built “Amata” as an information platform, and then played the role of tanks on this basis. Of course, the tank will continue to introduce improved versions over time. To evaluate its pros and cons from a certain index in general, it may not be objective and fair. Outstanding overall performance is the kingly way. The Russian T-14 “Armata” heavy tank has been tested in Syria before. It is reported that by the end of this year, the first batch of “Almata” tanks may be sent to Syria.

The last task is to test under actual combat conditions, and then the large-scale delivery of these heavy armored vehicles can begin. Test these tanks under actual combat conditions and test the coordinated movements of tank crews. It is understood that the first batch of T-14 “Armata” series tanks have been delivered to the Russian army, and it is planned to start batch delivery of these heavy vehicles next year. Regarding the delivery of T-14 “Armata” tanks to Syria, experts believe that the information provided is likely to be true, because almost all the latest Russian weapons need to be tested in Syria. 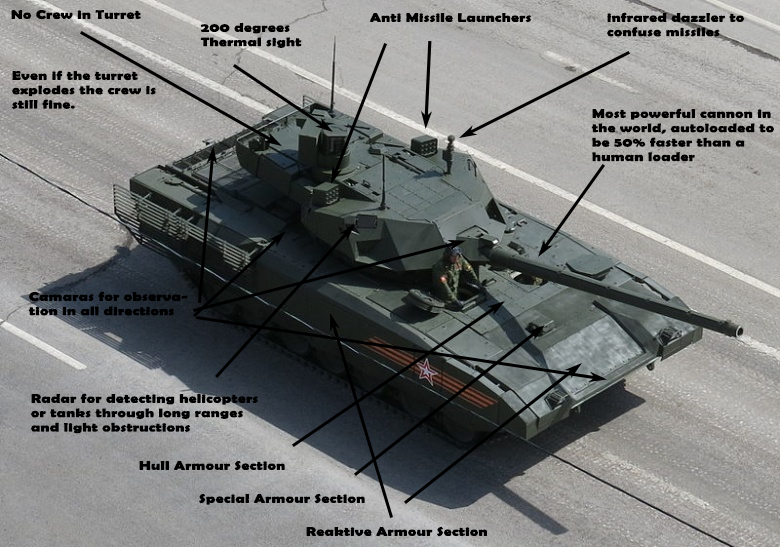 Originally, Russia had an ambitious military purchase plan to acquire more than 2,300 unit. Now this order has been reduced to just over 100. Obviously, Russia is more willing to upgrade the existing old tank equipment, by installing laser rangefinders, fire control systems, infrared vision, and active protection systems to upgrade the existing tanks such as T-90. These upgraded Russian tanks have the ability to fight against Western main battle tanks, so naturally, there is no need to buy too many expensive Armatas. Therefore, the order quantity of Armata may still be in the first three digits in the next 5 years. This quantity is a drop in the bucket for the overall transformation of the Russian armored forces.

However, it is worth noting that the U.S. Army is restarting the unmanned turret version of the “Abrams” program at the end of the Cold War. The “S” turret is smaller: The original intention of the unmanned turret is to reduce the front projection area of ​​the turret and reduce the probability of being hit. However, the turret of the T-14 “Amata” does not seem to be much smaller than the T-90, or even smaller.