Rising tensions between Russia and the West have raised fears of a military conflict involving Ukraine, which is eager to join NATO despite Moscow’s objections.

Rising tensions between Russia and the West have raised fears of a military conflict involving Ukraine, which is eager to join NATO despite Moscow’s objections.

Russia has called on NATO not to expand further eastward. In contrast, the US urged Russia to respect Ukraine’s sovereignty and pledged to retaliate if Moscow continued to act as provocative and aggressive. Not stopping there, Washington also deployed troops to a number of NATO allies in Eastern Europe.

A series of satellite images show Russia’s military presence again near Ukraine’s border, raising fears of a potential attack. Ukrainian President Volodymyr Zelensky then accused Russia of mobilizing 100,000 troops, along with tanks and heavy military equipment in the border area between the two countries. The Pentagon also said it was aware of “unusual activity” and was closely monitoring the situation in the area.

On November 17, Ukraine’s Defense Ministry announced that the country’s armed forces held drills near the border of Crimea, which was annexed by Russia, amid rising tensions in the region.

By the end of the month, Russia denied the reports, accusing Ukraine of increasing troops on its border and demanding legal guarantees that it would never join NATO.

December 7th: US President Joe Biden talks by phone with Russian President Vladimir Putin. The Kremlin boss called on NATO to ensure an end to its expansion to the East. Meanwhile, the President of the White House threatened to impose heavy economic measures if Russia attacked Ukraine.

December 16: The European Union and NATO warn of “terrible strategic consequences” if “the territorial integrity of Ukraine continues to be attacked”.

December 17: Russia makes a proposal to limit the influence of the US and NATO over the countries of the former Soviet Union.

January 2: In a phone call with Ukrainian President Zelensky, Biden pledges that the United States and its allies will act “definitively” if Russia “continues to invade” Ukraine.

January 11: Russia conducts live-fire drills, with the participation of tanks and soldiers, near Ukraine. This is a signal that Moscow is in no hurry to reduce its military presence near the border with the neighboring country.

About 3,000 soldiers and 300 military equipment were deployed in the exercise, including T-72B3 tanks and BMP-2 infantry fighting vehicles, to practice attacking enemy targets at distances up to 1,200 m, move while the enemy attacks and scouts…

January 13: Polish Foreign Minister Zbigniew Rau warns of the risk of war when Russia-Western negotiations over Ukraine tensions fall into a deadlock.

According to the plan, the exercise will take place in western Belarus, near the border with some NATO member countries such as Poland, Lithuania and the southern flank with Ukraine. The drill has content that assumes the Belarusian army has to deal with forces coming from the West. 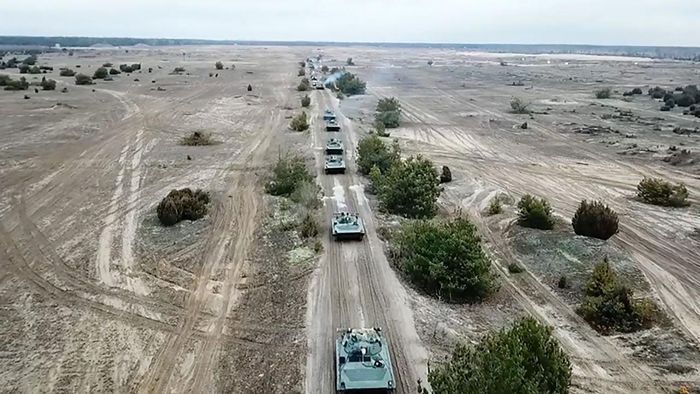 January 19: The US announces an additional $200 million in security assistance to Ukraine.

January 21: Estonia, Latvia and Lithuania announce that they will send anti-tank and anti-aircraft missiles to help Ukraine defend itself. Meanwhile, Russia demanded that NATO withdraw its troops from Romania and Bulgaria.

January 24: NATO announces to put its forces on combat readiness and strengthens its military presence in Eastern Europe with warships and fighter jets to respond to Russia’s military action in the region. Ukrainian border.

The Russian Baltic Fleet (RBF) announced that two Steregushchiy-class warships, Soobrazitelnyy and Stoikiy, have left the port of Baltiysk to participate in large-scale naval exercises scheduled to take place until the end of February.

This is part of a series of large-scale exercises that will be conducted by the Russian Navy until the end of February. The Russian Navy will mobilize more than 140 warships and support ships, about 60 aircraft and 10,000 soldiers for this exercise. .

January 25: Russia conducts drills involving 6,000 troops and at least 60 aircraft near Ukraine and in Crimea.

January 26: The US refuses to close the door of NATO to Ukraine. NATO also considers many of Moscow’s security demands “unacceptable or unrealistic”.

February 2: The US announces the deployment of 2,000 troops to Poland and Germany, as well as sending another 1,000 troops to Romania, prompting a condemnation response from Russia.

February 7: French President Emmanuel Macron arrives in Russia to hold talks with President Putin. Although there was no breakthrough result, the leaders of Russia and France still expressed hope that a solution to the crisis could be found.

After the meeting, Putin said he was ready to compromise and would consider proposals made by his French counterpart Macron. Still, Putin blamed the West for rising tensions over Ukraine. Meanwhile, Mr. Macron said he had made proposals to address the concerns of both Russia and the West. For example, the two sides pledged not to take further military action, conduct a new strategic dialogue and work to restore the peace process related to the conflict between the Ukrainian government and separatist forces in the east. this country.

As revealed by a French official, Russian President Vladimir Putin has promised not to deploy any new military initiatives near Ukraine for the time being, to avoid escalation that could increase the risk. crisis. According to the official, the Russian leader has agreed that the troops participating in the exercise in Belarusian territory near the border with Ukraine will be withdrawn after the exercise ends.

At the White House, President Joe Biden received German Chancellor Olaf Scholz in the context of the two countries’ efforts to find a “united front” in dealing with the scenario of Russia “attacking” Ukraine. Scholz said after meeting Biden that Russia would “pay a very heavy price if it attacked Ukraine”. However, the leader also emphasized the ongoing and upcoming diplomatic efforts, including the four-way talks between Germany, France, Ukraine and Russia.

Disagreement over the Nord Stream 2 gas pipeline route could threaten the “unified front” of the US – Germany. At a joint press conference with Mr. Scholz, President Biden vowed to “terminate” this gas pipeline from Russia to Germany if Moscow “invades” Kiev. Meanwhile, Mr. Scholz refused to commit to ending it if Russia attacked Ukraine.

February 8: German Chancellor Olaf Scholz, French President Emmanuel Macron and Polish President Andrzej Duda meet in Berlin to discuss the crisis in Ukraine. Speaking at a joint press conference afterward, Prime Minister Scholz emphasized that they agreed on the goal of maintaining peace in Europe through diplomacy and clear messages and a willingness to act together.

The Russian Defense Ministry said the six ships were heading from the Mediterranean to the Black Sea to participate in “pre-planned” naval exercises. In January, Russia announced that its navy would conduct a series of exercises involving all fleets in January and February. The location of the exercises ranges from the Pacific Ocean to the Atlantic Ocean.

On the same day, February 8, Russia also confirmed the start of naval exercises in the southern region. 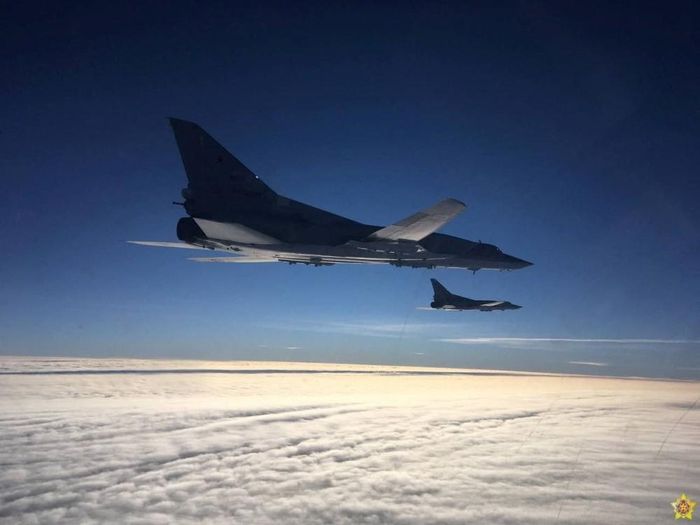 February 10: Russia and Belarus begin the Union Resolve 2022 exercise, closely watched by the US and Europe. The drills, scheduled to last from February 10 to 20 in Belarus, focus on “suppressing and repelling foreign aggression,” according to a statement from the Russian Defense Ministry. “The operation is centered on the scenario of suppressing and repelling foreign aggressive forces in a defensive operation, as well as fighting terrorism and protecting the interests of the allied state,” the Russian Defense Ministry said in a statement.

In Crimea, Maxar Technologies said Russia has deployed troops and new equipment at Oktyabrskoye airport, north of Simferopol, including 550 tents and hundreds of military vehicles. New troops and equipment were also deployed near Novoozernoye in Crimea.

President Putin wants the US to “taste bitter medicine”?

Fiona Hill, a member of the National Security Council under President Donald Trump, has just published an article in The New York Times, in which Russian President Vladimir Putin has long viewed efforts to bring Ukraine and Georgia closer. NATO rather than a provocative step, which could lead to pre-emptive military action from Moscow.

Shortly before the NATO Summit in Romania in April 2008, NATO announced that Ukraine and Georgia would eventually join the alliance. Mr. Putin immediately had a strong reaction when he met President George W. Bush at the conference.

Four months later, Russia “attacked” Georgia and Kiev received this strong message from Moscow. A few years later, Ukraine delayed its intention to join NATO. However, by 2014, Ukraine wanted to sign an association agreement with the European Union, thinking it was a safer way to get closer to the West. According to the author, Moscow then continued to act: accusing Kiev of looking for a back door to join NATO, annexing Crimea from Ukraine…

The silent Western reaction to the two events above 2008 and 2014 spurred Mr. Putin to pursue a larger goal. This time, the Russian leader also wants to “expel” the US from Europe.

Author Fiona Hill said that Putin’s choice of action and at any time has a purpose. December 2021 marks the 30th anniversary of the dissolution of the Soviet Union, the time when Russia lost its dominant position in Europe. Therefore, Mr. Putin wants to give the US “a bitter taste of the pill that Russia had to take in the 1990s”.