In the event that the Ukrainian Army tries to attack the Donbass or Russian territory, the Russian side will have complete superiority over the Ukrainian army; this has been described by the western media.

The deployment positions of Russian forces relatively close to the Ukrainian border have been marked on the map. Judging by the information provided by the Western media, there will be no chance for the Ukrainian Army to be able to oppose the Russian Army, in the event of Kiev aggression. 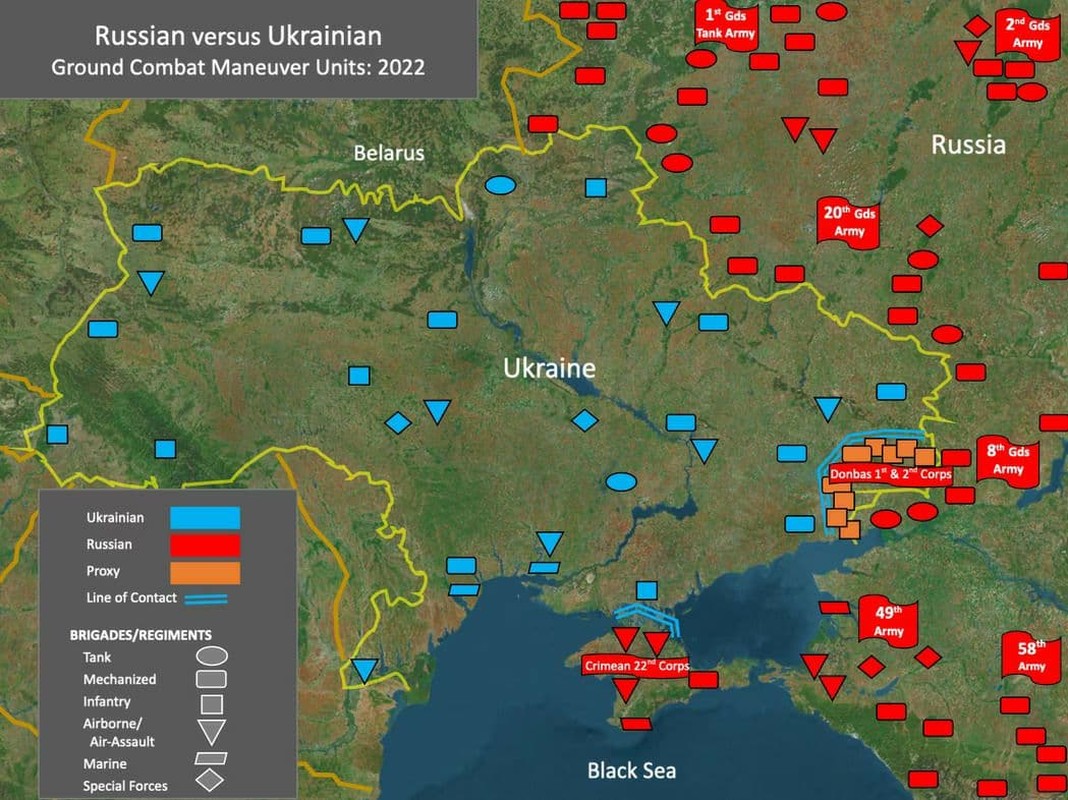 On the map published by the Western media, viewers can see the deployment positions of ground, sea, and air forces of the Russian Army as well as the Ukrainian Army.

The obvious superiority of the Russian military, most concentrated in the area near the Ukrainian border, speaks for itself; but according to the Russian side’s assertion, they only protecting their borders and are not at all “aggressive” with Ukraine, despite accusations from Kiev and NATO.

However, Moscow also affirmed that Russia can send troops into the Donbass to protect Russian citizens in this area, if Ukraine intends to aggressively attack the two self-proclaimed republics of Donetsk (DPR) and Lugansk (LPR). There are many Russians living in Donbass.

Russian media reported: “Currently, Russia is pressuring Kiev for a lasting peaceful solution to the problem in Donbass; the immediate future is to strictly observe the Minsk Agreements signed in 2015.

It should be emphasized that the Russian Army is on Russian territory; Therefore, any argument from Kiev and NATO countries that Russia is preparing an attack on Ukraine, is not true, if Ukraine intentionally attacks Russian citizens in the territory of the DPR and LPR. then Russia will take action- said bu Russian media.

In terms of combat characteristics, the main battle tank and light anti-tank weapon (MBT LAW), also known as the NLAW, is a short-range, disposable, unguided anti-tank missile system developed by the United Kingdom and Sweden cooperation.

The Main Battle Tank and Light Anti-tank Weapon (MBT LAW), also known as the NLAW, is a joint British and Swedish short-range fire-and-forget anti-tank missile system. Designed for use by infantry, the MBT LAW is shoulder fired and disposable, firing once before being disposed of. It is currently in use with the military forces of the United Kingdom, Finland, Luxembourg, and Sweden, among others.

The NLAW though is a light, disposable anti-tank weapon; but they can destroy the main battle tank T-72, if it hits a critical spot; In addition, it can also destroy bunkers and fire points. With this large batch of weapons, it will be a great threat to the militias of the self-proclaimed republics.

Russian media, citing Telegram channel, said: “We counted the pallets in a C-17 with 12 shelves, in a shelf with 18 NLAW combinations; a total of 216 combinations and 5 C-17s aircraft, equivalent to 1,080 NLAW guns.

Given this situation, it is very likely that in the near future a new armed conflict will break out in the Donbass; According to representatives of the DPR, large formations of the Ukrainian Army are intending to occupy the Maryinka area, where armored vehicles are only a few hundred meters from the line of sight.

Russia has not yet commented on the transfer of British NLAW light anti-tank weapons to the Ukrainian Army; however, in response, Russia will massively aid the militia with other anti-tank weapons similar to the NLAW, but much more powerful like the RPO-A Shmel, to the militia.