The small anti-aircraft guns of the Imperial Japanese Army, although quite effective, were not enough in number to be able to stop the swarm of American bombers. One of the reasons Japan heavy loss during WW2

The most common Japanese anti-aircraft gun during World War II was the Type 98 20mm automatic cannon. The system was developed as a dual-use weapon, both against light armored vehicles and against aircraft operating at low altitudes.

The Type 98 automatic cannon, which entered service in 1938, was designed on the basis of a copy of the 13.2 mm Hotchkiss М1929 machine gun that Japan purchased a production license from France. For the first time, the Type 98 anti-aircraft gun entered the war in 1939, at the Battle of the Khalkhin-Gol River with the Soviet Union.

The total weight of the cannon (including the wooden wheels) was 373 kg; The cannon can be pulled by horse-drawn carriage or light truck at speeds up to 15 km/h. When in a combat position, the Type 98 is equipped on a tripod. The cannon has a 360° turret, a range of -5° to + 85°.

The reloading mechanism of the Type 98 was with a 20-round magazine, the theoretical rate of fire was from 280-300 rounds/minute. Combat rate of fire 120 rounds/min. The maximum range was around 5.3 km, but the effective range was only half that; The air-space altitude was about 1,500 m.

In 1942, Japan developed the 20mm Type 2 anti-aircraft gun on the basis of the German 2.0 cm Flak 38 low-altitude anti-aircraft gun. This type of artillery was part of the German-Japanese military cooperation program. The only difference was the Type 2 was adjusted to fit the Japanese 20mm ammunition, to save money on ammunition production.

The Type 2 was a much more advanced gun than the Type 98; cannons have high reliability and rate of fire. The mass of the Type 2 in the fighting position was 460 kg, the rate of fire was up to 480 rounds/minute. The firing direction and range corresponded to the Type 98, but the effectiveness of anti-aircraft fire was significantly increased.

The Japanese 20mm anti-aircraft gun mainly serves the regiment and divisional army air defense units. They were used by the Japanese military not only against Allied aircraft, but also actively used in all land battles against armored vehicles.

The most famous and popular Japanese rapid-fire anti-aircraft gun was the 25 mm Type 96, which was produced in single, double, and triple versions. It was the main light anti-aircraft weapon of the Japanese Navy and it was very actively used in ground air defense units.

The Type 96 was developed in 1936, on the basis of the Mitrailleuse de 25 mm anti-aircraft gun, produced by the French company Hotchkiss.

The main difference between the Japanese version and the original was that it was equipped with some technology of the German company Rheinmetall with a barrel lock and some differences in the reverse brake mechanism.

In terms of effectiveness, the 25mm shell was significantly superior to the Type-98 and Type-2 20mm anti-aircraft artillery shells. At a range of 200 meters, a Type 96 armor-piercing shell can penetrate  30mm thickness of armor with a 90° angle of impact. It only takes 2-3 25mm armor-piercing shells or 1-2 explosive shells to shoot down a single-engine fighter.

The 25mm anti-aircraft gun was widely used in the navy and army, but the structure has many shortcomings, especially the ammunition is loaded with a 15-round box, not with a wire, so the rate of fire was very low. But in the 1930s, the Japanese did not have basic weapons design centers, and they chose to copy the French model. 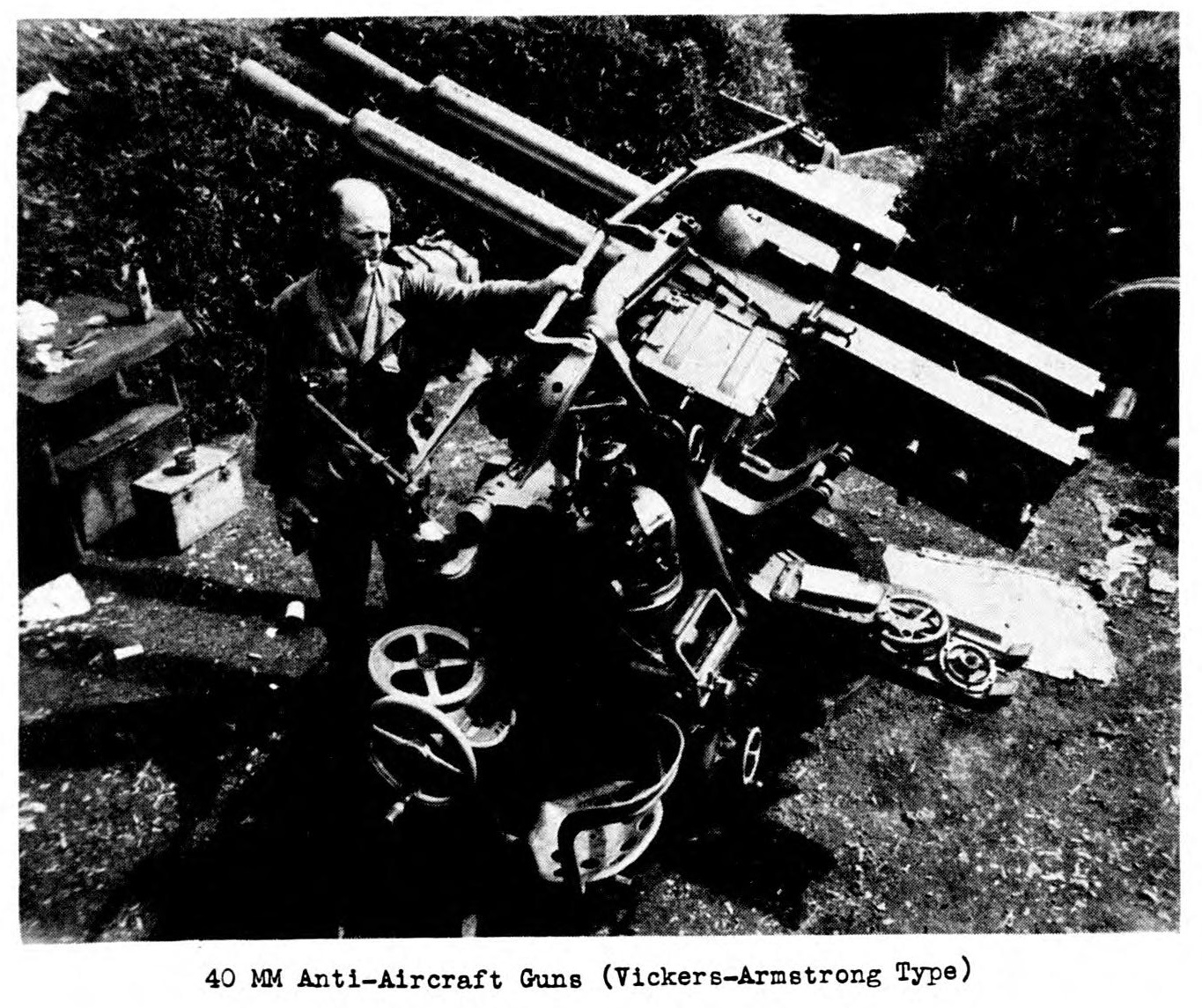 In the late 1920s, the Vickers was an advanced anti-aircraft gun; but by the beginning of World War II, it was obsolete. The reason is that the 40x158R bullet is too weak, the 40 mm warhead weight was 900 g leaving the barrel with a speed of 600 m/s, while the effective range at aerial targets, moving should not exceed 100 m / s.

Because of their outdated 40mm anti-aircraft guns, which did not have enough anti-aircraft altitude, they posed no particular threat to the four-engine B-29 bombers, even when they were fly lowered to bombs.

During the 1930s and 1940s, the 40 mm Bofors L/60 was the most powerful anti-aircraft gun of its class. Bofors L/60 can destroy targets at altitudes up to 3,800 m and the range was up to 4,500 m. Because the Japanese Army desperately needed fast-firing anti-aircraft guns, it was decided to copy and start mass production in early 1943 of the Bofors L/60 version as Type 5.

However, due to copied production, there were no technical drawings, so the quality of Japanese Type 5 cannons produced was very low. Due to the unsatisfactory reliability of the Type 5 cannon and the low production volume, it didn’t affect the allied force aircraft.

The Vickers 40mm anti-aircraft guns bought from the UK were clearly obsolete in the late 1930s. And they cannot be considered an effective means of air defense. The Japanese captured a handful of the very perfect Dutch and British Bofors L/60 40 mm guns, but they failed to replicate the Type 5 to an acceptable level.