uring an interview with  China Central Television (CCTV) state news broadcaster, flying instructor under the Chinese People’s Liberation Army (PLA) Northern Theater Command Air Force Wang Songxi gave insights into the capabilities of two of the world’s most capable fourth generation fighters the J-16 and J-10C. Having flown the J-16 extensively, Wang claimed the fighter was a near perfect design “superior to all types of aircraft I have flown,” praising its all weather capabilities, versatility provided by a very wide array of weapons and its advanced onboard avionics. Comparing the J-16 to the J-10C he stated that the two aircraft were almost evenly matched – but that the J-16 had the advantage of twin engines and a second pilot. A closer look at the two fighters, which are both in serial production in China today alongside the larger J-20 stealth platform, gives indications as to the advantages and drawbacks of both designs relative to one another. 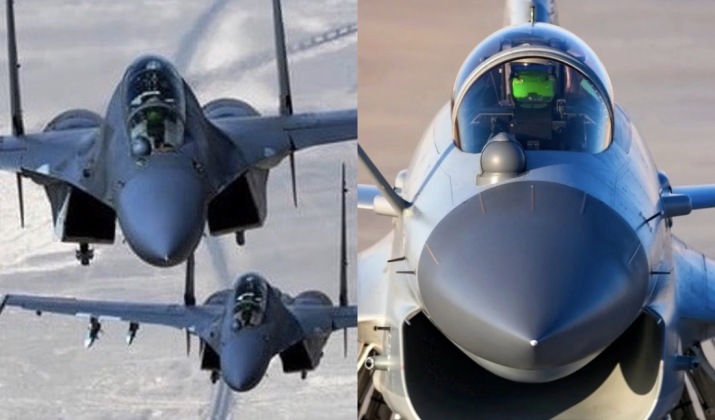 The J-10C is a lightweight ‘4++ generation’ fighter which has served with the PLA Air Force since the spring of 2018, and has been produced on a very large scale with over 200 estimated to be service. The aircraft is a single engine lightweight design, meaning it carries a relatively small radar and low weapons payload and has a relatively short range, but has a low operational cost and low maintenance requirements which allow it to be fielded in large numbers. The fighter benefits from a three dimensional thrust vectoring engine – the only one outside Russia to do so – which provides it with extremely high manoeuvrability particularly at low speeds. This complements its already very high thrust/weight ratio, and compared to its closest competitor the American F-16 the J-10C is not only much lighter due to a newer airframe design but also integrates a much more powerful engine. In terms of its weight, the J-16 ‘4+ generation’ fighter is at the opposite end of the spectrum among fourth generation fighters as a heavyweight aircraft. Although relatively costly to operate, it benefits from a high endurance meaning it can carry a large weapons payload over long distances and cover a very wide area from its airbase. The fighter was the first in Chinese service to make use of AESA radar technologies, and entered service in the PLA Air Force from 2013. Produced on a smaller scale than the J-10C, as is the norm for heavyweight aircraft, it is estimated that over 150 of the fighters have left production lines. The J-16’s  airframe is based on the Soviet Su-27 Flanker design, which had the best flight performance for a late-Cold War era fighter, but the Chinese aircraft improves on the design considerably with new composite materials and engines. The J-16 builds on decades of Chinese experience operating and manufacturing Su-27 derived fighters, including among other the J-11A, J-11B and J-15 which provided stepping stones to further refining the design. The J-10C and J-16 have many significant similarities. Both make use of advanced next generation avionics, electronic warfare systems, composite materials and AESA radars based on similar technologies. The WS-10B engine powers both fighters, although the J-16 uses it in a twin configuration providing double the power due to its much larger size. Both make use of the same PL-15 and PL-10 air to air missiles, which are also used by the J-20 and provide China’s latest fighters with a distinct advantage over those of rival powers such as Russia and Japan which lack comparable advanced munitions. The PL-15 makes use of an AESA radar – the only air to air missile outside Japan confirmed to do so – and has a very long engagement range estimated at between 250km and 300km. The PL-10 is prized for its short range capabilities and is capable of cueing with helmet mounted sights to engage targets at very extreme angles. For long range engagements, the J-10C and J-16 are two of the world’s only fourth generation fighters to use radar absorbent stealth coatings – a field in which China has invested heavily in research and development. Comparing the two aircraft, the J-10C has the advantages of easier maintenance and a lower operational cost which make it suitable for deployment in large numbers. It is also more manoeuvrable particularly at lower speeds and has a lower radar cross section. Newer variants of the J-16 make use of similarly advanced avionics and electronic warfare systems to the J-10C, and the aircraft can operate at similar high altitudes and are slightly faster. The J-16 has the advantage of a higher endurance, more firepower, and a larger radar which translate to superior situational awareness assuming the AESA radars used by both fighters are similarly sophisticated. The J-16 may also be more manoeuvrable at high speeds. The J-16’s twin engines make it more durable and more difficult to destroy – as twin engine fighters often lose only a single engine when attacked and can return to base for repairs with just one intact. Its twin seat configuration is also better suited to strike and anti shipping roles in particular – allowing the weapons systems officer in the second seat to target weapons against adversaries on the ground and at sea while the pilot tackles enemy aircraft and flies the plane. This advantage may diminish as artificial intelligence increasingly provides pilots of single engine fighters with the ability to do more simultaneously. Overall the J-16 is a superior fighter, despite being less dangerous at close ranges, but this is balanced out and arguably more than compensated for by its higher maintenance needs and operational costs – with the J-10C able to at least hold its own and only suffering major disadvantages in terms of range and endurance. By fielding the two aircraft together, and deploying them to elite squadrons alongside the J-20, the Chinese People’s Liberation Army Air Force can benefit from their highly complementary capabilities for a more dangerous force.