Israel’s Achzarit heavy armored personnel carrier based on the platform of  T-54/55 medium tank, those captured from Arab armies during Arab-Israel wars.

Israel is a master at converting spoils obtained from the enemy, Achzarit is one of them, this is a line of heavy armored personnel carriers converted from T-54/55 tanks.

During the war with Arab countries in 1967, Israel captured a very large number of T-54/55 main tanks that the Soviet Union supplied to the Arab bloc, immediately Israel deployed them with The name is Tiran.

Realizing that the original 100mm D-10T2S cannon on the T-54/55 battle tank was not powerful enough, they replaced it with the Western standard 105mm M68 cannon at that time.

By the early 1990s, the Tiran tanks had become obsolete, but instead of melting down the materials, Israel took the surprising step of removing the cannons, redesigning the interior to turn the tanks T-54/55 into an armored personnel carrier called Achzarit.

Currently, there are about 100 Achzarit armored carrier vehicles in service with the Israeli defence force.

Achzarit has been enhanced with protective armor, changed the design of the frame with a landing door behind the vehicle.

The Achzarit armored vehicle can carry 7 soldiers with full equipment and a crew of 3, including the driver, gunner and commander in charge of combat communications.

The weapon system on APC Achzarit is quite simple, including 1 to 2 7.62mm caliber machine guns.

When necessary, the vehicle can also be fitted with a 12.7mm heavy machine gun or a grenade launcher.

With the removal of the turret, the vehicle weight only 30 tons, but when put on the multi-purpose armor, it increases significantly.

With a total weight of 44 tons, Achzarit is listed as a super-heavy armored personnel carrier, while competitors in the world only weight from 15-25 tons. Despite its heavyweight, the vehicle’s protection is among the best in the world

Even 100mm tank shells are hard to destroy this armored vehicle, let alone the 30mm cannons. Most armored personnel carriers can only withstand 25/30mm cannon.

Having good protection is due to the Achzarit is made up of T-54/55 tank armor with composite armor weighing 14 tons. For maneuverability, the car is equipped with an 8V-92TA engine with a capacity of 710 horsepower along with an Allison XTG-411-5A automatic transmission that helps the car to run at a speed of 65km/h and a range of about 550km. 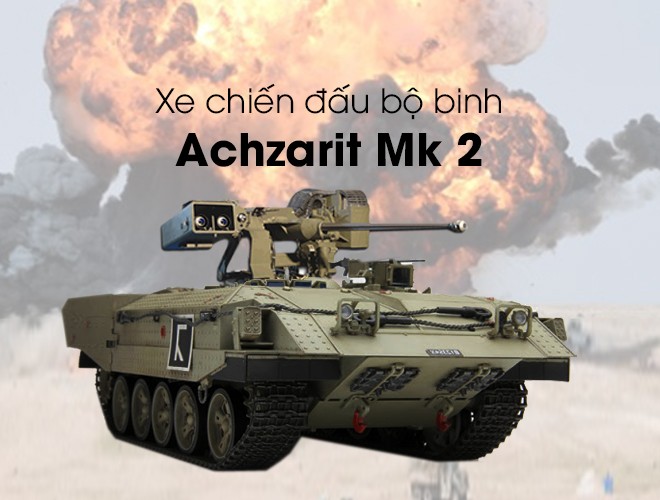 It can be said that the Achzarit is one of the very few armored personnel carriers with the best armor in the world today. Israel is currently working on a plan to install 30mm cannons and anti-tank missiles to turn them into heavy infantry fighting vehicles.