The US media believes that the B-21 stealth bomber is the ideal vehicle to lay mines to deter China.

United States Secretary of the Air Force Kendall, in a recent interview with the media, said that the US Air Force has tried its best to find funding for the stealthy strategic bomber program B- 21 Raider, the backbone of America’s future strategic bomber.

US media on November 17 quoted General Kendall as emphasizing that the B-21 stealth bomber can not only perform nuclear and conventional bombing missions but also act as an airborne command vehicle for UAVs. B-21 acting as a mothership could control multiple drones attacking several targets over a wide area simultaneously, overwhelming an adversary’s ability to counter them.

With high stealth features, General Kendall said that the B-21 can deploy advanced intelligent mines to the Taiwan Strait in the event of a conflict, “under the nose” of the S-400 air defense system and Chinese HQ air defense systems. B-21 to act as a stealthy minelayer, swooping in to drop sea mines at the start of a conflict. Quickstrike is a strap-on kit for 500, 1,000, and 2,000-pound aircraft bombs, fitting them with glide fins and a GPS guidance system. Upon release at 35,000 feet, a Quickstrike ER naval mine can glide for up to 40 miles, splashing down into the ocean and then waiting for enemy ships to pass by.

General Kendall also said that the US Air Force is currently conducting many advanced weapons procurement programs at the same time, causing serious funding difficulties. He called on Congress to approve more funding for the Air Force.

To demonstrate the importance of these advanced US Air Force weapons, General Kendall has sampled the new generation B-21 stealth bomber as an example of its ability, it is able to overcome all existing air defense systems of US adversaries.

The Air Force plans to buy at least 100 new stealth bombers and has made noise that it would really like up to 220. The B-21 will replace the B-1B Lancer and B-2A Spirit bombers in the conventional and nuclear bomber missions.

According to the information, it is possible that the B-21 program can convince Congress to allocate more funds, since the B-21 can not only go in and out of enemy territory, to carry out bombing missions. without being detected; It can also act as an airborne command post for UAVs.

According to information, General Kendall does not want the B-21 to act as a UAV carrier to launch UAVs from the air; But he thinks that the UAV will perform the task with the B-21 and will take command of these UAVs from the air and they will both take off from the ground, Like a mother ship. 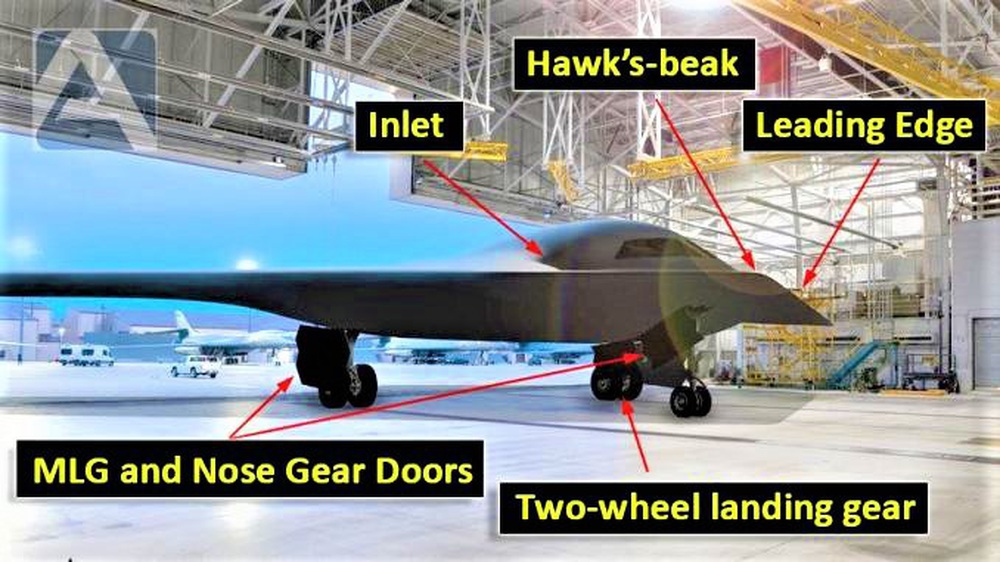 General Kendall said: “If the drone were to be dropped in the air by the B-21, it would take up precious space and payload. If the UAV takes off from the ground with the weapon, it can increase the overall firepower of the whole squadron. One B-21, which can control multiple UAVs, simultaneously attack multiple targets, in a large range, overwhelming the enemy’s counter-attack ability.”

This is just one of the reasons the US Air Force is providing funding to build more B-21s. According to information, another task that B-21 can perform, is to act as an invisible minelaying vehicle, which can silently drop smart mines from high altitudes.

As a stealthy minelayer, the B-21 can go places other planes cannot and establish minefields closer to enemy territory to blockade enemy navy, close ports and waterways, even using modern smart mines to ambush and attack opponents with precision.

It is worth noting that in recent years, the US Air Force’s strategic bombers regularly conduct large-scale aerial mine-laying exercises.

For example, in 2019, Russian media warned that American bombers had approached Russia’s borders several times, and in March of that year they were most likely practicing aerial minelaying.

According to information, US bombers are now equipped with “fast-attack, long-range precision-guided mines”, which can be called special weapons, to block the sea lanes of ships, from enemy naval bases.

This type of mine works on the principle of magnetism, water pressure and sound waves; at the same time can determine the intended attack target through a comprehensive range of indicators including acoustics, magnetic fields and other characteristics; while avoiding conventional demining methods.

Since these mines are easy to make, easy to deploy, but extremely difficult to defuse, the best way to deal with them is to destroy the airborne deployment vehicle carrying them before releasing them. Russian media admitted, if the US military used stealth bombers to carry out aerial minelaying, it would be much more difficult to deal with.

Of course, whether the B-21 can “closely fly freely” without fear of China’s anti-stealth radar and air defense systems as the US Air Force secretary claims is another matter. But anyway, this is not very “happy” news for the Chinese Army.