Last year, Ukraine began testing a promising anti-ship missile “Neptune”. Recently it became known about the next test launch, which should bring closer the moment of acceptance of the rocket into service. The coastal complex RK-360 with such a missile should become the most important military-political tool and increase the combat capability of the Ukrainian army. However, it is not yet entirely clear whether the rocket will be able to justify the hopes placed on it.

Project “Neptune” can be considered a typical “long-term construction” characteristic of the Ukrainian military industry. The first proposals to create a promising anti-ship missile system were made back in the nineties. The project in its current form was proposed in 2010, but real work began only at the end of 2014. 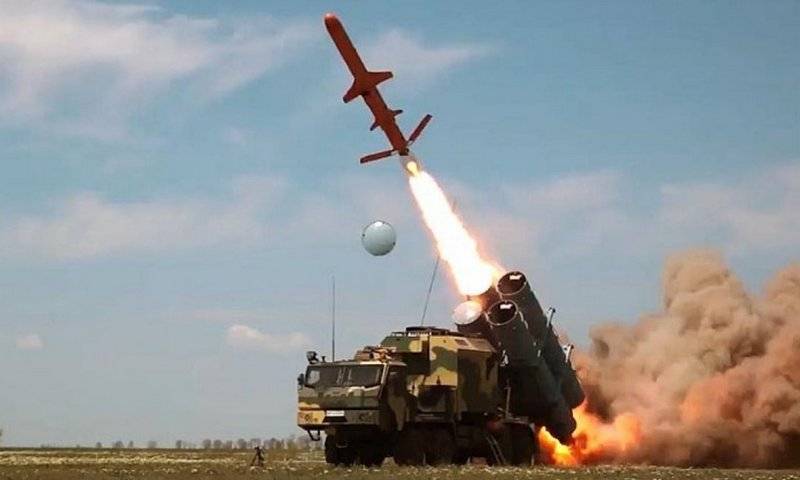 In 2015, the Luch State Design Bureau presented materials for the Neptune product for the first time. In the spring of 2016, a model of the rocket was built in a simplified configuration – it did not have a power plant and main electronic equipment. Already at this stage it became clear that the new Ukrainian product R-360 “Neptune” is in essence a modification of the old Soviet missile Kh-35, redesigned for the capabilities of the Ukrainian industry.

In January 2018, missile throw tests took place at the Alibey training ground (Odessa region). The first full-fledged launch with verification of the operation of the equipment was carried out on December 5, 2018.The next flight took place on April 5, 2019. It was argued that during these tests, the experienced anti-ship missiles passed the required route and hit the intended training targets.

On May 24, performed the next test launch of the missile with the new seeker. On November 28, another flight took place in the standard configuration. GKKB “Luch” claims that the development of “Neptune” as an aircraft has been completed. Now the issues of improving the characteristics, as well as putting the complex into service, can be solved.

Despite the reported successes, the state of the Neptune project is not encouraging. About five years were spent on the processing of the original X-35 project, taking into account the production capabilities of Ukraine, as well as on subsequent tests and fine-tuning. How quickly it will be possible to complete the following work (and whether it will succeed) is a big question.

Thus, the Neptune missile system as a combat-ready and ready-to-use product is not yet available. Against the background of the April tests, the Ukrainian leadership argued that the anti-ship missile system would enter service by the end of the year. In November, it was claimed that state tests would be completed this year. It is unlikely that in such a time frame it will be possible to complete the required work and prepare a full-fledged combat-ready missile system for production.

By now, all the basic data on the RK-360 “Neptune” complex are known, which makes it possible to determine its strengths and weaknesses, as well as draw conclusions about the combat potential, benefits for the army and the ability to influence the international military-political situation.

In the presented form “Neptune” is a coastal missile system consisting of several vehicles on an automobile chassis. The complex includes an R-360 rocket, a launcher on the KrAZ-7634NE chassis, a control vehicle, as well as a transport and loading vehicle. Earlier, the possibility of creating ship and aviation versions of the complex was mentioned.

The main task of the missile system is to defeat surface targets, however, the possibility of working on coastal targets has been declared. In particular, some hotheads have already argued that with the help of Neptune, the Ukrainian army will be able to threaten the Russian Black Sea Fleet and the recently built Crimean Bridge.

As a development of the existing Kh-35 missile, the Ukrainian product R-360 retains its main features and principles of operation. Also, similar tactical and technical characteristics were obtained. The missile is equipped with a turbojet propulsion engine, an active radar homing head, and a penetrating warhead.

The declared flight range is 300 km. while the flight speed is 0.85 mach. With its own weight of 870 kg, the rocket can carry 150-kg warhead. The existing version of the missile system has a self-propelled launcher with 4 transport and launch containers for R-360 products.

It is curious that the main positive features of the Neptune project are associated exclusively with the very fact of its existence. The Ukrainian industry, despite the known problems, continues to develop its first “own” anti-ship missile system, which gives cause for pride. The adoption of the rocket into service is associated not only with the combat capability of the army, but also with national prestige.

The technical side of the Neptune project does not give much reason for pride or optimism. The R-360 rocket is based on far from the newest project, which imposes significant restrictions. In addition, new components had to be developed for it – according to various sources, some of the key units for the rocket still need to be fine-tuned.

When completed, the Neptune anti-ship missile system may have several positive features. The mobile version of the coastal complex allows you to quickly deploy it in dangerous areas and attack enemy ship formations. The theoretical possibility of adapting the R-360 to different carriers (similar to the basic X-35) will expand the range of tasks to be solved. The marching part of the flight is carried out at low altitude, which increases the likelihood of a successful breakthrough of air defense and delivery of a warhead to the target. ARGSN is capable of providing effective target search and successful targeting.

The declared flight characteristics may be insufficient for effective combat work. So, subsonic speed can make the missile more vulnerable to shipborne air defense. To effectively break through the defense, a massive launch may be required, which requires the simultaneous use of several batteries with a set of launchers. As a result, there are new requirements for the production and deployment of complexes.

Ukrainian anti-ship missile “Neptune” in its final form should have characteristics and capabilities at the level of the basic sample in the form of X-35. Such achievements could be cause for pride – if the two missiles were not separated by several decades. In fact, only now Ukraine was able to repeat the Soviet product of the early eighties, even with a change in some components.

The Neptune missile system is being created not only to raise national prestige, but also to solve political problems. It has been talked about more than once as a tool to contain “Russian aggression.” However, in recent years, the Ukrainian army and industry have hardly used other formulations.

It must be admitted that Russia should pay attention to the Neptune project. In the foreseeable future, a new missile system with a certain potential and posing some threat may appear at the disposal of an unfriendly neighboring state. This fact must be taken into account in military planning and construction.

In theory, the Neptune complexes can be deployed along the entire Azov and the Black Sea coasts of Ukraine. In combination with a firing range of up to 300 km, this will make it possible to keep under control large areas of the two seas and attack surface (allegedly also ground) targets.

However, Ukrainian missiles should not be overestimated. They, of course, are going to be put into service, but one should not expect that Ukraine will be able, within a reasonable time, to build a large number of complexes and missiles necessary to block the main water areas. In recent years, many bold and important Ukrainian projects have faced problems in terms of financing and production, due to which they did not give all the desired results.

Tactical and technical characteristics and origin sharply reduce the danger of “Neptune”. The R-360 missile is made subsonic, which limits its combat potential and simplifies interception. In addition, it is based on the Soviet X-35, and the Russian military can easily identify effective countermeasures.

The very fact of developing the first own anti-ship missile and a coastal complex for it can be a reason for the pride of the Ukrainian industry – despite the previous and expected difficulties. Otherwise, there are no reasons for optimism and positive assessments.

In fact, a slightly modernized version of a fairly old rocket has been developed. Its characteristics are limited, but their obtaining is associated with technical difficulties. The construction and deployment of such weapons require special expenditures, which can be prohibitive for the current military budget of Ukraine. Finally, the opeartional version does not pose a particular danger to Russia.

It will be extremely difficult to break into the international market. Developed countries have long divided the market of anti-ship missiles and coastal complexes, and they are unlikely to give up their positions without a fight. In addition, one should not forget about Ukraine’s reputation as an arms supplier, which has been damaged in recent years.

The Ukrainian “Neptune” is a reason for Kiev’s pride, but does not become a reason for Moscow’s particular concern. It is necessary to take into account the presence of such weapons and take the necessary measures, but nothing more. The Black Sea Fleet and other troops in the region have all the means to counter the new missile “threat” and will be able to successfully resist it. If, of course, the R-360 missile can go beyond the range and get into the army.