Sea Breaker provides surgical, pin-point precision strikes from stand-off ranges of up to 300 km. It features an advanced IIR (Imaging Infra-Red) seeker, ideal for engagement of maritime and land targets, stationary or moving, in advanced Anti Access/Area Denial (A2/AD) arenas, and in littoral or brown water, including archipelago, as well as for engagements in which previous generation RF-seeker-based missiles are not effective.

Sea Breaker can be launched from naval platforms, varying in size, from fast attack missile boats, to corvettes and frigates. The land version is a central part of the shore defense, based on Rafael’s highly mobile SPYDER launchers. The battery architecture supports standalone launchers, or operation as an integrated solution, with a command and control Unit (CCU) and various sensors, based on customer requirements.

The Missile tail of “Sea Breaker” has a cylindrical shape, which helps to reduce air resistance while reducing radar reflection area; rockets use irregular cruciform rudders; two lift wings spread out, when the rocket leaves the launch pad. The missile’s air intake is designed to be recessed under the missile’s body, to improve its shape and stealth.

In terms of combat block, “Sea Breaker” is equipped with a multi-function penetrating/explosive/fragmentary warhead with a weight of 113 kg, and its destructive power is enough to destroy a frigate.

Rafael’s “Sea Breaker” missile is a multi-domain weapon that supports a new concept of land and sea warfare; Simultaneously with the sharing of the launcher with the SPYDER missile, this means that the anti-aircraft missile, can be deployed on the same launcher with the cruise missile.

The cruise missile “Sea Breaker”, which will be fitted on Israel’s latest SAAR 6 destroyer, contributes to Israel’s strength and deterrence in the eastern Mediterranean. 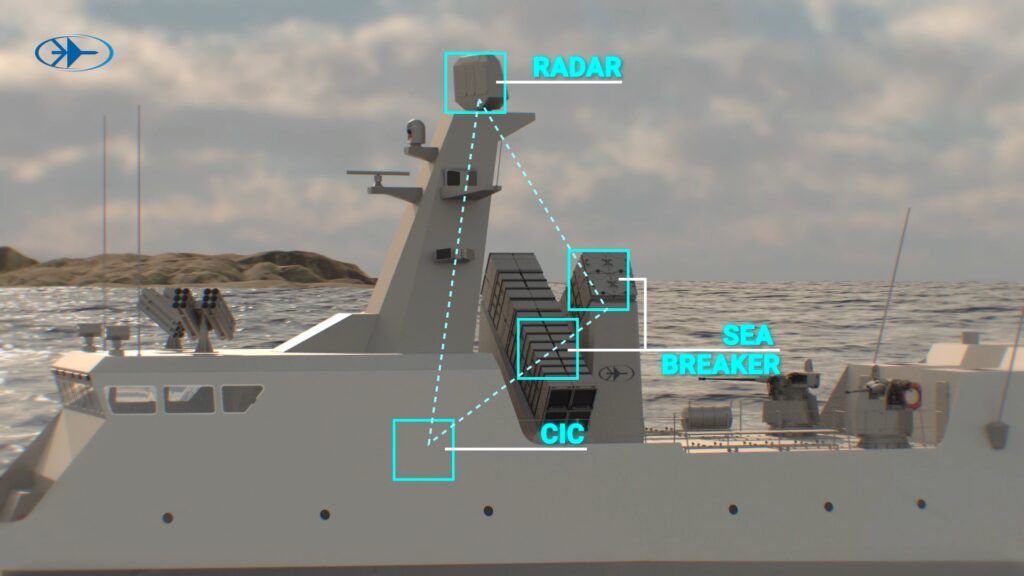 The Sea Breaker can be launched from naval platforms, varying in size, from fast attack missile boats, to corvettes and frigates. The land version is based on Rafael’s SPYDER air defence launchers, in service with the Indian Air Force.

The battery architecture supports standalone launchers, or operation as an integrated solution, with a command and control Unit (CCU) and various sensors, based on customer requirements.

While the Sea Breaker flies at “high subsonic speeds”, the Brahmos is a supersonic cruise missile and would be seen as a direct competition to the Israeli system.

Adding extra weight in favour of BrahMos is that the missile can be fired from ships, land and air. Work is also on for a submarine launched BrahMos variant.

While both missiles have a similar range, enhanced range versions of the BarhMos (600km) are already being rolled out. While 800km and 1500km range of Brahmos is under trial.

However, Rafael sources said the missile can be modified for air operation as well if a customer so needs and the speed can be made to supersonic too in future.

Rafael said Sea Breaker performs deep-learning and big data-based scene-matching, a feature that is available on the Spice 2000 that was used during the Balakot strike. The Spice 2000 is also manufactured by Rafael. The Spice 2000 uses a Digital Scene Matching Area Correlator (DSMAC) technology which automatically matches the target, as it zooms in, with the image that has been pre-fed, besides the GPS coordinates.

The Sea Breaker has full operational capability in Global Navigation Satellite System (GNSS)-denied arenas, in all weather conditions. The missile is electronic countermeasures immune and jam-resilient.

Currently, India is an important customer of the Israeli defense industry, India already using many types of equipment bought from Israel like the SPYDER, Barak-1 and 8  air defense system, etc. and India has experience in exploiting and using weapons of Israeli origin.

Indeed Sea Breaker is an excellent Cruise missile, but India already operating world fasted supersonic cruise missile Brahmos, which has excellent performance and can launch from any platform and equipped with advanced technology, so personally, i don’t think India will ever buy Sea Breaker from Rafael.