From the moment of its appearance on the world map “the country for terrorist”has been waging wars. The main enemy, naturally, is India. But besides her, there are enough opponents: there is a restlessness in the tribal zone on the border with Afghanistan, there are enough in Pakistan and various religious extremists. For wars, of course, you need weapons. If earlier the needs of Pakistan were provided by the United States and China, now it is moving to the production of its own equipment by copying other country old machines.

Since 2010, the Pakistani army has been in service with the Talha tracked armored personnel carrier. This vehicle is based on the good old American M113 armored personnel carrier . The reason for the creation of “Talha” was the US sanctions (due to Pakistan’s work on nuclear weapons), which made it impossible to license the production of the classic M113 . Visually, both cars are very similar. “Pakistani” is distinguished by the narrowed shape of the entire vehicle and other outlines of the side armor plates externally and by a different arrangement of the driver’s seat and propulsion system – inside.

An American diesel with a capacity of 275 hp can be used as an engine. or Ukrainian UTD-20 (330 hp). The basic version is armed with a 12.7 mm large-caliber DShK machine gun. In addition to it, there are such modifications as an anti-tank vehicle armed with a Baktar Shikan ATGM, an anti-aircraft vehicle equipped with a Swedish RBS-70 anti-aircraft complex, an Al Qaswa supply vehicle, a Raad self-propelled mortar, a Sakb command vehicle and others. 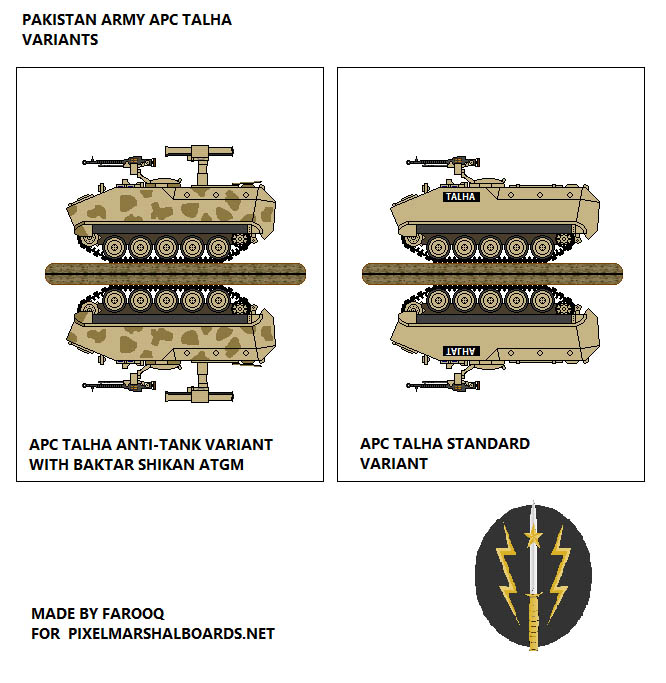 Unlike the M113, which has a running gear of 5 rollers per side, some armoured vehicles of the Talha family have 6 rollers. For example, the Al Qaswa logistics vehicle, which is associated with the need to deliver goods over difficult terrain.

On the basis of the Talha armoured personnel carrier, the Al-Hamza infantry fighting vehicle is produced, armed with a 30 mm cannon in the turret. It is structurally very similar to the American export BMP AIFV, which is also a relative of the M113.

A promising example of weapons is the Pakistani BMP “Viper” (“Viper”). The chassis of the already mentioned Talha BTR is used as a base for it. The armor has been greatly enhanced. The armament is represented by a Slovak-made module. It includes a 30mm automatic cannon, a 12.7mm machine gun and Konkurs anti-tank missiles (4 guides). “Viper” will be able to transport 12 infantrymen and reach a speed of 62 km / h.

The Pakistani police and its other internal security services are armed with the Mohafiz armored car, developed on the basis of the Land Rover Defender. Crew – 8 people (including the driver and the operator of the machine gun), the bulletproof armor protects against 7.62 mm bullets. Such vehicles are purchased by Iraq for its security forces.

The widespread worldwide fashion for MRAPs – machines that are protected from mines and capable of successfully operating against ambushes – did not escape Pakistan either. Since 2009, the development of a mine-resistant armored personnel carrier “Burraq” on the chassis of the Japanese Isuzu truck has been underway there. Due to the similarity of its front end to a cat’s face, the photos of the Burraq armored vehicle caused a certain resonance on the Internet. It was supposed to equip the car with a remotely controlled machine-gun installation and an electronic system that detonates radio-controlled explosive devices. The status of this project is currently unclear.

From the above, the following conclusions can be drawn. The Pakistanis were able to develop a family of machines conceptually similar to the American ones based on the M113 and having similar performance characteristics. Thus, the Raad mortar is an analogue of the M106, the Sakb is the M577, respectively, the Baktar Shikan vehicle is the M901 armed with the TOW ATGM. We do not see a direct analogue of the Talha-based air defense system in the US Army, but similar machines (ADATS) are in service in Canada.

The Al Qaswa supply vehicle compares favorably with the American M548 in the presence of an armored corps. Copying the American experience allowed us to gain experience and create our own production base for creating our own weapons. Maybe “Talha” and have some reduced performance compared to the M113, but this does not prevent them from being exported. The prospective BMP “Viper” is close in armament to the Ukrainian BTR-3/4, and is comparable to the Russian BMPT “Terminator” (though differing in less armor). The armored vehicle “Mohafiz” is also quite at the level of world standards. The military industry of Pakistan uses components and assemblies developed in other countries (Ukraine, Slovakia, Russia, China). But on the whole, it is developing successfully (taking into account the capabilities of Pakistan) and producing interesting products.