India successfully flight-tested its indigenously developed SMART torpedo system on Dec 8, with the Defence Research and Development Organisation (DRDO) hailing it as a “game changer” in anti-submarine warfare.

The Indian Navy has been enhancing its ability to counter Chinese submarines and control the Indian ocean.” Limited by its strength, this ambition has always been difficult to achieve. But now, the situation is beginning to change. Since Modi came to power, the Indian Navy, like other services, has greatly increased its strength. At the same time, thanks to India’s international environment, it can continue to import advanced weapons and technolog from the United States, Russia, Europe, and other countries The strength of the Indian Navy is continuing to rise. Some analysts believe that during Russian President Putin’s lightning visit to India, the military cooperation agreement signed by Russia and India for the next 10 years is likely to mean that India will be able to obtain some Russian military technology, including anti-submarine technology.

Recently, the Defense Research and Development Organization (DRDO) of India announced that the organization once again successfully tested the “Supersonic Missile-Assisted Torpedo Launching System” (SMART) in the coastal city of Balasore in the state of Odisha. Related announcements issued by the organization show that this test once again tested the relevant sub-systems of the “Supersonic Missile Assisted Torpedo Launching System” (SMART), including two-stage solid propulsion, electromechanical vibration exciters, and precision inertial navigation systems. 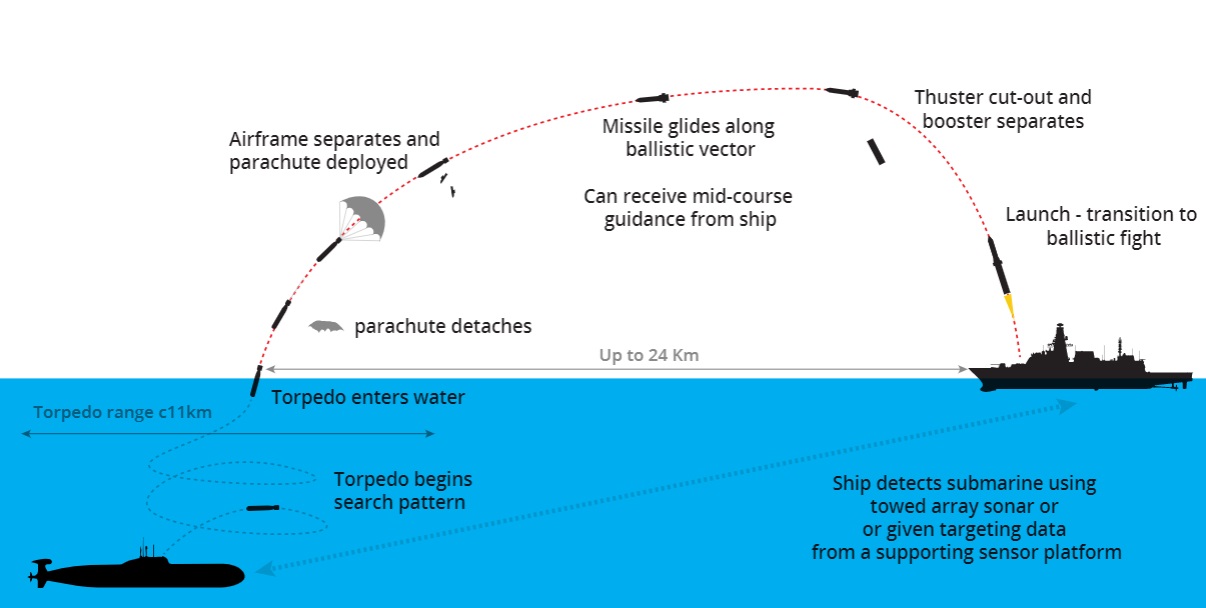 It is reported that the “Supersonic Missile Assisted Torpedo Launch System” (SMART) is actually a land-based long-range anti-submarine missile, which can be regarded as a land-based ballistic missile, but its warhead is a light torpedo. Compared with the general ship-borne anti-submarine torpedo with a range of only tens of kilometers, the “Supersonic Missile Assisted Torpedo Launching System” (SMART) has a range of about 650 kilometers and a maximum speed of Mach 3. The light anti-submarine torpedo it carries has a range of 20 kilometers and a warhead weighs 50 kilograms. After the missile sends it to the target sea area, the light torpedo slowly enters the water under the action of a parachute, and then the sonar is carried Start acting, searching for the target and launch an attack.

According to public reports, as of now, apart from India, no other country has developed similar shore-based long-range anti-submarine missiles. However, some analysts believe that this unique shore-based long-range anti-submarine missile has a promising future. It not only has a long range, but also has fast speed and strong response capabilities.

This means that the Indian Navy can operate in a fairly wide sea area if necessary. Launching anti-submarine attacks internally. If deployed on certain islands, this system can control a large area of ​​the sea. If submarine sonar arrays are deployed in some sensitive sea areas, coupled with this set of shore-based long-range anti-submarine missiles, it is enough to form a strong blocking ability that should not be underestimated.

At present, in addition to the two Russian-made anti-submarine patrol aircrafts Tu-142 and Il-38M, the Indian Navy is continuing to purchase P-8I “Poseidon” anti-submarine patrol aircraft and long-range drones from the United States. India itself is also developing some anti-submarine weapons suitable for one’s own use, this “Supersonic Missile Assisted Torpedo Launching System” (SMART) is considered to be one of the highlights. For countries with close monitoring of sea areas, this system is worth learning and researching.