The India-Russia AK-203 deal is a noticeable improvement in India’s slow and inefficient defence procurement history.

After decades of voicing concerns that the induction of a modern assault rifle is an urgent operational necessity, the Indian military is just an inch away from getting a new standard issue rifle which will replace the incumbent INSAS (Indian Small Arms System) rifle. The chosen weapon is the AK-203, which debuted in 2018, designed and developed by Russia’s Kalashnikov Concern. As the acquisition contract has reportedly been finalised and is expected to be signed soon, it would be worthwhile to recount how the process began, the two-year long negotiations, and the lessons we can take away from this most recent bid to modernise India’s armed forces.

The search for a new standard

In 1998, the INSAS rifle, developed by the Defence Research & Development Organisation’s (DRDA) Armament Research & Development Establishment (ARDE) and manufactured by the state-run Ordnance Factory Board (OFB), was inducted as the Indian military’s standard-issue assault rifle. However, from the outset, its unreliability, inefficiency, and low quality of components, such as the magazines, has hindered the armed forces’ operational capability. Trust in these rifles is so low that troops often swap them for the more reliable AK-47 and its variants when operating on the frontlines, like in Jammu and Kashmir and the Northeastern sector, under the army’s sector stores concept. Thus, it soon became evident that a replacement is urgently needed.

The chosen weapon is the AK-203, which debuted in 2018, designed and developed by Russia’s Kalashnikov Concern. 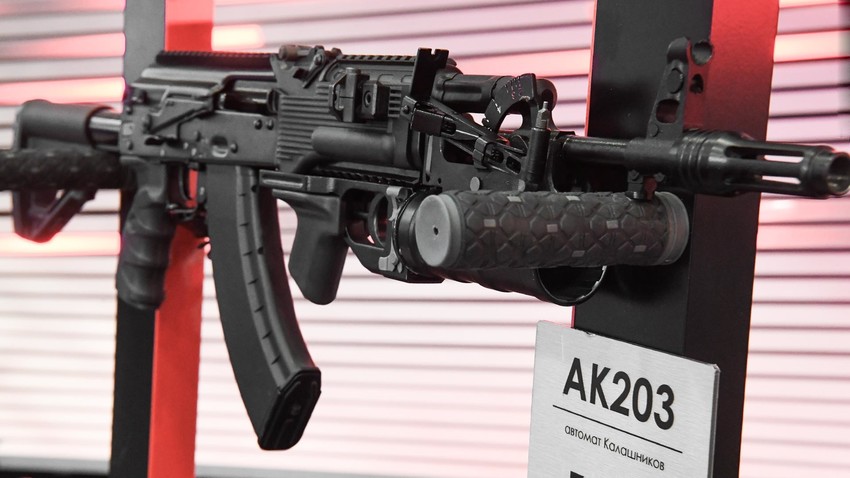 Replacing the INSAS, nevertheless, has not been easy. For instance, a debate over the calibre of the new rifles has caused significant delays and detours; 5.56×45 millimetre bullets, used in INSAS, are lighter in weight and cheaper to produce, but have lower lethality and are more likely to injure or incapacitate the target. On the other hand, 7.62×39 millimetre bullets, used in AK-47, carry more power, therefore, are more lethal and can cover a longer range. Both have distinct uses. While the former can injure one target and burden the enemy’s resources by requiring two or three others to carry the injured to safety, the latter can effectively neutralise the target. It was due to this dilemma that the Indian Army wanted to procure a multi-caliber assault rifle in the early 2010s, so that based on the situation, the calibre of the weapon can be changed. However, after four years of evaluations and field trials, this bid was deemed unsuccessful, and the corresponding tender was cancelled.

Then in July 2018, the Indian government finally decided to phase out the three-decades-old INSAS rifles from service. Moving ahead, a new approach was being undertaken. The plan was to start by importing a batch of the new weapons, and then absorbing the technology to indigenously produce them. Thereby, satisfying the immediate requirement, giving a boost to the domestic defence manufacturing sector under ‘Make in India’ and ensuring that India’s dependence on foreign manufactures for something as fundamental as an efficient and reliable assault rifle ceases. It was estimated that the tri-services will be spending at least INR 12,000 crores on the new rifles and light machine guns. It was also decided that the new rifle would be chambered in the higher 7.62 millimetre calibre.

Replacing the INSAS has not been easy.

Shortly thereafter, the AK-203, one of the latest products designed and manufactured by Russia’s Kalashnikov Concern, was selected, and in January 2019, an Intergovernmental Agreement (IGA) was signed between India and Russia. The Indo-Russia Rifles Private Limited was then set-up as a joint venture between OFB (with a 50.5 percent majority stake), Kalashnikov (42 percent), and Rosoboronexport (7.5 percent), Russia’s state-owned defence export agency, under which the rifles would be manufactured at the Korwa Ordnance Factory in Amethi district of Uttar Pradesh. In an unprecedented move, a serving Indian Army officer, Major General Sanjeev Sengar, was appointed the CEO of the factory in July 2019 to ensure quality control and on-schedule performance.

Under the Indian government’s plan, to fulfill the requirement of 770,000 AK-203 rifles, the first 100,000 units would be imported from Russia, and the rest would be manufactured at the Korwa facility. Early on, the price of each imported rifle was expected to be around US$ 1,100, including the cost related to the transfer of technology and setting up of the manufacturing factory. As negotiations progressed, it was reported that differences have emerged over the amount of royalty being asked by Russia, US$ 200 per rifle or US$ 130 million for 650,000 units to be produced in India. This would have been in addition to the cost incurred by OFB for acquiring land, setting up the Korwa factory, and training the required manpower. Further, the cost of production quoted by OFB was higher than what would be incurred if all the units were imported, leading to some in the Indian defence establishment to become more cautious toward the deal. To resolve these issues, in June 2020, the Ministry of Defence constituted a committee. Its report and recommendations, however, are not publicly known. Amidst this, the COVID-19 pandemic would also have played a role in slowing the pace of negotiations to finalise a deal.

The first 100,000 units would be imported from Russia, and the rest would be manufactured at the Korwa facility.

After almost a year of stagnation, signs of progress surfaced in September 2020 during Defence Minister Rajnath Singh’s trip to Moscow for the Shanghai Cooperation Organisation (SCO) Defence Ministers’ Meet. More recently, Chief of Army Staff (COAS) General M.M. Naravane had stated in January 2021 that “negotiations are at an advanced stage” and all issues and differences have been sorted out. It also emerged that the cost per rifle had gone down to INR 70,000 (US$ 962) and INR 6,000 (US$ 82.5) per rifle would be paid to Russia as royalty for licensed production of the AK-203. This would add up to INR 4.03 crores (US$ 55.39 million) for the 671,427 units to be produced at the Korwa Ordnance Factory. In line with COAS’s statement, even the Russian side has confirmed that “all technical and commercial issues have been agreed” and that the deal is at its final stage.

The India-Russia AK-203 deal, hence, is a noticeable improvement in India’s slow and inefficient defence procurement history. Shunning unrealistic requirements and indecisiveness, India’s defence establishment has finally swung into action and seems determined to efficiently modernise the armed forces. Furthermore, the success of this deal would set a precedent, that through close collaboration with its strategic partners, India is not only better equipped to modernise its military, but also promote the Make in India initiative and become more ‘atmanirbhar.’ India should no longer be apprehensive about “foreign collaboration” or feel the need to implement protectionist policies. Doing so would be lethal to ‘atmanirbharta.’