HAL will also next week announce a multimillion-dollar engine deal with US firm GE Aviation for 99 F404 engines to power India’s latest indigenous fighter, he said. The developments come six months after the defence ministry awarded a ₹48,000-crore contract to HAL for 83 LCA Mk-1A jets for the Indian Air Force (IAF). The first Mk-1A aircraft will be delivered to the air force by March 2024, with the rest slated to join its combat fleet by 2029.

“The preliminary design review is over and so is the critical design review for several systems, including mission computer, digital map generator and digital flight control systems. We are integrating the active electronically scanned array (AESA) radar and the electronic warfare suite on the final operational clearance (FOC) version of the LCA. After it is proven there, we will integrate it on the final Mk-1A version,” the HAL chairman said. AESA radar provides superior detection, tracking and targeting capabilities.

There are minor changes on structure design in Tejas mk1A compare Tejas mk1 (FOC) version Presently, Hindustan Aeronautics Limited (HAL) has completed the structural design phase of HAL Tejas Mk1A and final designs are likely to be cleared for production by early-2021. This will be followed by manufacturing, system integration, and around 200 test fights before Tejas Mk1A is cleared for mass production by mid-2022. Mark 1A variant of the LCA will come with around 40 major and minor improvements over Mark 1

Apart from structural changes, The Tejas Mk-1A will for instance feature a revamped Digital Flight Control Computer (DFCC) besides incorporating various new Line Replaceable Units (LRUs). While the earlier DFCC was based on the 386 series processor, the new DFCC will feature PowerPC based computing architecture. This dramatically improves computing performance. While the MkI required 24 physical connectors, the newer version would be a press-fit mechanism drastically reducing maintenance overhead.

Now as is known, the entire Tejas Mk1, Mk1A and Mk2 i.e. MWF fleet will be equipped with General Electric F404 and F414 series engines.  The Kaveri programme has as such failed to deliver a viable domestic engine that can meet the thrust requirements of even the Mk1. Although the Gas Turbine Research Establishment (GTRE) has been able to achieve the targeted dry-thrust in the Kaveri engine it has not been able to meet the wet-thrust requirement. Presently, efforts to make use of single-crystal turbine blades developed by Defence Metallurgical Research Laboratory (DMRL) as well as research into afterburner design is underway at GTRE to ‘fix’ the Kaveri design. Unless an indigenous engine becomes available when it does, there is currently no plan to develop alternate engine sources for the fleet.

The Tejas Mk1A will get a new Israeli Elta 2052 airborne active electronically scanned array (AESA) radar with more than 150 km range. The Elta 2052 has been designed for air superiority and advanced surface and naval strike missions. This radar can track up to 64 targets simultaneously at longer ranges than contemporary Pakistani and Chinese fighters. This radar enables Tejas Mk1A to simultaneously target multiple enemy fighters in combat engagements. In air-to-surface and naval missions, it provides long-range target detection, tracking, classification, and engagement.

There is a possibility Tejas MK1A can be equipped with Uttam AESA radar which is made by DRDO.

The aircraft has also been equipped with advanced autopilot capabilities like auto-level (in case of pilot disorientation), safe altitude recovery (which automatically pulls up the aircraft if it comes too close to the ground) and auto navigation modes. It also equipped with Instrument Landing System (ILS) and tactical air navigation system (TACAN), will allow the pilot to concentrate on “head-down” mission-critical requirements rather than worry about basic flying. 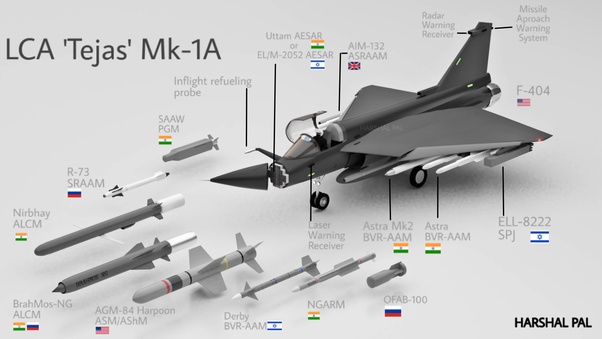 Tejas MK-1A will get more teeth compared with the earlier version of TEJAS.

Tejas can carry around 5,300 kg armaments on its seven hardpoints and has an eighth offset station for carrying various mission-specific pods like recce pods or target designation pods. In addition to internal fuel, Tejas can carry three auxiliary fuel tanks or can use an aerial refueling probe for extending range and endurance.

“The EW capability will increase survivability of the aircraft in a networked environment. With the integration of an external jamming pod, the aircraft will be able to do its duty as offensive air combat platform,” he added

HAL Tejas Mk1A and final designs are likely to be cleared for production by early-2021. This will be followed by manufacturing, system integration, and around 200 test fights before Tejas Mk1A is cleared for mass production by mid-2022. By end of the 2020, The Indian Air force is expected to sign a {45,000 crore or US$6.3 billion deal with HAL for buying 83 HAL Tejas Mk1A fighters which including spares and after-sales services. Out of these 83 Tejas Mk1A jets, 73 will be fighters and 10 will be trainer variant. The delivery of all these 83 Tejas Mk1A fighters will be completed within by 2026. Team Guarding India hopes that by 2022 HAL Tejas MarklA fighters will be entering serving with The Indian Air Force and these capable ‘Made in India’ fighters will replace vulnerable Mig-21s that have been flying for more than 50 years. Tejas Mark IA will not only replace Mig-21 numerically but also provide a qualitative edge over Pakistani JF-17 fighters.