‘INS Himgiri‘, alias ‘Project 17A’ — a Nilgiri-class frigate for the Indian Navy — was launched on Monday (i.e. December 14) at the Garden Reach Shipbuilders & Engineers (GRSE) facility here. The ‘INS Himgiri‘, which is a follow-up on the Project 17 Shivalik-class frigate, is the first of three such Project 17A (P17A)-class advanced stealth warships that the armed forces have contracted the GRSE to build. 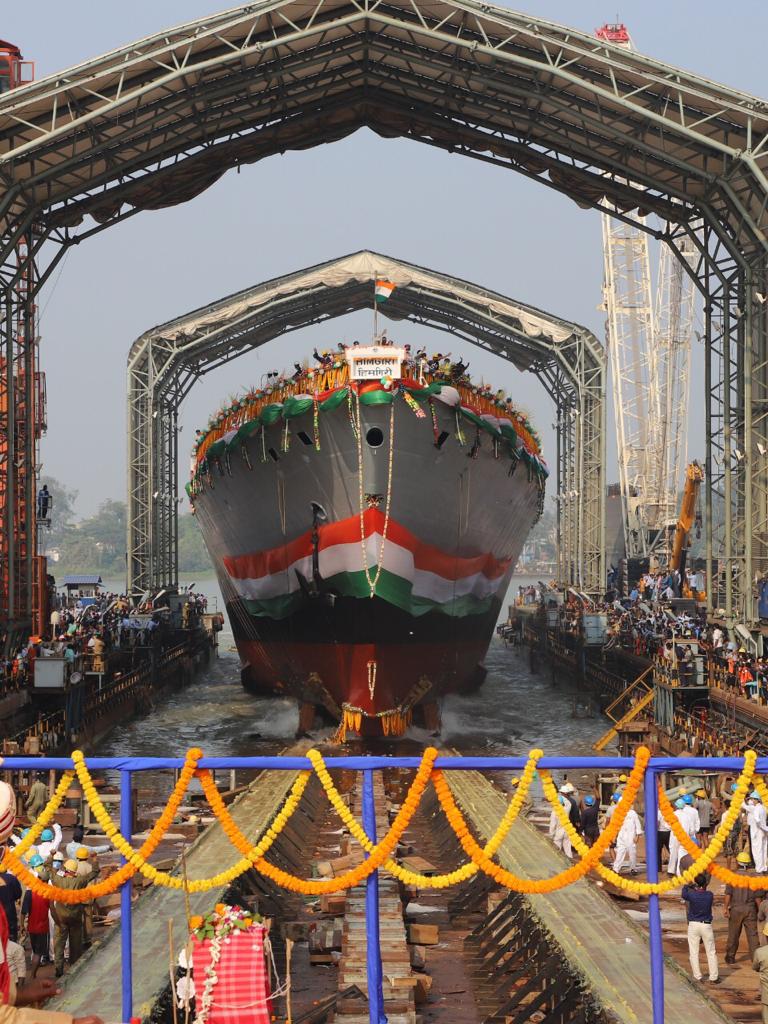 The Project 17A Stealth Frigate ‘INS Himgiri’ was launched at the GRSE facility in Kolkata in the presence of Chief of Defence Staff (CDS) General Bipin Rawat on this day, news agencies reported.

According to Defpost, the GRSE had laid the keel for the vessel two years back on November 9, 2018.

The Nilgiri-class frigate or ‘Project 17A (P17A)’-class is a follow-up on the currently-operational ‘Project 17 (P17)’ or the Shivalik-class stealth frigates.

It’s called Nilgiri-class after the lead ship, or the first major warships (now decommissioned) to be built in India, which in turn were named after hill ranges in India.

The original Nilgiri-class ships were updated versions of the British Leander class frigates. The new ones are to be named as so — INS Nilgiri, INS Himgiri, INS Udaygiri, INS Dunagiri, INS Taragiri, INS Vindhyagiri, and finally, INS Mahendragiri.

A total of seven such advanced stealth warships have been planned. Four of them will be developed by the state-owned Mazagon Dock Ltd. (MDL) in Mumbai, while the other three are to be built by the GRSE in Kolkata.

The new vessels are built with indigenously developed steel and will be incorporated with the latest stealth features, including improved roll stabilisation and a discreet visual profile so as to voyage in a trice into enemies during maritime conflicts.

The Project 17A (P17A)-class frigates also feature state-of-the-art weapons systems and sensors along with advanced Integrated Platform Management, according to Defpost.

The report also elaborates on how the P17A frigates will be “powered by two GE LM2500 marine gas turbines and two diesel engines in a combined diesel or gas (CODOG) turbine configuration.”

The LM2500 gas turbines are being assembled right here in India by the Industrial and Marine Gas Turbine division of the state-owned Hindustan Aeronautics Limited (HAL).

The new warships, in a major deviation from earlier frigates, also features a high-level of automation, which is estimated to cut operational costs by around 20% and, in turn, result in higher operational availability due to its productive effectiveness, on part of the modular integration construction. Thus, the crew compartment has also been reduced from the existing 257 (including 35 officers) to about 150 now.

The P17A-class will be armed and ready with the state-of-the-art Barak 8 and BrahMos surface-to-air and supersonic cruise missiles to defend against any type of airborne threat, including aircraft, helicopters, anti-ship missiles, and UAVs as well as ballistic missiles, other cruise missiles, and combat jets.

The weapon systems will be flush deck mounted allowing vertical launch of missiles from under the deck.

Amplifying the stealth measures, the Project 17A-class will have a covered mooring deck and the number of antennae on the ship will be reduced using the EL/M-2248 MF-STAR multi-function Active Electronically Scanned Array (AESA) radar. It will also brandish the Ajanta Electronic Warfare (EW) system and the HUMSA-NG Sonar system.

The construction of the first ship started in 2017, and all of them are expected to be delivered by 2022 at an anticipated cost of over Rs 45,000 crore in total. Each vessel is supposed to cost over Rs 4,000 crore.