By 2023, TAPAS combat drones will be introduced into the Indian military. A total of 76 TAPAS UCAV will deliver to all three branches of the Indian armed force.

Few days back it was reported that Hindustan Aeronautics Limited (HAL) will start working on producing six airframes to conduct evaluation trials of the TAPAS BH-201 drone, which will be used for missions by the armed forces. The airframe is the basic structure of the drone or unmanned aerial vehicle (UAV) and includes its wings, tail, and main body.

Confirming the development to The Indian Express, chairman and managing director of HAL, R Madhavan said, “We are now going to make some more airframes for TAPAS. Six airframes will be made for the user evaluation trials. This is a joint project by HAL and DRDO. TAPAS has to reach 30,000 feet which it has almost reached and has proven the endurance (hours spent in the sky) of more than 16 hours. Once the airframes are put to user trials, the production will start.” In March this year, DRDO chairman G Satheesh Reddy said TAPAS had reached a flying altitude of 28,000 feet. 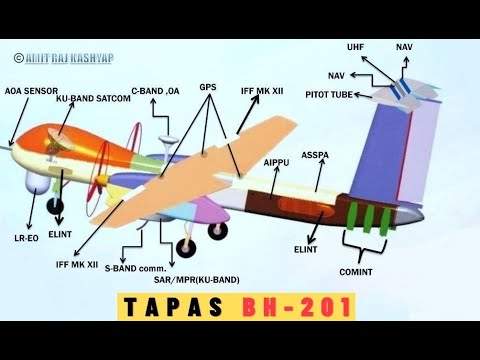 TAPAS will have an operating altitude of 30,000 feet. It has a ferry range of 1000 km and is capable of day and night missions. It can carry payloads up to 350 kg. It is designed to perform intelligence, surveillance, reconnaissance missions for the Indian Armed Forces. Its mission requirements are to provide continuous wide area coverage and be able to identify small targets. TAPAS BH-201 is India’s first MALE UAV.

The LOS communication range of TAPAS is 300 km, whereas its SATCOM has a range of more than 1000 km. TAPAS is equipped with ELTA’s ELL-8385 is an integrated Electronic Support Measures (ESM) and Electronic Intelligence (ELINT) System. The system is designed to cope with the challenges of modern dense radar environments and to perform long-range, high endurance ESM/ELINT missions. The uav is equipped with Israeli EO pod.

In 2021 it was reported that India procured 30 multi-mission armed Predator drones from the U.S. for the three services at an estimated cost of over $3 billion (around ₹22,000 crores). But later the deal was canceled for high cost and some other unknown reasons.