Faced with threats from two adversaries along its borders, the Indian Air Force is now investing in producing an advanced Electronic Warfare (EW) suite for its fighter jet fleet.

The Ministry of Defense and industry partner Bharat Electronics Limited (BEL) recently signed an agreement to supply the Indian Air Force with an advanced Electronic Warfare suite for its fighter aircraft. The contract’s total cost is projected to be around Rs 1993 crores (approx $26.5 million)

The delivery of modern EW systems will considerably improve the battle-survivability of IAF fighter aircraft while flying operational missions against ground-based and airborne fire control and surveillance radars of opponents.

IAF’s EW suite deal becomes significant after the 2019 confrontation of the Indian Air Force with Pakistan fighters following the Balakot strikes as well as the standoff with China in the Eastern Ladakh region where both sides had mobilized their respective combat aircraft.

The EW suite was created and developed in-house by the Defence Research and Development Organisation (DRDO). The project embraces the spirit of Atmanirbhar Bharat and will aid in the realization of the journey to self-sufficiency, according to the Ministry officials.

The BEL would be developing the Instrumented Electronic Warfare Range (IEWR), EW equipment at a cost of Rs 1109 crores, The New Indian Express reported. The IEWR will be used to test and assess airborne electronic warfare (EW) equipment and validate their deployment in an operational setting, according to the Ministry of Defense.

The Defence Research and Development Organisation is India’s premier defense development agency which had earlier developed the ‘Shakti’ EW system for the Indian Navy. Designed for Capital Warships of the Indian Navy for the interception, detection, classification, identification and jamming of conventional and modern Radars, it was handed over to the Navy in November last year.

The first Shakti system was deployed on the INS Visakhapatnam and is currently being installed aboard the INS Vikrant, India’s indigenous aircraft carrier to become operational later this year.

The DRDO has also developed the ‘Uttam’ AESA radar to aid Electronic Warfare operations making India one of the few countries with an indigenous force multiplier that is used in electronic warfare. With only one imported subsystem, the Indian AESA radar is 95 percent indigenous.

With an ability to track 50 targets in the sky across a distance of more than 100 kilometers and engage four of them at the same time, the Indian home-grown AESA radar ‘Uttam’ was displayed by the DRDO at India’s Republic Day parade this year. This radar is supposed to be integrated onboard the LCA Tejas aircraft.

A powerful electronic warfare capability is required in today’s hotly contested battlespace. The Indian Air Force is set to benefit from an advanced EW technology that provides pilots with an information advantage.

The goal of EW is to deny the opponent the advantage of having unrestricted access to the Electromagnetic spectrum while ensuring friendly access. EW proved decisive in Vietnam when bombers of the United States Air Force carried jammer pods to minimize losses from surface air missiles. 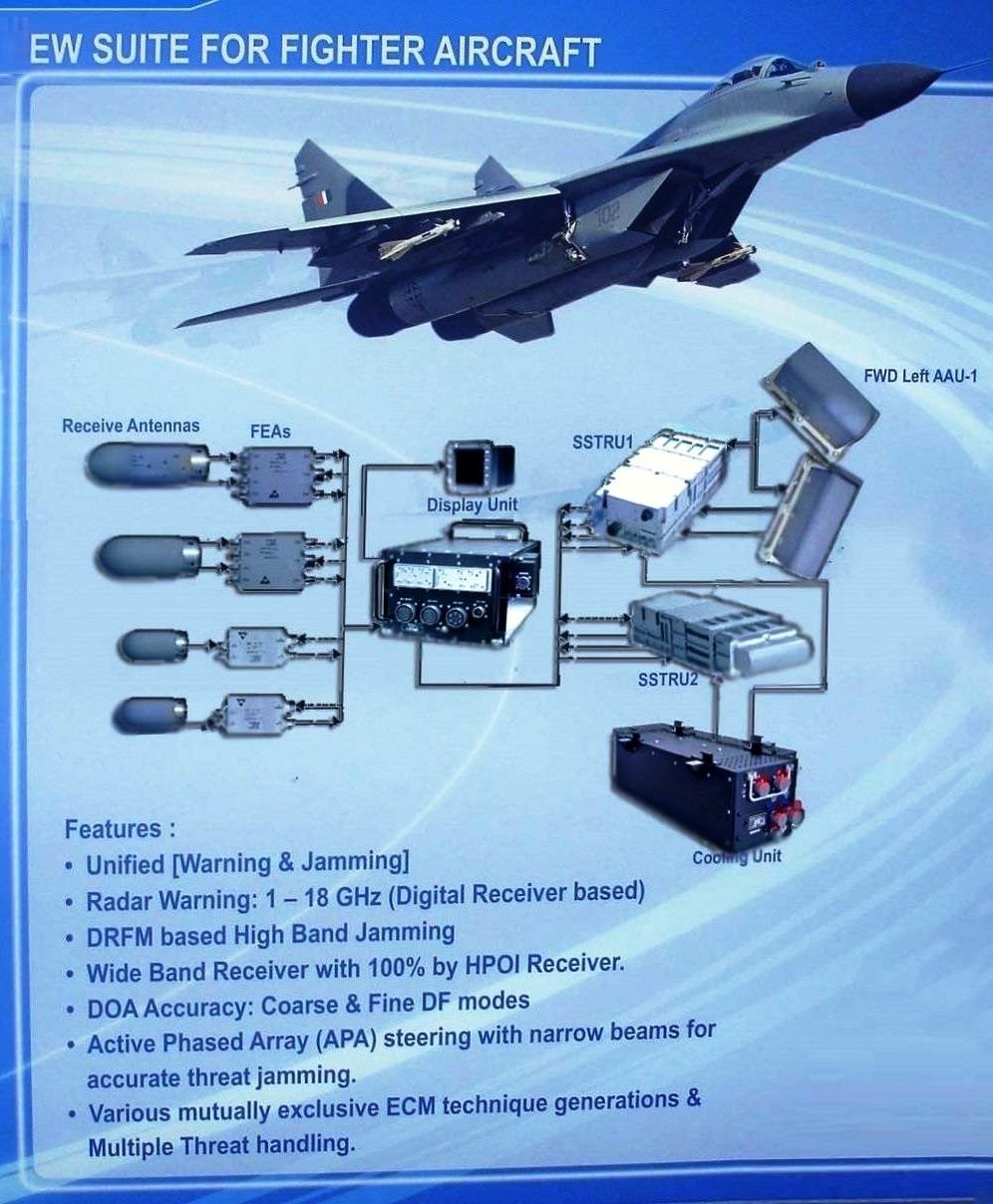 Further, the Israeli Air Force’s Operation Mole Cricket 19 during the Gulf War demonstrated how integrated air defenses were vulnerable to a mix of EW and SEAD/DEAD aircraft.

Across the border, India’s biggest adversary wields the J-16D aircraft. The J-16D is a Chinese-developed electronic warfare derivative of the J-16 fighter jet that has been updated to improve precision capability and operational maneuver on the axis of information and communication, resulting in the installation of a blanket aviation electronic system.

It’s a multi-role, twin-seat aircraft with EW pods mounted under the fuselage. Its purpose is to conduct electronic reconnaissance as well as communication and radar jamming.

The EW pods allow it to evade enemy radar systems as well as to conduct seamless monitoring and deception. The J-16 is also equipped with air-to-air missiles, allowing it to engage in both conventional and electronic warfare.

On the other hand, the United States has the EA-18 Growler electronic warfare aircraft. The Growler is a F/A-18 Super Hornet variant, which is set to be deployed in Germany to boost NATO’s eastern flank as a war is being fought in Ukraine.

The wingtip pods shown on the EA-18 Growler are part of the aircraft’s internal AN/ALQ-218 system, despite the fact that the aircraft’s EW suite is classified. A radar warning receiver, electronic support measures, and electronic intelligence functionality are all included in one comprehensive package.

The Growler can identify, describe, and geo-locate enemy radars because of these qualities. It would also help with data collection on enemy transmissions. As part of its Next Generation Jammer program, the US Navy is apparently looking at improved EW pods for the EA-18G Growler.

Sophisticated militaries the world over use electronic warfare systems as the modern-day battlefields are dependent on information suites. With Indian Air Force getting its own EW system, its operational and combat capability could be expected to rise significantly in a volatile regional security architecture.