France has always been one of the leading aviation powers in the world, so it has been since the advent of the first aircraft. French aviation was one of the strongest during the First World War. 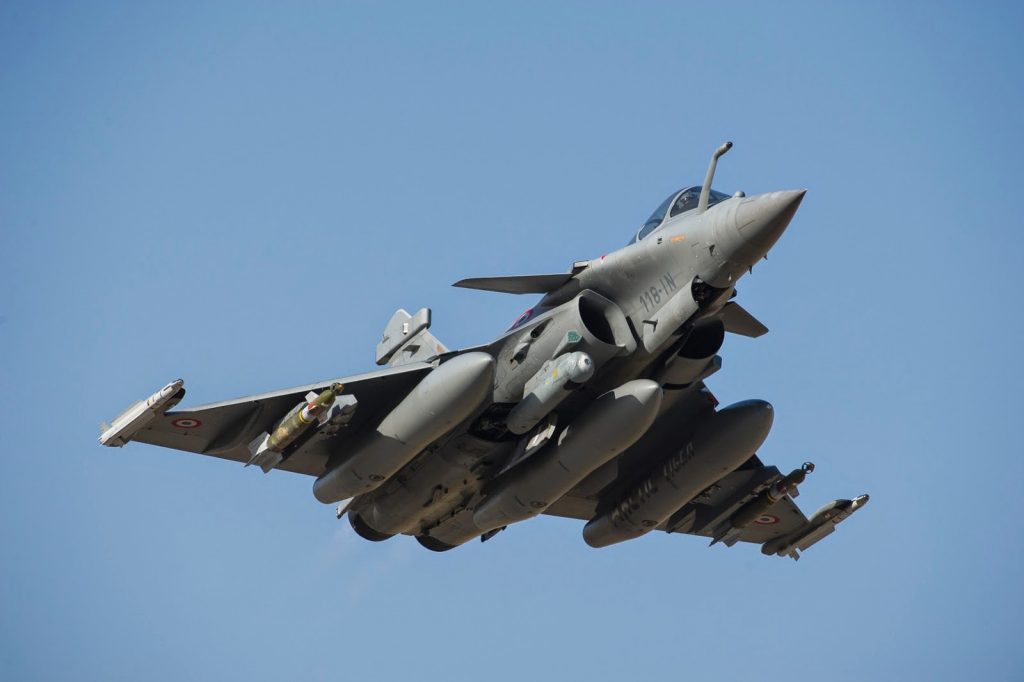 Rafal belongs to the 4.5 generation of fighters, this aircraft is a completely French project, foreign companies did not take part in its development, there are no components manufactured in other countries. Currently, this fighter is considered one of the best in the world.

There are six modifications of Dassault Rafale:

Multipurpose fighter Rafale made according to the “tailless” scheme, with a triangular wing of a large area with large influxes. In front of the machine there is an additional highly located horizontal tail.

The wing has two-section slats and one-section ailerons. Part of the wing is made of titanium alloys, part of carbon fiber.

The power plant is twin-engine, located at the rear of the aircraft. Rafale – single-engine car.

When creating the machine, composite materials were actively used. One of the tasks that faced the designers of the “Dasso Aviation” was to reduce the radar visibility of the fighter. Composite materials account for 20% of the aircraft area and 25% of its mass. In addition to reducing the visibility of Rafale, this allowed to gain and gain in mass.

It should be noted that although the designers of “Dasso Aviation” paid great attention to reducing the radar visibility of the aircraft, they did not copy the American experience in this direction, but went their own way. As a result of this, simpler and, most importantly, cheaper solutions were found. Particularly problematic from the point of view of radar visibility of the part of the fighter (front edges of the wing and plumage, landing gear) got characteristic sawtooth edges, which significantly reduced their visibility.

The modification for the Navy is distinguished by a reinforced chassis design, a special brake hook on the rear of the fighter, as well as a special Telemir system, which synchronizes the operation of the aircraft and ship navigation systems. As a result of such changes, the “marine” Rafale is five hundred kilograms heavier than the land modification.

The aircraft power plant consists of two twin-circuit turbojet engines SNECMA M88-2-E4, which are built using the latest technologies and materials used in this area.

They have single-crystal turbine blades, a low-smoke combustion chamber, and disks made of powder alloys. The SNECMA M88-2-E4 has excellent characteristics, high controllability, and an excellent ratio of developed thrust to engine mass. SNECMA M88-2-E4 has a modular design, which greatly facilitates its maintenance and repair.

The development of engines for this fighter was a very difficult task. The customer required a product that reliably worked when performing various tasks on an airplane (maneuverable air combat, high-speed air defense system breakthrough). At the same time, the engine had to have a large resource, excellent thrust-weight ratio and low fuel consumption. The SNECMA M88-2-E4 installed on Rafale became the first French third-generation turbojet engine.

All Rafale aircraft are equipped with landing gear manufactured by Messier-Dowty, their legs are retractable forward. The chassis of ground and deck based fighters are different, in the latter they are reinforced.

Cabins for single-seat Rafales are equipped with Martin-Baker Mk.16 ejection seats, and the cab lantern opens to the right. The pilot’s seat is characterized by excellent ergonomics. Data on the operation of aircraft systems and flight and navigation information is displayed on liquid crystal monitors.