The first two of six T129 ATAK helicopters made by Turkey will be delivered to the Philippines this December.

On 18 December 2018, The Philippine Air Force decided to purchase 6 T129 ATAKs for counterterrorism and ground support missions. The first batch of 6 T129 ATAK tactical attack and reconnaissance helicopters produced by Turkey with a total contract price of more than 269 million USD will arrive in the Philippines this December.

The ATAK Helicopter Program was initiated in response to the requirements of the Turkish Armed Forces for a tactical reconnaissance and attack helicopter. On March 30, 2007, Turkey negotiated with AgustaWestland to jointly develop and produce 51 attack helicopters based on the Agusta A129 Mangusta.

About 95% of the initial parts of the T129 serial production are made in Turkey. Under the agreement, Turkey has full rights for marketing and intellectual property rights to the T129 platform. Turkey can also export the platform to third-party countries, excluding Italy and the United Kingdom.

However, the T129’s LHTEC CTS800-4N gives the US a veto over any potential export sales and so Turkey has developed its own TEI TS1400 engine. On April 22, 2014, TAI officially delivered the first production T129 ATAK to the Turkish Army. The T129 ATAK of the TAI/AgustaWestland joint venture is a twin-engine, 2-seat, multi-role, all-weather attack helicopter based on the Agusta A129 Mangusta, which can be used in anti-armor roles, armed reconnaissance, ground attack, escort, symmetric fire support, and short-range air defense.

The helicopter is designed for attack and reconnaissance missions in hot, high, and geographically harsh environments both day and night. 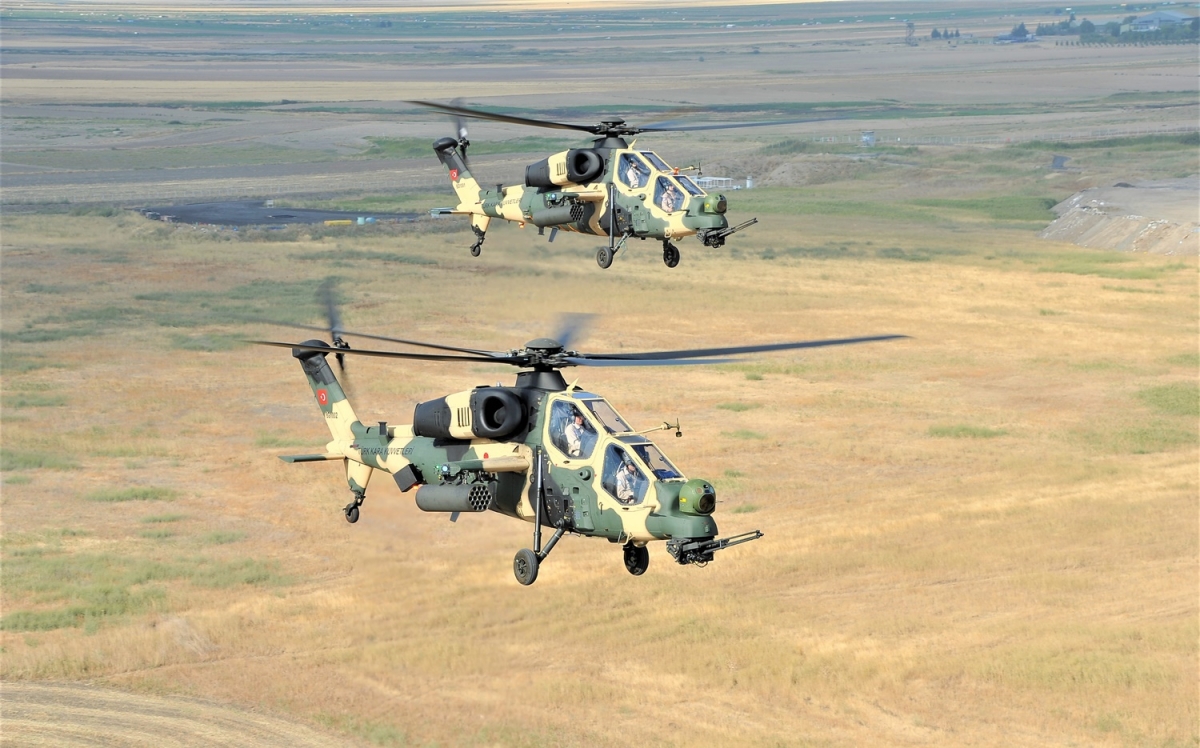 The T129 ATAK is equipped with a three-barreled 20 mm rotating cannon in the nose with 500 rounds and 76 unguided 70 mm rockets for air support. The helicopter is also equipped with eight long-range UMTAS 160mm anti-tank missiles, 16 Cirit 70mm missiles, and eight short-range Stinger air-to-air missiles launched from the air.

This system allows the automatic orientation of target and weapon detection systems to the pilot’s line of sight with high accuracy. The helicopter is also equipped with a specialized ASELFLIR-300T electro-optical FLIR system for multi-target missions manufactured by the Turkish company Aselsan. The features of the T129 ATAK helicopter also include high maneuverability, high impact resistance, and ballistic resistance.

This helicopter is in service with the Turkish Army and other branches, including the Gendarmerie. On April 25, 2015, a pair of T129s was used in combat for the first time in an anti-terrorism operation in Siirt province (Turkey).

On February 10, 2018, A  Turkish T129 ATAK attack helicopter has been shot down by YPG’s anti-aircraft fire in Kırıkhan district in the southeastern province of Hatay, killing two soldiers.

In 2013, Azerbaijan placed an order for 60 T129 helicopters but was later rejected by TAI. It is reported that, in 2018, Pakistan signed an agreement with Turkey to buy 30 T129s. Since August 2018, the manufacturer has not obtained the necessary export license from the US Department of Defense for the LHTEC T800-4A engine for the T129 and the manufacturer has been looking for an alternative engine.

In 2021, Turkey begins to replace the LHTEC T800 with the native TEI TS1400 engine. Potential and future operators may include Saudi Arabia, Brazil, Qatar, Iraq, and Morocco.

A good candidate for the Philippine Air Force

The Philippine Air Force (PAF) is looking to purchase affordable dedicated attack helicopters to augment its fleet of light armed helicopters such as the MG-520 and AW-109E, which are being used for anti-terrorism and ground support.

The T129 is integrated with avionics, modified airframe and weapons systems developed by Turkey, with upgraded engines, transmissions, and propellers. T129 ATAK is also equipped with advanced electronic warfare and countermeasures systems to increase survivability on the battlefield, such as radar warning receivers, radar frequency mixing systems, laser receivers systems and counter fire, infrared systems for the night. T129 ATAK is equipped with an integrated control system Hunter Kaska specially designed for these helicopters.

Previously, in May 2021, the Philippine Department of Defense announced that the first two helicopters from TAI would be delivered in September. It is not clear why the deliveries moved to December.

The T129 is said to use the LHTEC T800-4A turboshaft engine, produced through a joint venture between the American company Honeywell and the British company Rolls-Royce.

Previous reports have said that Turkey may face problems with the export license of engines from the US after it was sanctioned by Washington for buying the S-400 missile system from Russia. But the US has approved an export license for Turkey to sell attack helicopters to the Philippines.

According to The Daily Sabah – a Turkish publication, the Philippine Air Force will be the first foreign air force to use the ATAK. The 15th Attack Squadron of the PAF unit will get these attack helicopters. The first group of T129 ATAK Philippine pilots and crew arrived in Ankara in May and completed training in September 2021.

Six Super Tucanos, worth 4,698 billion pesos, enter service by the end of 2020. PAF officials say these new additions to the 15th Attack Squadron, particularly the T129 ATAK, will help the unit to get high combat power as expected.