France is developing an advanced version of its Rafale fighter aircraft the F4 version that would come with enhanced stealth, powerful electronic warfare systems, and new weapons. The new Rafale F-4 fighter is expected to bring connected solutions, increasing the effectiveness of the aircraft in network-centric warfare.

According to the announcement of the French Ministry of Defense, the tests of the Rafale F4 fighter aircraft took place at the Istres air base in the south of France and have obtained positive results.

The test involved crews from the French Direction générale de l’armement (DGA), the French Navy, the French Air and Space Forces and representatives of the defense company Dassault Aviation.

During the test, 2 Rafale F4 fighters flew in a formation of 8 fighters (2 Rafale Ms, 2 Mirage-2000s and 2 Alpha Jets) performing actual combat situations. Eight complex missions, representing 50 sorties of the Rafale F4 were successfully carried out during the test flight. 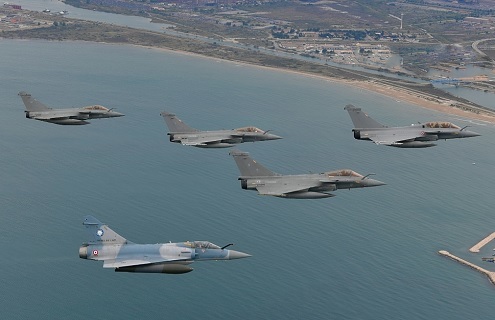 Looking back at the Rafale fighters, the F1 standard was the first version of the French. Rafale F1 aircraft are equipped with air-to-air weapons, but not yet equipped with air-to-ground weapons to perform a variety of military combat missions. The F2 standard allows the Rafale to perform air-to-ground attack and reconnaissance missions. The two most modern standards at the moment, the F3 and the F3R, allow Rafale to engage in nuclear weapons, as well as use air-to-air and ground-attack missiles with high precision.

The French Air Force has ordered 12 of these standard aircraft to replace the old Rafales sold to Greece. If the agreement between Croatia and France ends smoothly, surely the French Ministry of Defense will soon sign a contract to buy the next 12 Dassault Rafale F4s to make up for the shortfall due to being sold to this country.

The Rafale F4 version is the latest improved version of the Rafale family, with the most modern French aeronautical technologies. The F4 version marks a new step forward after the F1 versions (only for the French Navy), the F2 version (prioritizing ground attack capabilities), the F3 and F3R versions (multitasking).

Rafale fighter aircraft entered service with the French Navy in 2004 and for the French Air Force in 2006, gradually replacing 7 types of previous-generation fighters.

Rafale has experienced real combat (mainly attacking ground targets) in many different battlefields such as: Afghanistan, Libya, Mali, Iraq and Syria. Of the 180 units ordered by France to date, 152 have been delivered.

The Rafale fleet currently has a total of nearly 270,000 flight hours, including 40,000 combat hours. A total of 96 Rafale aircraft have been ordered by Egypt, Qatar and India. However, the Rafale is still a “hard to sell” combat, due to its high cost, low integration of weapons and inconsistent sales policy of France.

The A-10 Thunderbolt II -“WARTHOG”