The overall design of the aircraft carrier is a process of continuous optimization. First, a top-level design is required. The life cycle of an aircraft carrier will reach 40-50 years, costing billions of dollars, involving hundreds of industrial sectors, and long-term planning of aircraft carrier projects must be carried out at the national level. Then carry out the conceptual design, determine the overall technical scheme, and finally carry out the detailed scheme design.

An aircraft carrier is a highly technically intensive and complex system equipment that can be divided into multiple subsystems. The subsystems are interconnected and restricted to each other to form an organic whole. The overall design of the aircraft carrier needs to comprehensively consider various factors, reconcile the conflicts of various systems, and realize the coordination of the functions and operational capabilities of each system.

In order to meet the needs of personnel, carrier-based aircraft, defensive weapons and related systems, aircraft carriers need to be equipped with a large amount of food, ammunition, spare parts and other materials. The huge amount of materials puts forward high requirements on the material support environment of aircraft carriers, especially to ensure dangerous goods such as fuel and aviation ammunition.

The hangar is a place for storing and maintaining carrier-based aircraft. It needs to occupy the height of 3-4 decks. It adopts a column-free structure with a length of more than 200 meters. It also has a large opening to facilitate the entry and exit of the carrier-based aircraft. The structure is designed There are very high requirements. In order to prevent accidents, it is necessary to install fire isolation doors and automatic fire protection facilities in the hangar. The surrounding cabins are generally arranged as service cabins such as spare parts warehouses and machining cabins. 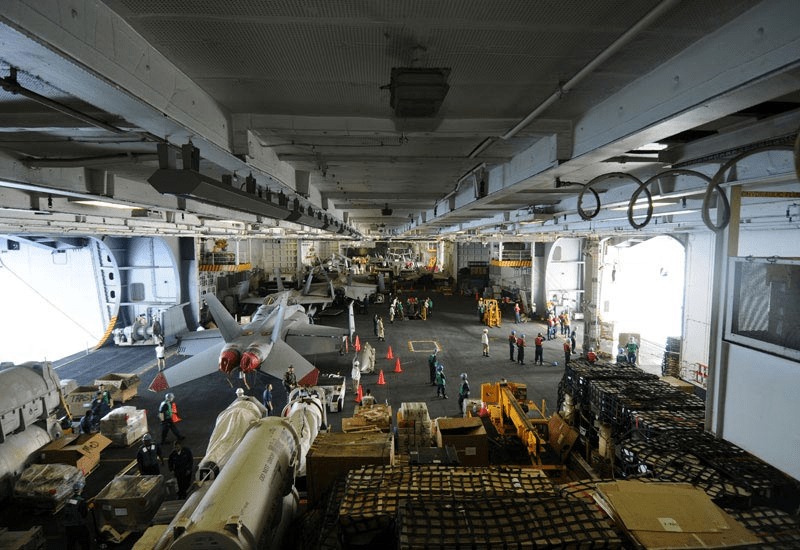 The most notable feature of the aircraft carrier is the large flight deck. The design of the flight deck will directly affect the take-off and landing efficiency of the carrier-based aircraft. Modern aircraft carriers are designed with angled decks, and the choice of angle is very important, which directly affects the size and shape of the three major areas: take-off area, landing area and parking area.

The aircraft carrier is currently the largest war weapon of mankind, and its complexity tests the comprehensive strength of a country. I believe that in the near future, China’s nuclear-powered aircraft carrier will gallop on the ocean.