In June this year, Defence view reported that India initiates the groud trials of stealth UCAV SWiFT drone. In October a subscale demonstrator for India’s secretive Ghatak stealth drone was spotted recently during a trial. A video and images of the demonstrator called Stealth Wing Flying Testbed (SWiFT) have recently surfaced.

However, the Indian Ministry of Defense or the Defense Research and Development Organization (DRDO) has not issued an official statement, which is fully responsible for the project.

In terms of appearance, the SWiFT corresponds, broadly, with previous artist’s concepts and scale models of the drone and, more generally, of those of the Ghatak, with which it shares a flying-wing planform and an engine intake located above the forward fuselage. While the trailing edge of the drone is difficult to make out, it appears to have a classic tailless flying wing profile, providing an overall arrowhead shape, rather than the highly cranked wing found on other stealthy drones, such as the Northrop Grumman X-47B. Its trailing edge is less swept than other designs, like Russia’s S-70, for instance. It is said that the shape of this UAV will serve as the overall design idea of ​​the future Ghatak UAV.

Although India has not announced the specification of the drone and the photo is also very blurry. But from the size of the engine’s tail nozzle and landing gear tires, the size can still be basically judged. It is estimated that the SWiFT drone is about 4 meters long, has a wingspan of more than 4.8 meters, and weighs about 1 ton. The tires of the landing gear in the photo are very large, which also shows the color of the aircraft’s verification machine. It is likely to be a reduced-size demonstration aircraft of the Ghatak UCAV, rather than a full-size unmanned fighter aircraft. 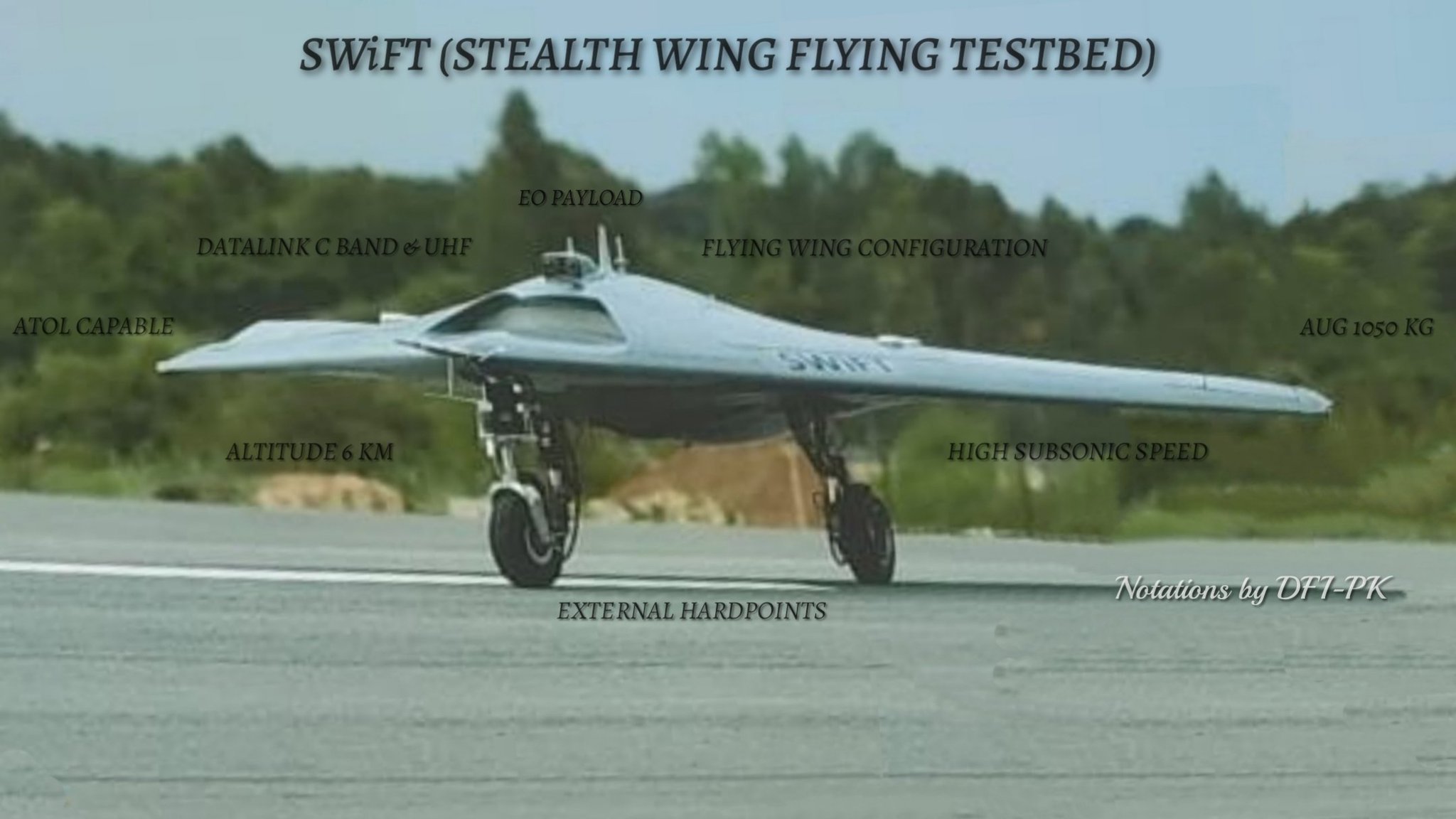 From the Video and other scale model photos, the Ghatak UAV is an unmanned bomber with an internal weapon bay that can carry a variety of air-to-ground ammunition. And from the screenshots of the video, there are antenna arrays and sensor fairings on the top of the fuselage. These must be related to the test work, not to complete military combat tasks.

The power unit of the SWiFT UAV is believed to be a Russian-made Saturn 36MT engine, which is a small turbofan engine used to power cruise missiles.

Looking at the drone from the back, it has designed a concealed engine exhaust, which may be able to reduce infrared and radar signals. However, due to the lack of power of this small turbofan engine, if it is to be installed on a larger Ghatak unmanned bomber, a new power system is required.

Russia’s Sukhoi S-70 Okhotnik-B “loyal wingman” of the Su 57, but there are several problems. The most important thing is that the “Hunter” UAV cannot achieve stealth.

Although the “Hunter” UAV uses a stealth design, especially the flying wing layout similar to the B-2 stealth bomber, it has an excellent stealth effect. But its large-diameter engine nozzle completely destroyed the stealth layout.

Due to the factors of the prototype, the tail nozzle of the high-power turbofan engine currently used by the S-70 is exposed without any stealth processing. It will become a huge radar and infrared signal source, completely destroying its stealth layout.

At present, stealth technology and flying wing layout are no longer so advanced designs. Advanced drones in many countries have adopted this design, and even the latest drones in India have adopted similar designs.

However, the handling of details is still the embodiment of the technology of various countries. For example, India’s new flying-wing UAV uses stealth nozzles to close the engine nozzles inside the fuselage and perform stealth treatment. However the S-70 UAV is almost equivalent to a regular fighter plane and requires a powerful and high-power turbofan engine, so it is more difficult to design a stealth nozzle.