With a long coastline of more than 7,800km, the Indian Navy faces the challenge of protecting the country’s maritime interests at all times.

The navy continues to add key assets to its fleet, based on its strategic requirements and to maintain its dominant position as one of the major naval forces in the world.

Naval Technology details some of the major future ships of the Indian Navy.

Vishal will be the most expensive defence platform of India, subject to funding approval from the Ministry of Defence (MoD). Still in its conceptual phase, the proposed aircraft carrier will join INS Vikramaditya and INS Vikrant, the latter of which is expected to undergo sea trials by the end of 2020. Vishal will be the second indigenous aircraft carrier after Vikrant.

With three carriers, the Indian Navy will have the capability to ensure the availability of at least two carriers at sea, while the other undergoes overhaul, repair and maintenance in the yard. Vikrant will be developed with catapult assisted take-off but arrested recovery (CATOBAR) capability and an electromagnetic launch system (EMALS). Its advanced catapults will enable the launch of heavier and larger aircraft. Although it was previously planned to be nuclear-propelled, the Indian Navy scrapped those plans.

The third aircraft carrier’s significant $7bn cost estimate (excluding the cost of fighter jets) and budget woes have, however, impacted the progress of the development. Vishal is expected to enter service in the 2030s.

INS Vikrant, on the other hand, has completed basin trials at Cochin Shipyard Limited’s (CSL) facility in Kochi in November 2020. The 262m-long aircraft carrier has a displacement of 40,000t and is expected to carry up to 40 fighter aircraft. Equipped with a short take-off but arrested recovery (STOBAR) mechanism with ski-jump, it is anticipated to join the Indian Navy’s fleet by the end of 2021 or early-2022.

The programme requires the two Indian firms to work in collaboration with one of the foreign firms, including Russia’s Rubin Design Bureau, Germany’s ThyssenKrupp Marine Systems, France’s Naval Group, South Korea’s Daewoo Shipbuilding & Marine Engineering, and Spain’s Navantia. Technical and financial bids for the project are anticipated to be submitted by the end of 2020.

The Indian Navy plans to acquire a total of 24 submarines, including six nuclear-capable submarines. A project to build a new class of 13,500t ballistic missile submarines is also underway. Known as S-5, the submarines will be twice the weight of the Arihant-class submarines and have the capacity to carry 12 nuclear missiles, according to Indian media. Final design work for the submarine is ongoing. Furthermore, the proposed $17bn Project 75 Alpha nuclear-powered attack submarines (SSN) programme is progressing, with the preliminary design phase completed as of February 2020.

The Visakhapatnam class (Project 15B) is a class of guided missile destroyers currently under construction for the Indian Navy. The class comprises four ships – Visakhapatnam, Mormugao, Imphal and Porbandar all of which are being built by the Mazagon Dock Limited (MDL) in India, and will be the largest destroyers to be operated by the Indian Navy.

The destroyers are an improved version of the Kolkata-class (Project 15A) and will feature enhanced stealth characteristics. The first ship is expected to enter service in 2021.

In 2019 The Cabinet Committee on Security had cleared the deadly weapons and sensors package for the four guided-missile destroyers under construction at Mazagon Docks in Mumbai, which will take the overall project cost of the four stealth warships to around Rs 35,800 crore. 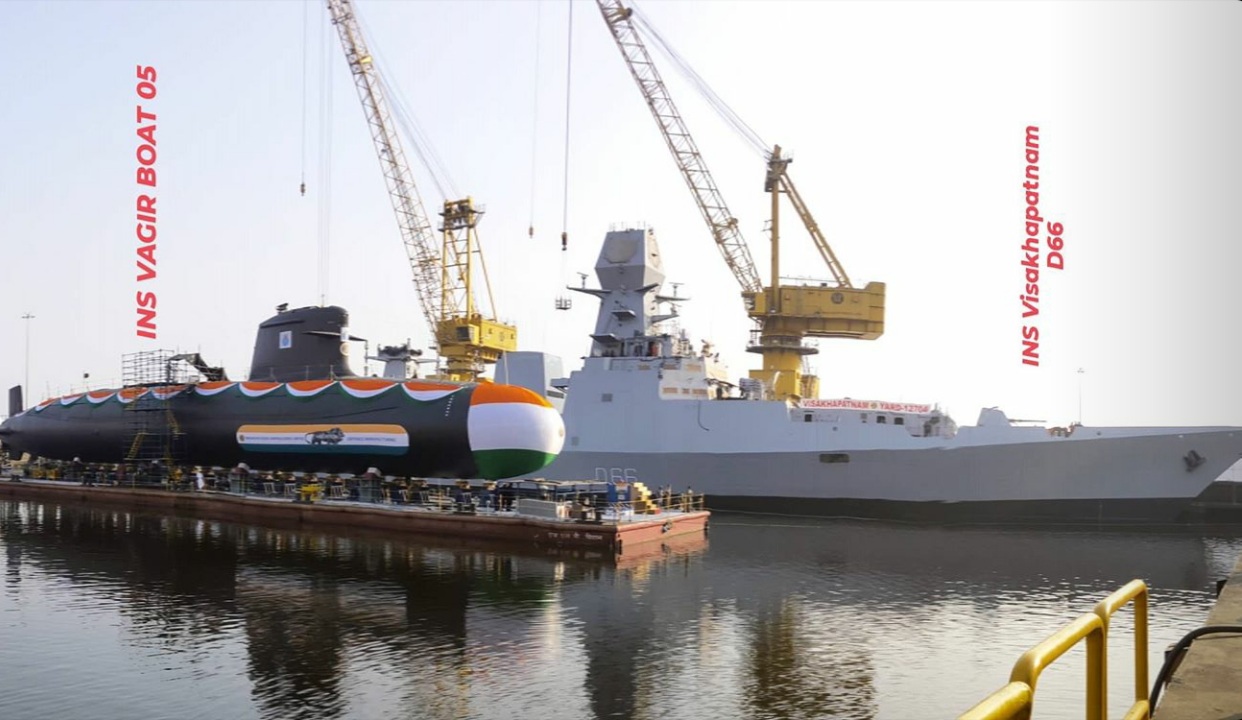 6,150 crore acquisition cost of a wide range of advanced weapon systems and sensors for the four 7,300-tonne destroyers being constructed under ‘Project-15B’. The first of the destroyers, INS Visakhapatnam, is likely to be commissioned in 2021-2022 after some delay. It will be followed by her sister warships, INS Mormugao and INS Imphal, while the fourth is yet to be named.

All four will be armed with precision-strike BrahMos supersonic cruise missiles as well as the next-generation Barak surface-to-air missile systems, among other weapons like 127 mm main guns and rocket launchers. While BrahMos has been developed jointly with Russia, the Barak-8 is a collaboration between Israeli. Aerospace Industries-Rafael and the Indian Defence Research and Development Organisation.

“While the Rs 29,644-crore fixed cost component for construction of the destroyers was inked in 2011, the variable cost component, which includes the weapons and sensors, has now been cleared by the CCS,” a source said.

The Project 17A programme, which will deliver seven advanced frigates, was approved by the Indian Government in February 2015 to enhance the Indian Navy’s combat capability. MDSL will construct four Nilgiri-class frigates while GRSE will build the remaining three, under the project worth approximately Rs500bn ($7bn). The lead ship of the class, INS Nilgiri, was launched in September 2019 while the keel of the third frigate of the class was laid in September 2020.

Based on the Project 17 Shivalik-class, the stealth frigates will be fitted with weapons, sensors, and integrated platform management system. The ship will provide significantly improved air defence capabilities due to the integration of the Barak-8 surface-to-air missile that can be fired from a vertical launch system with the capability to launch multiple missiles simultaneously. It will also be armed with BrahMos, the world’s fastest supersonic cruise missile.

A larger 127mm-calibre main gun will offer enhanced range while the multi-function surveillance track and missile guidance radar (MF-STAR) will enable the detection of multiple air and surface stealth targets at the same time. The 6,670t guided-missile frigate will be powered by two MAN Energy Solutions’ diesel engines and two General Electric LM2500 gas turbines. It will have a top speed of 28k while the range is expected to be 5,500nm.

The Indian Ministry of Defence will acquire five new fleet support vessels for the Indian Navy. A $2.3bn contract was signed between Hindustan Shipyard Limited (HSL) and the TAIS consortium between five Turkish shipbuilders for the collaboration to design and build the vessels.

The first ship will take four years to complete, while the remaining will be built ten months apart from each other. To be built indigenously through technology transfer from the Turkish consortium, the fleet support vessels will be used to transport food and ammunition for replenishment. Anadolu Shipyard, which is part of TAIS, will provide design and technical support to HSL for building the 45,000t ships.

India also approved the procurement of six next-generation offshore patrol vessels (NGOPVs) for the Navy in August 2018. Each NGOPV will displace approximately 2,500t and carry more than 150 people, including 20 officers and 130 sailors. To be deployed both in blue and littoral waters, the vessels would be used for protection of offshore assets, search and seizure operations, surveillance missions, and maritime interdiction. 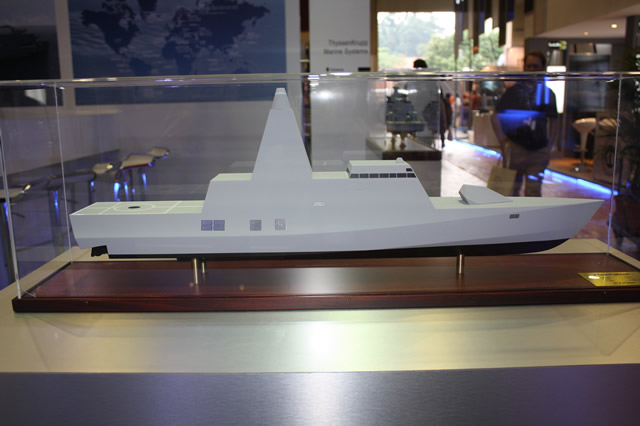 The Indian Navy placed contracts with CSL and Garden Reach Shipbuilders & Engineers (GRSE) for the construction of 16 anti-submarine warfare shallow watercraft (ASW SWC) ships in May 2019. CSL and GRSE will build eight ships each, with deliveries expected to start from 2022. The ASW SWC warships will have lower draught and be incorporated with indigenous integrated platform management systems, propulsion, and auxiliary equipment.

Being procured under a $1.88bn project, the ASW ships will boost the Indian Navy’s coastal shallow-water anti-submarine warfare capability. The ships will provide coastal subsurface surveillance and mine-laying capabilities and support submarine-hunting operations in shallow waters.

The ASW SWC will be 70m-long with a displacement of 700t. Its stealthy design will offer low acoustic and infrared signature. The warship is expected to be equipped with an ASW combat suite, including hull-mounted sonar, low-frequency variable depth sonar (VDS), torpedo tube launcher, rocket launcher,and fire control system, as well as a remote control gun with optronic control.