The controversy about a “battle on paper” between the two lines of American F-35 fighters and Russian-made Su-35 not going to ended soon.

The US magazine National Interest recently posed a situation to simulate a simulated battle between Russian Su-35 fighters and US-made F-35s and made a few interesting recommendations.

The article notes that Russia’s Su-35 fighter has attracted a lot of attention in the Western military media, Moscow is currently making great efforts to modernize its weapons and military equipment and The Su-35 is a prime example. 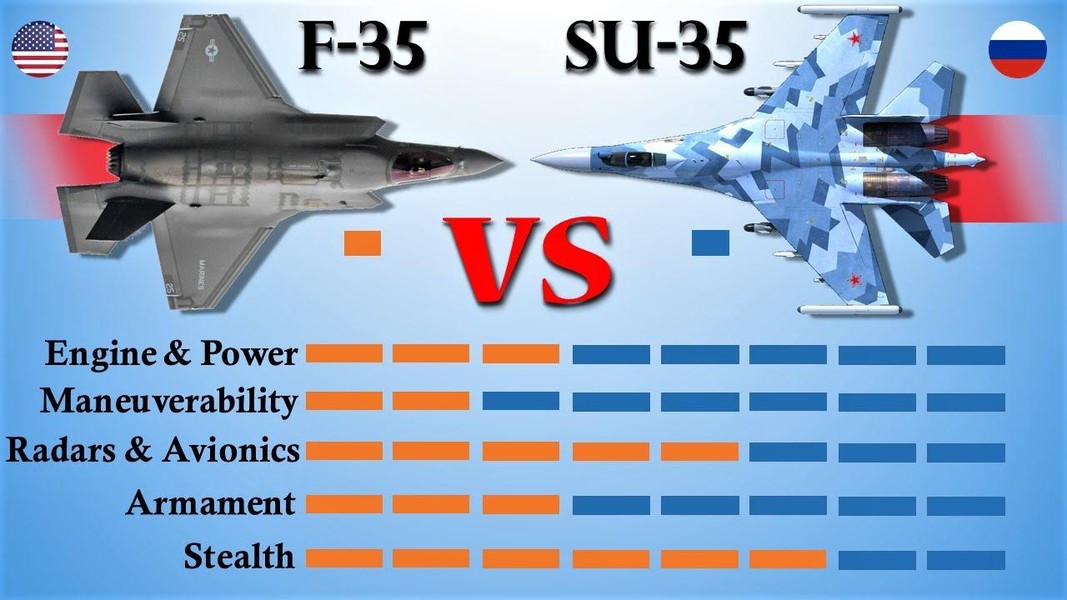 “How will four F-35s react to four Su-35s? Most likely it will change course and call the F-22 Raptor and F-15C Eagle,” the author explained because those are fighters designed for air superiority.

Unfortunately, in actual combat conditions, it is not always possible to choose the optimal solution, so it is possible that the F-35 pilot will have to manage on his own instead of relying on his teammates.

According to the author, if the above situation occurs, the F-35 pilot should use the aircraft’s stealth capabilities as well as the advantage of the advanced avionics system to fight out of sight, avoiding close contact. close range, otherwise the F-35 can easily shot down by the Russian Su-35.

This statement may surprise some people, but the fact is that the F-22 Raptor was originally designed for aerial combat, and the F-35 Lightning II was not designed for this.

National Interest emphasizes that the F-35 is not as maneuverable as the F-22, and even the F-16 or F/A-18. So when it comes to the Su-35, there is only reasonable maneuvering of the aircraft. The newcomer hopes to win.

The next thing to note is that the US Air Force currently has only 187 F-22s, and the size of the F-15C fleet is also shrinking. In a real war, commanders would have to use the F-35 to gain air superiority.

The document confirms that the Su-35 fighter has been purchased by a few countries around the world and this is a “really dangerous combat vehicle”, in many respects inferior to the latest versions of the F-15, or even surpass them.

If the Su-35 loses a bit in top speed when placed next to the F-15 (Mach 2.35 max speed vs Mach 2.5), it’s going to overtake it when accelerating, and at low loads, the engine can maintain supersonic speed without using the afterburner of the engine.

Whereas at low speeds, the Su-35 has an insurmountable advantage, its AL-41F1S engine is equipped with a thrust vector that can control the jet stream in three dimensions and offers incredible maneuverability. surprised.

But besides that, it is unlikely that the F-35 has really lost its advantage thanks to being equipped with AIM-9X close-range air-to-air missiles capable of “locking the target after launch”, making the maneuverability advantage of The Su-35 is somewhat reduced.

Not only that, the engine of the F-35 is also applied infrared signal hiding technology, which will create many difficulties for the R-73 heat-seeking missile that the Su-35 carries to be able to aim.

In short, the above statements are still only theoretical, which fighter is really stronger will only be shown most clearly through the results of confrontation in the field.