F-16 “Falcon” fighter, one of the iconic equipment of the US Air Force. Since the aircraft entered service with the US Air Force Over 4,600 aircraft have been built since production was approved in 1976. As far as jet fighters are concerned, F-16 is the third most produced fighter jet in history and still counting.

In addition to serving the US Air force, more than 50 different versions of the aircraft are in service with the air forces of 24 countries around the world.

As one of the most successful air superiority/multi-role fighters in history, there are quite a few variants of the F-16! However, no matter how it is upgraded and updated, the overall appearance of this fighter has not changed much over the years, and the model with a conformal fuel tank added on the fuselage has only been launched in recent years.

Yes, you read that right! This fighter is also called F-16, to be precise its model is called F-16XL. If there is no prompt, you may not be able to associate it with the F-16 from the appearance alone, but it is indeed an upgraded version of the F-16 fighter built by General Dynamics, but it has never been in service!

In 1977, some three years after the first F-16 took to the skies and one year before it would enter service, its designer began work on what would come to be called the F-16 SCAMP, or the Supersonic Cruise And Maneuver Prototype. The effort wasn’t about fielding another production fighter–General Dynamics had no intention of trying to sell SCAMP once it was complete. Instead, the entire premise behind the program was to quickly (and cheaply) field a platform they could use to test the concept behind supersonic cruising, or as we’ve come to call it today, “supercruising.”

Modern fighters like the F-16 all come equipped with afterburners they can use to dramatically increase the amount of thrust their engine produces, but it comes at a serious cost. Using the afterburner to break the sound barrier and then sustain that speed depletes an aircraft’s fuel very quickly, it is no exaggeration to say that half a tank of fuel can be burned with one afterburner!

“I remember flying in an F-16 in afterburner while supersonic over the Yellow Sea and looking down to see a fuel-flow rate of over 50,000 lbs per hour,” said pilot Justin “Hasard” Lee

Such consumption is undoubted “luxury” for a fighter jet that could only carry 7,000 pounds of fuel (Earlier F-16 model), and the F-16A with full fuel can only fly for less than ten minutes in full afterburner.

So the designers of General Dynamics started a modification program for the F-16 so that the fighter could maintain supersonic flight for a long time, which is SCAMP.

So how to increase the speed of the fighter with the same power output? The answer is to change the aerodynamic layout! To achieve this goal, General Dynamics designers began to reinvent the F-16.

The modified F-16 wing has become a triangular wing similar to the French Mirage 2000 fighter jet. This design can increase the lift of the fighter by about 25% and effectively reduce the flight resistance;

The trailing edge reverse-bend design is adopted at the wing end of the wing, which enhances the handling performance of the aircraft in high/low speed conditions.

Second, cancel the tail and increase the internal space of the fuselage

Since the delta wing layout is used, the rear wing naturally does not need to exist. At the same time, the increase in the wing area can also free up more fuel storage space for the aircraft. The modified F-16XL fighter’s wing surface area is doubled compared to the original model. 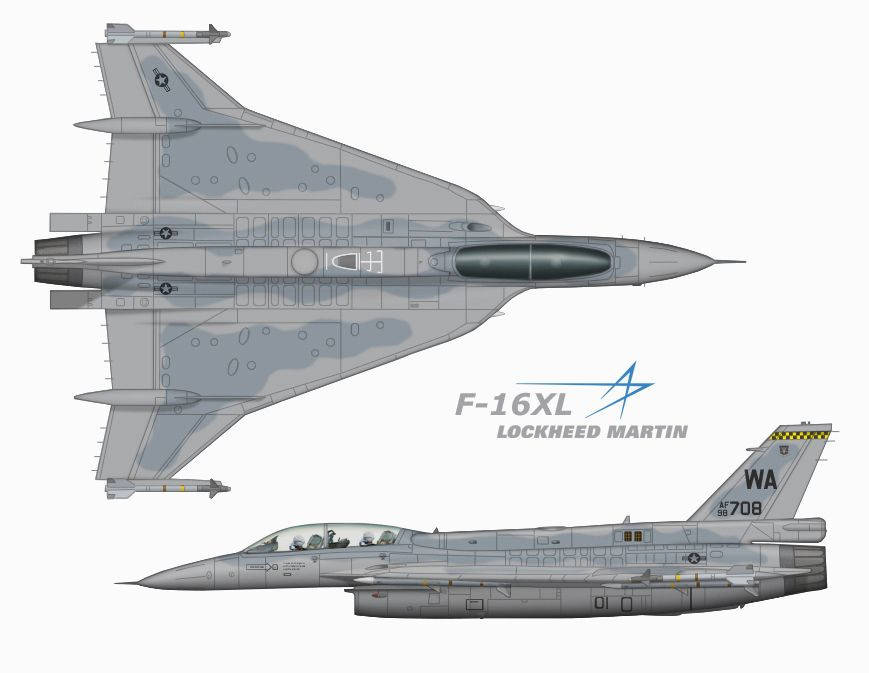 Third, the fuselage was enlarged, the tail fin was eliminated, the rudder was strengthened, and more composite materials were used.

After such a big change, the fighter jets in front of people look like this. Except for the air intake, you can hardly find the shadow of the original F-16 on this aircraft.

Tests have proved that the F-16 SCAMP can carry twice the payload of the original F-16 when performing air-to-ground missions. The designer added 27 external hardpoints to the aircraft under the huge delta wing. At the same time, the aircraft’s range is also increased by 44% (without the auxiliary fuel tank). In the state of carrying standard air combat weapons, the range of the F-16 SCAMP is about twice that of the F-16A.

Of course, these indicators are not the main purpose of the transformation. In terms of flight speed, the F-16 SCAMP can be about 83 knots (about 42 m/s) faster than the F-16A using the same power state, and in the case of afterburner The maximum flight speed of the aircraft is about 2300 km/h (F-16 is about 2100 km/h).

Harry Hillaker once said: In the state of carrying the same load, the F-16 SCAMP can perform +7.2G maneuvering overload, while the F-16 at that time was only about +5.58G.

The excellent performance of the F-16 SCAMP also caught the attention of the US Air Force after the test flight.  In March 1981, the Air Force announced that it was looking to develop a new advanced tactical fighter to replace the F-111 Aardvark, and General Dynamics entered the F-16XL in the competition.

But it wasn’t the only aircraft competing for the contract. Standing between the F-16XL and operational service was another highly capable platform: The F-15E Strike Eagle.

Like the F-16XL, the Strike Eagle was a modified version of an existing fighter: The F-15 Eagle. The Eagle represented America’s top-of-the-line air superiority fighter, boasting an undefeated record in dogfights that holds to this very day. Unlike the F-16XL, however, the F-15E shared the vast majority of its design with the two-seater F-15D that was already in production.

However, the F-15E basically does not have such a problem. In addition, the F-15E with inherent advantages also surpasses the F-16XL in performance indicators such as maximum flight speed and flight ceiling. Although the F-16XL can carry more ammunition, But in the comprehensive evaluation, this advantage item has no extra points at all.

The most deadly point is the ETF project’s requirements for a mission aircraft: it needs to be a fighter jet that can penetrate deep into enemy airspace to perform interception and ground attack missions without fighter escort.

The F-16XL seemed to have all the merits the Air Force could have wanted, and yet in the end it opted to go with the McDonnell Douglas F-15E Strike Eagle. Among the factors was that the F-16XL would have required far more effort, time, and notably more money to put into production – while the Strike Eagle’s two engines meant it had more thrust and the ability to carry more weapons.

The ETF contract was awarded to McDonnell Douglas, and the two F-16XL prototypes were returned to the Air Force. The aircrafts were placed in storage at Edwards Air Force Base (AFB), Mojave, California and that could have been the end of the story.

However, in 1988, the aircrafts were taken out of storage and provided to NASA for further research. After receiving serial numbers #849 and #848, the planes were used in a program designed to evaluate aerodynamics concepts to improve wing airflow during sustained supersonic flight.