The Malabar series of maritime drill started as bilateral in 1992 with just the Indian Navy and the US Navy. The Japanese Navy joined these drills in 2015, and now in 2020 the Australian Navy will be joining in the drill.

Exercise Malabar, scheduled to commence from November 3, 2020, in the eastern Indian Ocean has assumed significance since the navies of all the Quad countries (Australia, India, Japan and the US) will be participating in this exercise for the first time since 2007. Due to the strict COVID-19 protocols in place, the exercise this year is being conducted as a ‘non-contact, at sea only’. The focus of this drill with four friendly navies will showcase the high-levels of synergy and coordination and their commitment to an open, inclusive Indo-Pacific and also a rules-based international order.

“Australia joining the drill after a long gap is being perceived as an endorsement of the importance these four countries’ attribute towards maintaining the existing rules-based international order and a free and open Indo-Pacific,” Commodore Anil Jai Singh, a former submariner & Indian Navy Veteran, tells Financial Express Online.

According to the Indian Navy, the 24th edition of MALABAR Naval exercise will be in two phases starting November 3.

Details of the Exercise

The first phase of the exercise to commence off Visakhapatnam in the Bay of Bengal is between Nov 3-6 which will involve the Indian Navy; Royal Australian Navy (RAN); Japan Maritime Self Defence Force (JMSDF) and United States Navy (USN).

The Malabar series of maritime drill started as bilateral in 1992 with just the Indian Navy and the US Navy. The Japanese Navy joined these drills in 2015, and now in 2020 the Australian Navy will be joining in the drill.

More about Phase I

The friendly navies will carry out complex and advanced naval drills. These will include surface, anti-submarine and anti-air warfare operations. And also, weapon firing exercises, cross deck flying, and seamanship evolutions.

According to the Indian Navy, in mid-November, the second phase of the drill will be conducted in the Arabian Sea.

Commodore Anil Jai Singh, who is also Vice President Indian Maritime Foundation, says “In the wake of the Quad Foreign Ministers meeting in Tokyo in early October and the subsequent Indo-US 2+2 Ministerial Dialogue in New Delhi last week, the conduct of Exercise Malabar is a clear indication of the hardening of the position Japan, Australia and India are now taking vis-à-vis China in response to its belligerence across the region in the last six months or so.” 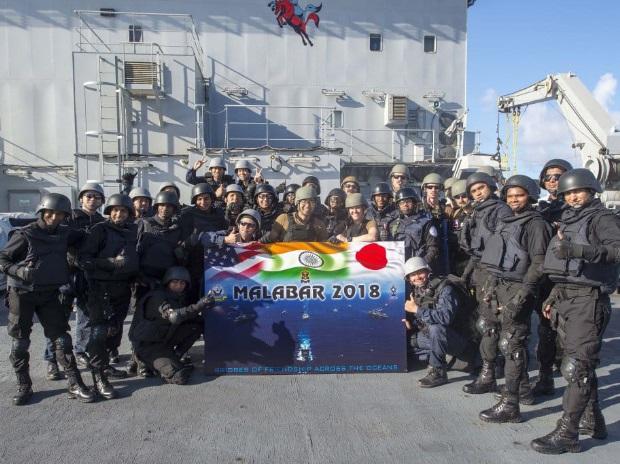 “However, it should not be assumed that the participation of all four navies in Malabar is an indication of a developing naval or military alliance amongst them. While the United States has made no secret of the military dimension of its approach to China in the Indo-Pacific with the antagonism more than reciprocated by China in its bid for regional maritime domination, the other three countries are more circumspect in their approach and despite recent provocation such as the continuing Chinese-initiated stand-off along the Line of Actual Control in the high Himalayas, a calibrated approach would be the more pragmatic option,” Commodore Singh cautions.

In his opinion, “The participation of these four navies in Malabar is an important step forward in improving interoperability, validating joint protocols, enhancing maritime domain awareness, augmenting network centricity and exercising a range of maritime security challenges from the sub-conventional, non-traditional and transnational to the more advanced warfighting kinetic options. Such an exercise also enhances the ability of these navies to seamlessly cooperate even in bilateral and trilateral scenarios.”

“The euphoria surrounding Malabar notwithstanding, a sobering thought for India should be that two of these navies have a limited capacity to maintain a sustained presence and support operations in the Indian Ocean which is India‘s primary area of responsibility and critical to India’s economic and security well -being. In fact, just a few days ago there was a mention in the Australian media that Australia is withdrawing its only ship operating in the western Indian Ocean due to its commitments in the Pacific,” Commodore Singh concludes.